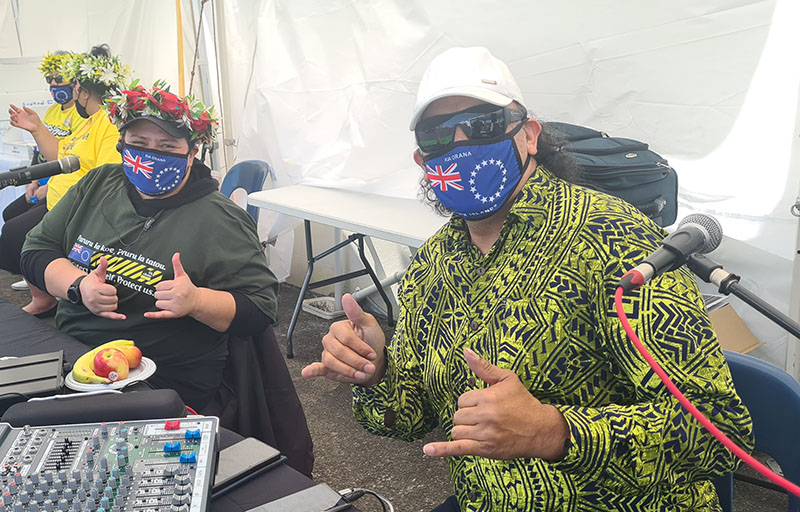 John Kiria, right, entertain the crowd at the Kuki Airani Vaccination Drive Through Centre in Mangere this week. BYRON BROWN/21092444

A ‘Kuki Airani Vaccination Drive Through Centre’ was organised and held at the Atiu Hall in Mangere for Cook Islanders including those stranded in New Zealand this week.

Close to 500 Cook Islanders, including some who are stranded in Auckland, took advantage of the vaccination drive in Mangere this week.

The organisers of the vaccination drive are aiming to ultimately have 1000 people receive the Pfizer jab to protect themselves from the Covid-19.

Cook Islanders came armed with umbrellas as it was a wet week in Auckland and their face masks branded with the Cook Islands flag across their faces.

In regular competitive Cook Islands spirit, the islands and villages of those who received the jabs were recorded to see which island or village has the highest vaccination rate.

John Kiria, a Pacific liaison officer and cultural advisor working in New Zealand and helping out with the vaccination drive, says although the Pasifika population in New Zealand is very large, the number of Pasifika people getting vaccinated has been noticeably low.

Because of this, Pasifika communities including the Cook Islands and Niue have decided to come out with pop-up vaccination drive-throughs such as the one held in Mangere this week.

While explaining the reason behind the Kuki Airani Vaccination Drive Through Centre initiative, Kiria said Cook Islanders felt more comfortable to come forward and receive the vaccine if surrounded by their own people.

“It is to encourage our own people, especially those with language barriers who might feel insecure going somewhere they don’t feel comfortable. With this at least coming here they are familiar even with the doctors and Cook Islanders around them.”

More volumes of people were seen coming through since the first day of the drive, which Kiria said was great to see.

After speaking with many Cook Islanders, he said that there were still a wide range of people with different thoughts and opinions regarding the vaccine, including negative ones. “This is not for us to push them; we don’t want to be mean or create quarrels between families because of different beliefs. We just want to encourage everyone it (the vaccine) is here – take it or leave it.”

Kirianu Nio, a Rarotonga-based dentist who travelled to New Zealand for a bereavement, was among volunteers who helped run the vaccination drive.

“I have been here for almost two months. My family is back in Raro, so I am eager to go back whenever it’s possible. Being in lockdown is not a very good feeling. I feel that everyone is feeling the same, we all can’t wait to return home to their loved ones,” Nio said.

He said the vaccination drive was very excellent idea and well run.

“It’s great to see it’s your own people here doing something positive with that being to vaccinate everyone to be protected against the virus in this critical time.”

Nio said he was humbled with the opportunity to help out as a volunteer for such a good cause.

“It’s always been my passion to support any work regarding the health of the Cook Islands people. I am always supportive of any initiative that will bring our people together and help them with their health concerns,” he said.

John-Paul Wilson, Team Cook Islands chef de mission, and Temaeva Mateariki were two other Cook Islanders volunteering and helping out, while waiting in Auckland for the greenlight to return home.

They said it was great to see so many Cook Islanders coming to get vaccinated “as it is the only way that they can get home”.

“We are waiting patiently for Uncle Mark (Prime Minister Mark Brown) to let us come home. It would be good to be able to go soon,” said Wilson.

Mateariki added: “Please get the jab, that’s the only way we can get back home.”