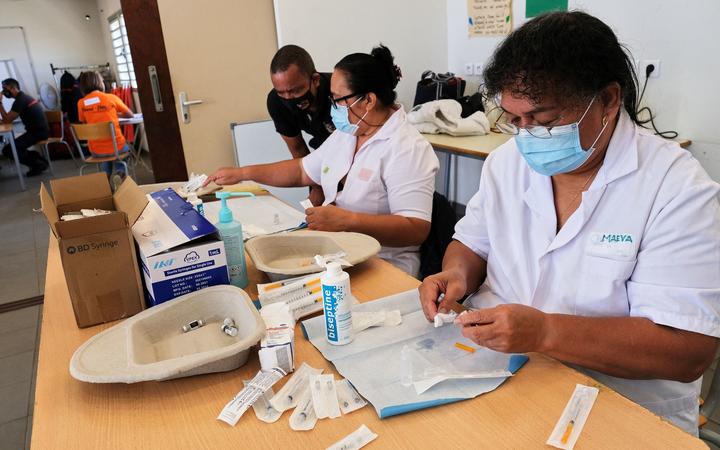 A vaccination center against the Covid-19 is set up at the Magenta Tower in the north east of the capital, Noumea. Photo: Clotilde Richalet / Hans Lucas

The government of New Caledonia has asked the French army to help deal with the Covid-19 outbreak as the territory's medical services are stretched.

Almost 10,000 people have tested positive for Covid-19 since the virus was detected in the community in early September, and more than 200 of them have died.

The government said within three weeks the military could set up 10 intensive care units at the main Noumea hospital and treat between 30 and 60 people over several weeks.

In addition, an air bridge is being set up to France to transport five intubated patients and others needing care in order to relieve pressure on the Noumea hospital, where in the past month 1,300 patients had been admitted.

To that end, an Aircalin airliner is being modified.

About 90 percent of critical care units are in use amid concern that a second Covid-19 wave is likely to sustain demand while the hospital needs to maintain capacity for patients suffering from other conditions.

Currently, 69 Covid-19 patients are being cared for in hotels, mainly in Noumea but also in the Loyalty Islands.

The authorities eased restrictions at the beginning of this week while rolling out a health pass now needed to go to restaurants and museums or for domestic air and ferry travel.

They urge the public to be vigilant and prudent, saying the next days will be critical for how the pandemic develops. Schools are being reopened today, with students obliged to wear masks.

There has been a rush to get the online version of the health pass, clogging and slowing the system producing it.

However, there have also been demonstrations across New Caledonia against the introduction of the health pass.

The gatherings, at time exceeding crowd size limits, were held outside the Congress and government building in Noumea as well as at the SLN nickel plant.

So far 53 percent of those over the age of 12 have been fully vaccinated or just under 46 percent of the total population.

Medical personnel as well as airport and port workers must get vaccinated by year's end or face a US$1,750 fine.