PET TALK: It’s all in the eyes 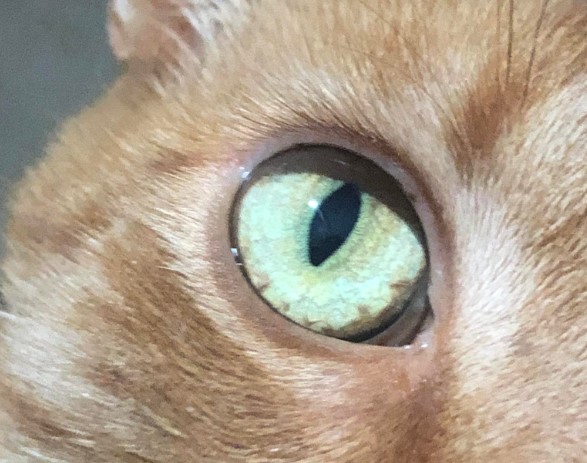 Bright, clear, liquid, dazzling, sad, doleful, crying, lying, beautiful. Eyes can be all of these things. Dogs are experts at puppy dog eyes. Cats are expert at death stares. Eyes tell us all sorts of things about their owners. But sometimes things go wrong. Dr Michael Baer explains.

Clara had one cloudy eye.  It was like looking at frosted glass.  It was also sore, judging from the way she kept blinking.  She squinted when she opened it.  She bit anyone who tried to touch it.  Clara had been like that for a couple of days, then we saw her.  We had to sedate her to have a look, but when we put a special dye in her eye, we could see a big section went green.  Clara had a corneal ulcer.  Hiding under her eyelid was the cause, a grass seed.  The seed had scratched the surface layers of her cornea off, and the cloudiness was her eyeball swelling in response.  We popped the seed out and a few days later the eyedrops had done their magic and Clara was clear eyed once again.

Boris couldn’t open his eyes.  They were glued shut.  By gross yellow goobies.  When his eyes did open the inside of his eyelids were bright red with lots of really big blood vessels.  And he was scratching at them.  A lot.  His owners thought it looked like he had pinkeye.  He did.  Conjunctivitis is the medical name.  It is an infection of the membrane which lines the inside of the eye.  It is very irritating.  Itchy.  And usually responds pretty quickly to drops.

Both Boris and Clara had weeping eyes, tears were running down their face.  Poko didn’t have that problem.  His eyes were slowly growing a brown scale over the surface.  His tears were like jelly, thick and sticky.  His eyes were slowly becoming like callouses, scarred to prevent more damage.  Dry-eye is common, a lack of tears results in damaged eyes, irritated and itchy.  And incurable.  A lifetime of drops and replacement tears are what is needed.  Poko went slowly blind.

Cassey had a lot of tears, running down her face.  Always.  She seemed to have sore eyes all the time, and although it looked like pinkeye, drops wouldn’t fix it.  Her eyelids were slightly wrong, she had eyelashes growing on the inside of her lid.  On the pink membrane.  And like a grain of sand in your eye, the hairs were irritating.  So annoying.  Drops could settle it temporarily, but Cassey was pretty miserable and only surgery could help.

These 3 dogs and 1 cat had some of the more common problems we see with eyes.  I am always amazed just how amazing eyes actually are. The tough white covering around most of the eye contains 2 specialised fluids, one in front of and 1 behind a lens that can deform and reshape itself as required.  The clear window at the front allows light in and an aperture regulates how much of the light gets carried behind the lens.  The specialized cells of the inner surface of the back of the eye collect the light and send the information through a nerve to the brain.  Now we have a picture of the world.  Well, a movie of the world.

Eyes are interesting and challenging.  And well worth looking after.