Global opposition for the rush to mine deep seabed is growing 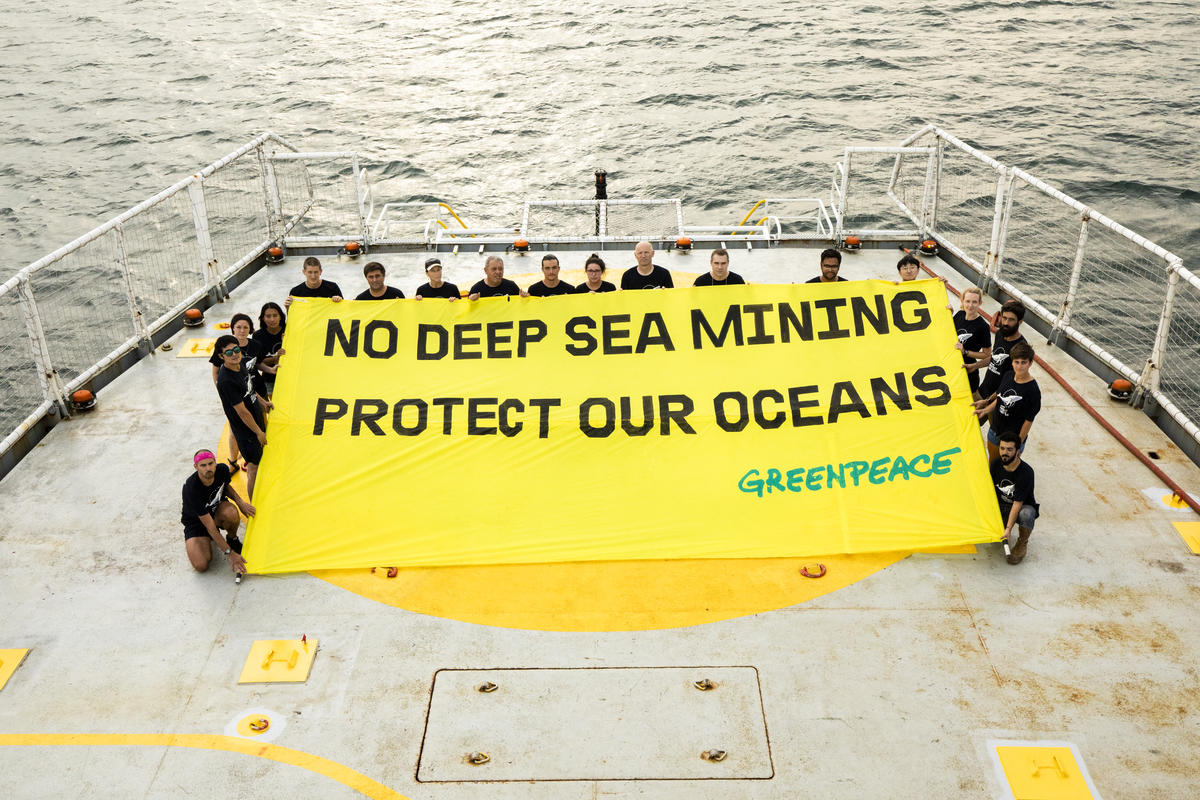 'No Deep Sea Mining' Banner on the Greenpeace ship the Esperanza, in Kingston, Jamaica.

Most of us have heard that Aotearoa New Zealand (NZ) has recently come out publicly in support of a conditional moratorium on deep sea mining (DSM) in international waters.

At the International Seabed Authority (ISA) negotiations currently in progress in Jamaica, New Zealand is saying that a conditional moratorium on deep-sea mining in international waters is necessary. This is to ensure the effective protection of the marine environment until strong environmental rules can be agreed and backed up by robust science. This announcement is very timely, as Nauru has triggered, in July last year, a loophole rule in the ISA agreement that will allow mining to start as early as 2024, just over 12 months from now. This can happen even if strong environmental rules to protect our marine environment are not agreed by then.

Not long after NZ made their announcement Germany also came out publicly in support of a precautionary pause (different words, but still essentially a moratorium) on deep sea mining. This is very significant, as Germany is the fourth biggest economy in the world. The German delegation to the ISA said it “wants to underline its view that the current knowledge and available science is insufficient to approve deep seabed mining until further notice”. They were joined by the representatives of Spain, Costa Rica, Panama and New Zealand who all made similar statements at the ISA meeting. Chile and Ecuador have also publicly called for a precautionary pause until sufficient science is available to make the decision to mine or not. While most of these countries have not stated a timeframe for the pause, Chile has suggested 15 years will be required

In addition, Fiji, Samoa, Federated States of Micronesia (FSM) and Palau have all called for a moratorium. This makes a total of 11 countries that have come out publicly calling for a pause on exploitation of the deep seabed for minerals. The French Polynesian Minister for Marine Resources has also been quoted as saying “Kiribati, Nauru and the Cook Islands are already engaged in an exploration process” and “we need to convince our cousins of the Pacific to stop this craziness”.

This is a rapid increase in the scale of opposition to deep sea mining. Six months ago there were no public statements from countries on the issue. There was however great support from 81 country governments and 577 non-government organisations at the International Union for Conservation of Nature (IUCN) World Conservation Congress held last year for a moratorium on deep sea mining. Based on this we expect the number of countries speaking publicly in support of a pause to continue to increase significantly in the near future.

The Cook Islands is represented this week at the ISA Council Meeting in Jamaica. We believe the Cook Islands should take this same precautionary stance for mining in International Waters at the ISA meeting this week, and speak out against the possibility of mining as early as 2024. This would demonstrate a genuine concern for the health of our marine environment.

We also believe this stance should extend to mining our own waters as well.  The NZ Government has said they respect the mana of each country to manage its own responsibilities to protect the ocean.  But, management of our own waters needs to be consistent with the international legal obligation that we have to protect and preserve our marine environment and its ecosystems.

For all of the deep sea ecosystems, it will take time to undertake the robust science needed to inform decisions on whether to mine or not to mine. It will take time to collect enough information to make an informed decision on whether mining is feasible without significant harm to the environment.

While we acknowledge that some science is being conducted here at the moment through the three exploration companies, we believe much more is needed, with an emphasis on biodiversity and environmental impacts. This needs to be led by independent research organisations, not deep sea mining companies. Until this information is available, a moratorium, or precautionary pause, should be put in place, if we are to maintain our international obligations.

If we rush ahead with mining in the next few years, before the science is available, we risk significant damage to our deep sea environment. We also risk our reputation as a clean green destination for tourists. Our Marae Moana Marine Park will not be worth the paper it is written on.

To finish, a thought provoking quote from the Chile delegation at the August 2022 ISA meeting: “Are we willing to be accomplices to the unknown and irreparable damages that deep sea mining might cause. On behalf of Chile, the answer is no,”

In breaking news, at the Climate Change COP 27 in Egypt this week, France has now also joined the call for a ban on Deep Seabed Mining. He sees this as an initiative to protect critical ecosystems for climate change resilience.