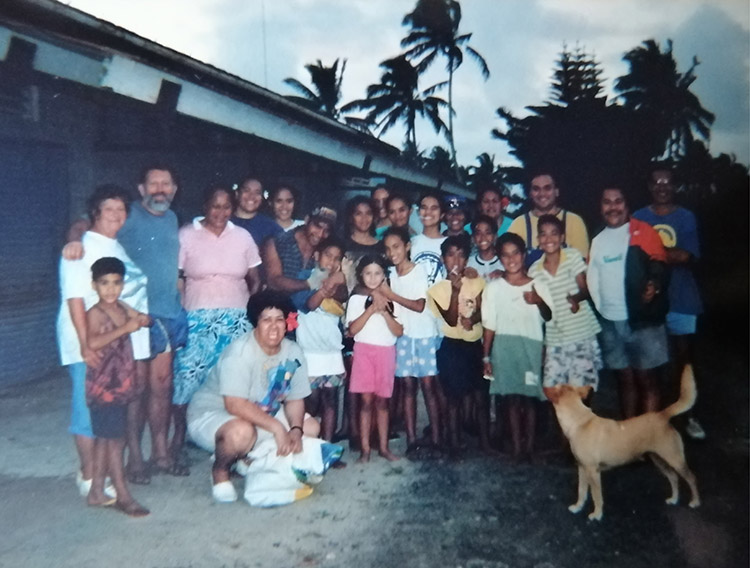 A 25th anniversary is known as a silver jubilee and this year sees Te Ipukarea Society (TIS) celebrating that significant milestone.

This was some pedigree of environmentalists, as can be seen by where many of them are today.  Jolene is still on the executive committee, Teariki is now chair of Korero o te Orau, Wayne is director at Climate Change Cook Islands, Ana is a global councillor for the International Union for Conservation of Nature (IUCN), and Jacqui has set up her own environmental foundation for the ocean, the Moana Foundation.

A scan of our very first newsletter in August 1996 shows that our core values have changed very little.

We were organising a Clean up the World Day, recycling, running membership drives, celebrating the Year of the Coral Reef, commenting on the Tourism Master Plan, discussing the trimming of ironwood trees in Kavera, and agricultural runoff and its impact on our lagoons.

It seems despite our very best efforts, our work is not yet done!

We asked some of the founding members to share their memories of what it was like starting up an environmental non-governmental organisation (NGO) from scratch.

Wayne King recalls having a discussion with Jolene in 1996 about setting up the NGO. The overall objective was to establish an environmental advocacy group which addressed a wide range of common interests. Jolene then set out getting the cogs moving with a group of about a dozen people soon joining in to make it happen.

Wayne says he is a bit hazy on how the name Taporoporoanga Ipukarea Society developed, but he does remember asking Teina Rongo to design the logo, which has been retained to this day. He also recalls that one of the big targets was how to engage locals in becoming members and getting involved.

Ana said: “I remember our first public meeting was held in the conference room of the old scholarship office behind the juicing factory in Takuvaine. As they say, the rest is history!”

“My association with TIS is one of the highlights of my career. I met and worked with many passionate people because of TIS. I won’t name them all as I am sure I will leave some out. From humble beginnings, here’s wishing TIS a happy 25th birthday, and many more”.

Jacqui Evans was working for the Environment Service when TIS was first established and also recalls the very first meeting.

“I remember some of the other founding members who have passed on, moved away, or gone on to other things. I think our first campaign was a partnership with uniformed organisations and the general community to pick up litter and sort out the recyclables.”

Jacqui recalls that TIS were the first to do a recycling campaign, several years before the government began to advocate recycling.

“We also did the first cloth shopping bag campaign, working in partnership with the Girl Guides, with the help of our late patron Dame Margaret Karika Ariki.

“Foodland, then owned by John and Linda Wichman, sold the bags in the front of the shop. The following year we coordinated the 1997 Pacific Year of the Coral Reef where we held an event in the front garden of the Banana Court (before the construction of the Blue Note Cafe, now Margueritas).”

Jacqui describes TIS back then as “just a group of people that cared and wanted to do extra for the environment in our own time. We were the only interest group with qualified marine biologists and environmental scientists at the time”.

“Since then, we've learnt an enormous amount about campaigning, organisational management, project proposals, funding and management, media, policy, and politics. Our executive did all of the work as volunteers in the first 10 years because we hadn't matured enough to begin projects that hired staff.

“Running an NGO is not easy and there were a number of others that tried to do what we did and started but then folded or became inactive. This is why I think that unless you're going to do something completely different, it's better to join an existing NGO and if you think there needs to be some change, change it from the inside.

One thing is for certain, says Jacqui: “Te Ipukarea Society's integrity will always be maintained.”

Another of the founding members of the society and current executive committee member, is Jolene Bosanquet. She reflects here on some of her memories of those early days.

“Awareness as to the appropriateness of certain development projects was growing in the Cook Islands and it was obvious to a number of Cook Islanders that there was a need for an environmental organisation to raise awareness and to protest against inappropriate developments.

“TIS is a member of Birdlife International, and the IUCN, which adds considerably to our credibility as a genuine and dedicated conservation organisation. For many TIS members, the most memorable campaign was ‘Save Our Suwarrow’ when we managed to protect for future generations the Bird Sanctuary of Suwarrow in the Northern Cook Islands, which was earmarked for fisheries and pearl farming development back in the late 1990s and early 2000s.

“Now some 25 years since inception, the Cook Islands can feel justifiably proud of the endeavours of Te Ipukarea Society through the commitment of a collection of caring Cook Islanders and through our benefactors – both private individuals as well as international environmental organisations.

Everyone is welcome to attend our 25th AGM which is being held at 4.30pm this Wednesday, June 9 at the Karika Palace in Avarua.