OPINION: Be an upstanding citizen, say no to bullying 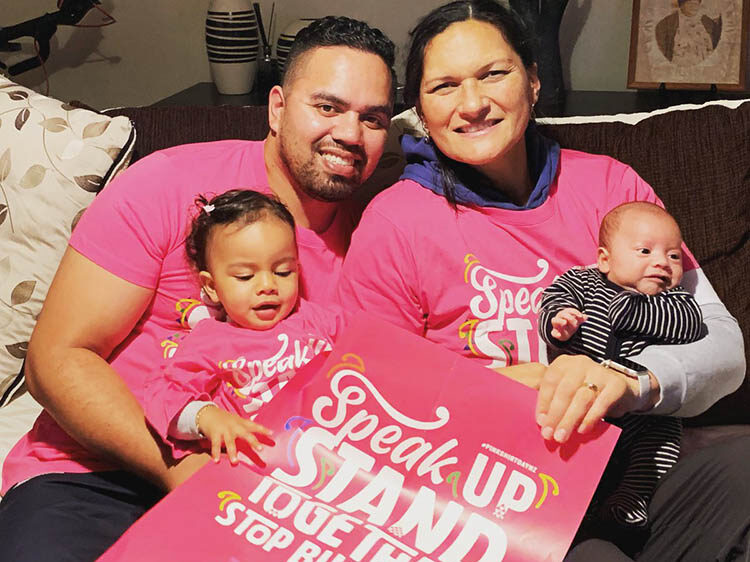 Kiwi athlete Dame Valerie Adams, who was bullied at school, with her husband and children promoting campaign against bullying. TWITTER/21053002

Those who say sticks and stones will break your bones, but names will never hurt you have never been held to ransom by a verbal bully, writes Ruta Tangiiau Mave, highlighting the ongoing discrimination faced by the LGBTQ+ community.

The largest muscle in Dame Valerie Adams body is her heart.

Her heart beats for her children, family, faith, sport, community, and people worldwide in large volumes of compassion and spirit.

She towers over you, but elevates you, she is humble yet she roars, she is Tongan which is not short for Rarotongan.

She stands for young and old, weak and bold; no one would know she was the subject of bullying at school because of her height.

Those who say sticks and stones will break your bones, but names will never hurt you have never been held to ransom by a verbal bully.

They have never had their name scrawled on the toilet wall in hate and lies, or received texts and emails in shouty CAPITALS making you feel shame and blame.

On Friday, May 21, New Zealanders took to wearing a ‘pink shirt’ as part of a movement to end bullying and celebrate diversity – it’s easy to wear a ‘pink shirt’ but what are we doing to combat the harsh culture we have of bullying here in the Cook Islands?

Bullying usually has a large crowd. The bully uses their actions on the victim to make themselves look bigger and better.

Studies have shown bullies are the ones with the smallest self-esteem and often from learnt behavior from being bullied themselves. It doesn’t excuse their behaviour but apart from the complexities of the offender there are the bystanders.

a) the Sidekick, who joins in on the bullying behaviour and makes it worse

b) the Reinforcer, who eggs on the bullying by watching it or laughing at it

c) the Outsider, who ignores the bullying, but doesn’t do anything to stop it.

They are equally as bad as the bully. In order to create change we have to move from being bystanders to being upstanders.

An upstander is a supportive bystander who uses words/actions that can help someone who is being bullied.

Research shows that when someone steps in and stands up to bullying behaviour, it’s likely to stop right away. Simply telling someone to stop ‘picking on another’ or ‘leave them alone’ can work.

Bullying is seen on the playground, in the office, at the worksite sure, but it is often the seed that fuels the actions of domestic violence.

Physical hurts are often easily able to be documented, mental, emotional abuse is harder to identify and record.

Bullying can cause feelings of confusion, rejection, stress, fear, shame or embarrassment. Bullying can even cause anxiety, depression or physical illness.

Teenage suicides and school massacres have been traced back to bullying. The husband who uses money or demeaning words as weapons instead of his fists to enforce his preferred set of behaviours is a bully.

We often use language that creates superiority and effectively bullies.

The expression an ‘expat’ short for expatriate is by definition a legally working individual who resides temporarily in a country of which they are not a citizen.

The phrase, however, is loaded with many preconceptions and assumptions about class, education and privilege – just as the terms foreign, immigrant or migrant worker call to mind a different set of assumptions.

An ‘expat’ often describes those who are educated, rich professionals, while those in lesser positions like a housekeeper, gardener are deemed migrant workers. Language matters because it can be used as a political tool – Trump in closing borders, UK in Brexit, or to dehumanise.

May 17 was International Day against Homophobia, Transphobia and Biphobia, the rainbow flag used to recognise the different spectrum of diversity in our communities flew alongside the New Zealand and the Australian flags while the Cook Islands flag flew alone, another reminder of the determined path of our Government to overlook the conventions of global humanity and our very own Constitution’s Article 64 holds there should be no discrimination against individuals for reasons of sex.

Yet the select committee is pushing to overturn the 2017 decriminalisation of such.

Conveniently, the committee and churches quote God’s Law as reasons for why they feel LBGT individuals are potential criminals, but there is no mention of it in the original Ten Commandments.

However, coming in at number six “Thou shalt not commit adultery” and number seven “Thou shall not steal” are ignored by influential people in our own country who have broken God’s divine laws six and seven with some who have and continue to do both, with no reprimand, no accountability and no public unveiling.

By turning our back on these transgressions while bullying others to toe the line of an inaccurate ‘normalcy’ with laws, restrictions and threats only highlights the black seam of endemic bullying problems running through the veins of our society under our starch white rito hats.

Be an upstanding citizen and say no to bullying.