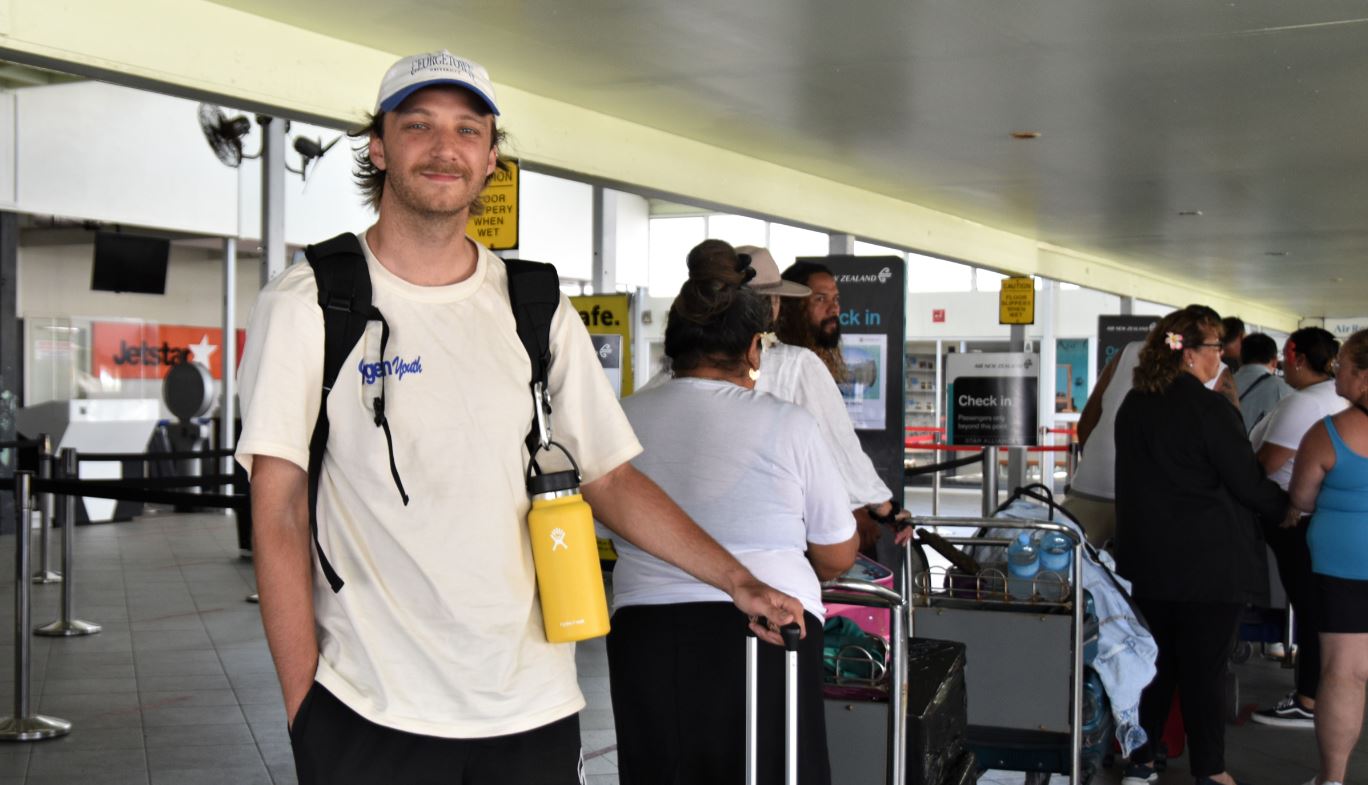 Zac Harris at Rarotonga International Airport for the second time in two days after having his Jetstar flight delayed for over 15 hours. - 22101801 or 22101802

A man who was meant to catch a Jetstar flight from Rarotonga to Auckland on Monday was asked if he could stay with friends, and then paid for his own taxi when his flight was delayed by more than 15 hours.

Zac Harris was meant to depart Rarotonga at 8.30pm Monday but found out as he checked in, that the flight would not depart until Tuesday at 1.45pm.

Harris said he heard rumours in the check-in queue on Monday that the flight was delayed, which was confirmed by the front desk.

“They were definitely trying to push me to stay with friends instead of ending up in the resort.”

Harris tried to get on a bus, chartered by Jetstar to transport offloaded passengers to a resort, and asked if he could be dropped at his friend’s place.

He was told he needed to find other form of transport if he wasn’t staying at the resort.

“It was a little bit frustrating how Jetstar wasn’t that helpful with getting me home,” he said.

Harris paid for a taxi, but later found out through the Jetstar website he could be reimbursed if he kept the receipt, which Harris said he did not keep.

Harris said he was not too frustrated by the delay because he knew he had a place to stay.

However, he said some people had connecting flights, which included a man who was going to Australia on a work trip.

“He was very frustrated,” Harris said.

A Jetstar spokesperson apologised to the impacted customers.

They said the return flight between Rarotonga and Auckland was “severely delayed” as a result of extreme weather impacting the route.

“All passengers away from home were offered help to cover accommodation expenses and other reasonable expenses, including transport to and from the airport.

“Customers who no longer wished to travel could opt for a refund or travel voucher.”

“While we do everything we can to avoid delays and cancellations, the safety of our passengers and our crew is always our first priority,” the spokesperson said.

A consumer's rights organisation has recently complained to the New Zealand Commerce Commission alleging Jetstar is misleading passengers about their rights and breaching the Fair Trading Act which has been firmly rejected by airline.

Consumer New Zealand said Jetstar customers could be missing out on costs they are legally entitled to for things like accommodation, rental car hire, or a flight on another airline.

“When flights are delayed or cancelled for reasons within an airline's control - which might be due to overbooking, mechanical issues, staff sickness - the airline has a responsibility to refund your flight and reimburse costs incurred from the cancellation or delay,” Consumer NZ chief executive Jon Duffy said.

“This could be for things like accommodation, rental car hire and other additional costs.”

He said Consumer NZ continued to receive large numbers of complaints from Jetstar customers about information provided to them when flights are cancelled or delayed for reasons within the airline's control.

“It is hugely concerning to us that passengers could be missing out on costs that they are legally entitled to and are having to go to great lengths to enforce their rights.”