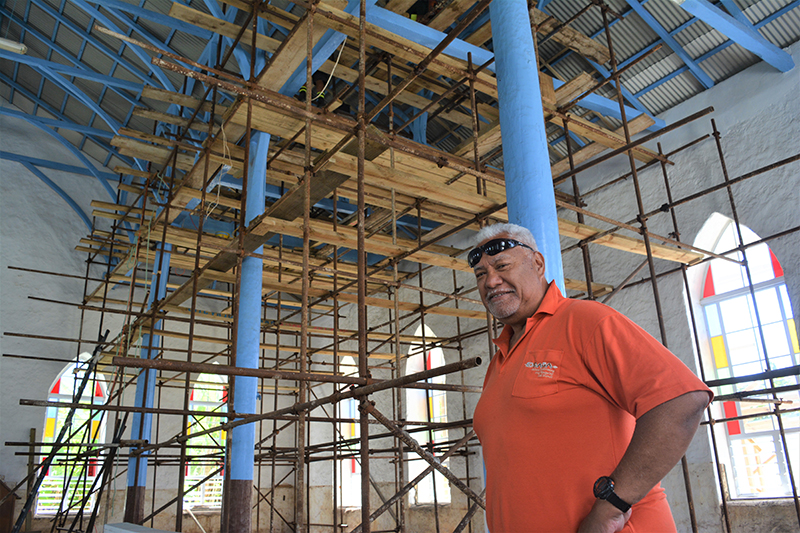 Titikaveka Cook Islands Christian Church Deacon Sonny Williams has been appointed as the project co-ordinator of the $200,000 renovation. 22101721 or 22101722

A $200,000 renovation is underway at one of the oldest churches in the Cook Islands and is set to be completed in time for next year’s bi-centennial celebrations in Rarotonga.

Titikaveka Cook Islands Christian Church (CICC) named Betela, or Bethal in English, was built in 1841 and is undergoing renovations.

It follows a string of previous renovations since its construction, which included work to the roof and floor.

Church Deacon, Sonny Williams, who has been appointed as the project co-ordinator to watch over the work, said “it was time”.

“A lot of beams have rotted, especially the parts that have sunken into the wall,” Williams said.

“The exposed parts are pretty much ok, it’s the parts that are holding it in the wall that are rotted. Maybe moisture has seeped through the wall over nearly 200 years and of course that has caused rot in the beams.”

Williams said a layer of wood was also going to be placed under the corrugated iron roof to reduce the noise on rainy days and a new fan and light system would be put in.

Williams said he hoped for it to be completed in March or April, but definitely before July 2023, when the bi-centennial arrival of Christianity will be celebrated in Rarotonga.

“This will be the last major renovation for when this church celebrates its 200 years’ birthday in 2041, so when that time comes around, it should basically be a paint job or clean up job.”

Williams said the renovations started earlier in the year but construction workers took a break to help fix The Rarotongan Resort after waves hit the island’s south side in July. He also said there were delays in getting materials.

He said CICC were paying for part of the renovations.

Williams thanked the families who had donated to the project. He asked for anyone wanting to get involved in the project to call him.

The congregation is meeting at the Titikaveka Sunday School Hall opposite the church while the renovations are taking place.