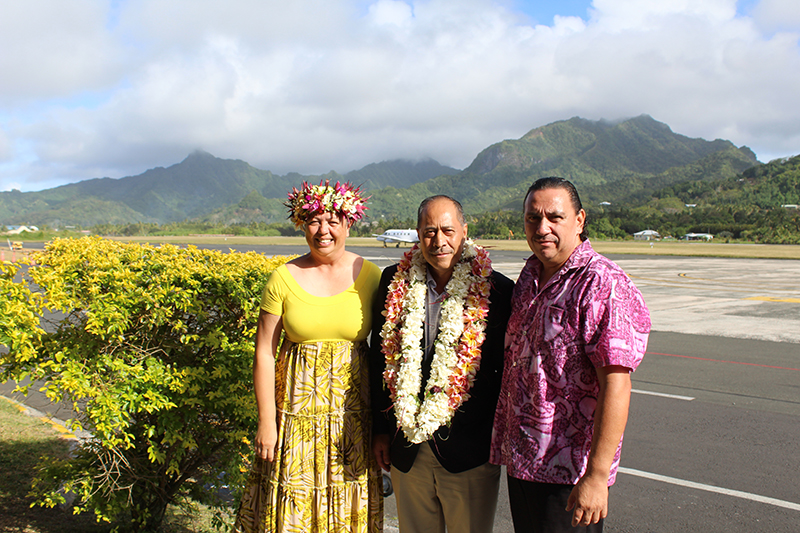 Niue Premier Dalton Tagelagi arrived in Rarotonga yesterday afternoon, in transit on his way to the 5th Korea-Pacific Islands Foreign Ministers meeting to be held in Busan, South Korea next week.

Tagelagi arrived in Rarotonga on an Air Rarotonga charter flight, and was met on arrival by Deputy Prime Minister Robert Tapaitau, and Special Envoy to the Pacific Islands Forum and Secretary of the Ministry of Foreign Affairs and Immigration (MFAI) Tepaeru Herrmann.

Bilateral discussions held in the VIP lounge on the Premier’s arrival covered flights connectivity, economic recovery, pandemic response and recovery, and the recent announcement by the United States of America towards recognition of both Cook Islands and Niue sovereignty.

Talks also extended to regional initiatives, including the Cook Islands assumption of the Pacific Islands Forum Leaders (PIFL) chair responsibilities and hosting of the PIFL meeting by the Cook Islands in 2023.

“This was a welcome opportunity to catch up with Premier Tagelagi on bilateral and regional matters,” said Special Envoy Herrmann.

In addition to membership of the PIFL, the Cook Islands and Niue are part of the realm of New Zealand and members of the Polynesian Leaders Group.