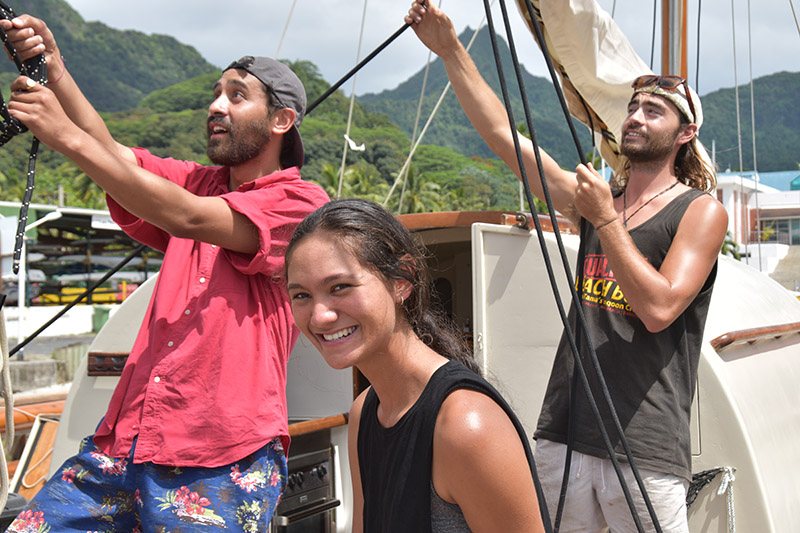 Mahonri Williams (left), Charlene Akaruru and Oliver Oolders are part of the crew set to depart to Aitutaki this morning. AL WILLIAMS/21102014

GPS and modern navigation will be switched off for the overnight trip to Aitutaki on Vaka Marumaru Atua. Instead, the crew will be using traditional wayfinding techniques guided by stars, wind, swell, and the sun.

“So this is our opportunity to show what we’ve learnt and it’s the easiest run because it (Aitutaki) is straight North and it’s only 145 miles,” Wong said.

“It’s our turn to put that in the water.”

He said only the radio will be on during the sail.

“So no GPS, no compass, just full-on traditional navigation.”

Marumaru Atua will depart Avarua harbour at nine this morning and is expected to arrive at Aitutaki at around midday Friday.

The vaka and crew will stay for a week for the 200-year anniversary celebrations of the arrival of Christianity to the island. Conditions permitting, the crew will return on Thursday next week also using traditional navigating.

“We’re only just scratching the surface (of navigating) ... people take lots and lots of years to be able to get to that level where you take the (navigation) test, so this is just the start of it,” Wong said.

He said the group would do many trips from Rarotonga to Aitutaki until they sailed further to Penrhyn, which is another 700 miles on.

Charlene Akaruru is in her final year of secondary school and this is her first voyage to another island, she said only using traditional navigation was awesome.

“It really is something that gets you thinking a lot, it’s just overall amazing.”

She said the classroom sessions were confusing at first because of how much there was to think about.

Physics were also part of lessons, where crew needed to learn about degrees and stars rising and setting, Akaruru said.