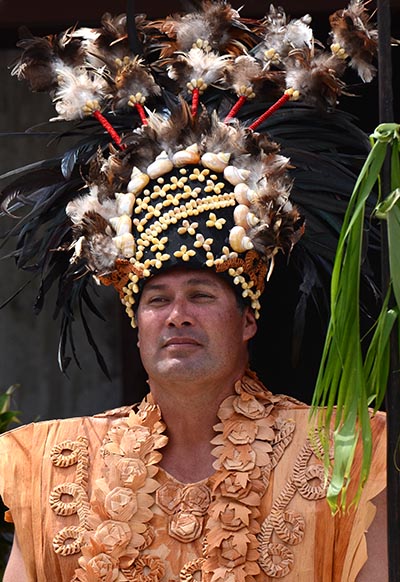 Hundreds gathered to witness the installation of Makea Vakatini Phillip Ngamatoa Ariki on Friday. Although the ceremony was met with a vocal protest who called the election process a “fraud”, it continued largely as planned.

Hundreds turned out to witness the historic akamarokura’anga of Makea Vakatini Phillip Ngamatoa Ariki, when he was adorned and crowned with traditional attire at the Taurangamanu Vakatini Palace grounds yesterday morning.

Four of the tribes’ five rangatiras presented and dressed the Ariki on the Marae Maraerenga O Vakatini with traditional dress that was created by the people of Atiu.

Makea Vakatini Phillip Ngamatoa Ariki bit the ear of a pig and was annointed at the burial of his late father Makea Vakatini Joseph Tepo Ariki on July 20, 2020.

The proceedings began with a vocal protest by Te Ora Rangatira line of Makea Vakatini started before the official proceedings. The protestors described the election process as a “fraud”.

The unexpected strong vocal “patoi” (protest) chanted from two tribesmen of Te Ora Rangatira line at the akamarokura’anga of Makea Vakatini Phillip Ngamatoa Ariki was said to have startled guests at the well-attended ceremony.

The objectors had gathered on the main road to publicly voice their disapproval at the proceedings of the election of Makea Vakatini Ariki.

The Makea Vakatini Phillip Ngamatoa Ariki tribe responded to the “patoi” with a commanding chant from Taoro Brown that continued to lead in their Rangatira’s, including Te Ara Rangatira Prime Minister Mark Brown, to the Marae Maraerenga O Vakatini at the Taurangamanu Palace grounds. Proceedings of the historic occasion continued with the adornment of “kakau tapa” – traditionally made garments – and the crowning of the Ariki.

Hundreds including Sir Tom and Lady Tuaine Marsters, former prime minister Henry Puna and his wife Akaiti, Mayor of Aitutaki Tekura Po'o Bishop and a special delegation from the island were present to witness the grand event. “The Kopu ariki of Vakatini were never called, our protest is that the procedure of electing Phillip to hold the title was not done the way it should have been, its fraud,” Maurangi said.

“When his older brother declined the title, the decision should have come back to the Kopu Ariki to decide and have an election.

“What is ours has been sitting there, we have been serving and serving for too many years; it’s about time we come to the fore and claim it.

“That’s why we are here standing, it’s our right to stand here to object.”

Yitiri Akama also from the opposing line Te Ora says, “we wanted to voice our objection about the way the election was held, that’s our main concern.

“It is also customary for us if we don’t agree to protest, we have to do it, it’s part of our culture, it always happened.” Earlier in the morning a private family unveiling ceremony was held for the late Makea Vakatini Joe Tepo Ariki.