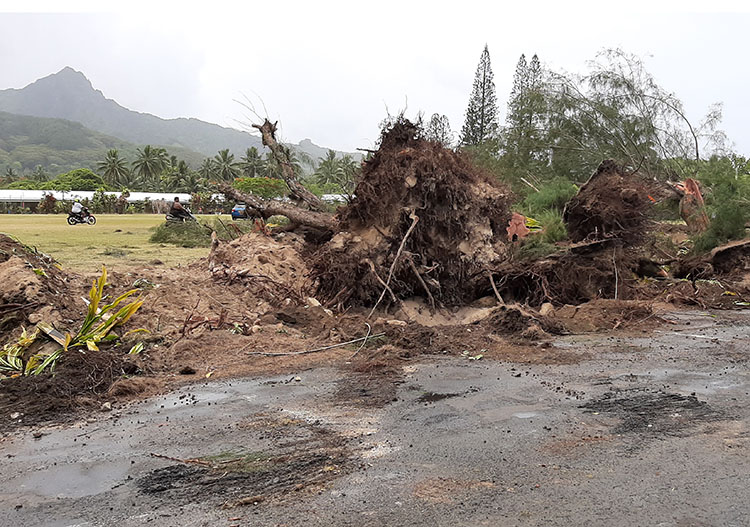 Rain fell on Tuesday afternoon as the last of the beloved Matavera toa (ironwood) trees were felled, allowing government workers to proceed with roadworks in the area.

The magnificent historical toa (ironwood) trees in Matavera are no more.

Chainsaws, diggers and trucks scattered across the school field yesterday signalled the doom, destruction and the beginning of the end of the loved toa trees.

The trees were planted by hand, digging into corralled rock and sand in the early 1960s by Matavera School students, teachers and the community.

Truckloads and truckloads of the strong toa branches and mulch were hurriedly taken away to homes in the village.

Member of Parliament for Matavera Vaitoti Tupa said the people in the village were welcome to help themselves to the mulch and timber of the toa trees.

However, some village residents were disappointed they were not informed that they were permitted to take away branches and mulch to their homes for their gardens.

For nearly 60 years the trees had served as shade for children, sports teams, families and pedestrians and had remained standing after cyclones and severe storms, serving as a wind protector for the schools and homes.

A public meeting to discuss the impact of roadworks on the fate of the trees was called by Infrastructure Cook Islands (ICI) in August last year.

The majority wanted the trees to be kept and for government to look into a proposal put forward by Des Eggleton that would save most of the trees. ICI director of planning and projects Sonny Williams had informed the meeting (in August 2020) that landowners on the seaside of the school strip were approached to allow more of their land to be used to widen the road, but they had refused.

In December 2020 ICI updated a Matavera public meeting and notified the attendees that the trees would be entirely removed.

The tree removals for the main road upgrade of Takitumu Primary School started on Monday.

A concerned grandparent, whose children attend Takitumu primary was devastated at governments decision to disregard the historical and environmental value of the trees - that he called “sheer vandalism, and recklessly destroying historical nature”.

In salutation to the Matavera toa trees, he wrote the following eulogy:

“Kia Orana tatou, sadly most of us have recently been attending funerals of friends, relatives and loved ones, and have listened to many eulogies telling stories of past performances and achievements. We have nodded, laughed and cried.

“But today I want to write a special eulogy for another sad occasion. One not about people, but rather about part of our island history. Yes, those magnificent toa trees at Takitumu School, planted with much love so many years ago, with a view to serving their community for generations and indeed they have served very well, and would have continued to serve for many years to come.

“Men armed with machinery, diggers, chainsaws and trucks swiftly and literally cut down in their prime of life, still young at about 60 years, and with many generations still to thrive, with so much more to give and to offer. They were icons of their village.

“And a place of solace and comfort to all who sat and played underneath, or just went slowly by, giving shade and comfort to thousands of school kids over the years as well as thousands of sports men and women, boys and girls who took their breaks from sporting activities to recover in the shade of those magnificent trees. “But sadly the vote went against them, and it was deemed that they were in the path of progress and development…and they were mercilessly removed, deemed by the Authorities to be a hindrance to safety.

“Perhaps progress is not always what it should be.