A ‘happy virus’ goes out to the world

Saturday 29 May 2021 | Written by Al Williams | Published in Local, National 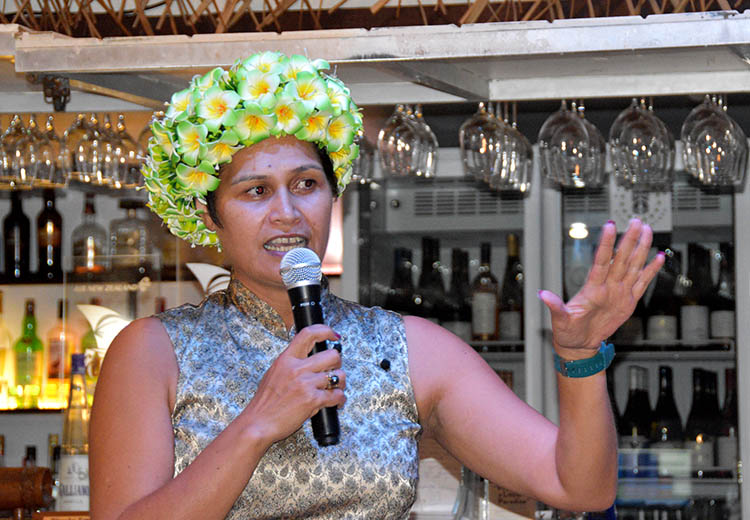 Podcaster Chantal Napa, the voice behind the Kia Orana Podcast, celebrates 12 months and more than 50 episodes at On the Beach Bar and Restaurant on Thursday evening. 21052811

A Cook Islands podcaster has celebrated a milestone in connecting the nation to more than 60 countries.

Tourism operator Chantal Napa has spent the past 12 months building an international audience after travel bans forced her to look at other options.

Napa, with the help of her United States business partner Haydn Adams, has set about taking the Cook Islands to the world through the Kia Orana Podcast.

“We are now reaching 64 countries around the world, we are a happy virus going out to the world,” Napa told a crowd of about 30 people gathered at On the Beach Bar and Restaurant on Thursday evening.

“There are still people on my list to interview,” she said. “I get a new country and three new cities each week.”

A pre-recorded speech by Adams was played to the gathering. “I never imagined starting a podcast on an island I didn’t know anything about.

“I’m humbled; it is a podcast that has shown no boundaries,” he said.

In each episode the pair work to inform and enlighten listeners, through interviews and lighter moments, on life in the Cook Islands.

Their interview subjects have included artists, entertainers and politicians, including Prime Minister Mark Brown, among others.

Several of them were at the Thursday event to celebrate with Napa and spoke in support of the venture.

Prime Minister Mark Brown said the event was an acknowledgement of a young Cook Islander who had created a product.

“I take my hat off to her; she has a business that has used technology, it utilises technology, and her customer base is international.

“It puts Cook Islands out there to the international market and it’s attracting a discerning crowd,” he said.

“This is the sort of innovation we need to have, particularly during Covid-19; she has come up with this in the toughest of times.