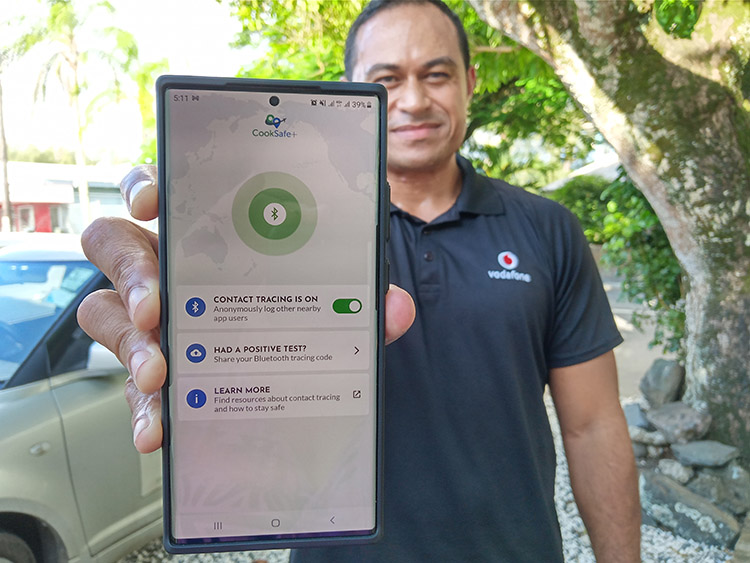 The Cook Islands Chamber of Commerce, which has led the development of the country’s two main contact tracing systems, says downloads of the contact tracing smartphone app are increasing along with the number of registered CookSafe QR cardholders.

According to data released by Te Marae Ora Ministry of Health (TMO), a total of 6724 smartphone users installed the CookSafe+ Bluetooth app installed on their phones as of July 4, up from 6096 the week before.

TMO also reported there were 1308 new registrations for CookSafe QR cards, up from 1042 over the same period.

The total number of QR card registrations now sits at 18,569 – although that number includes cards from roughly several thousand visitors who have since returned to New Zealand and are no longer in use.

Approximately 12,500 tag-ins are being made per week, which the Chamber says is comparable to the number of scans being made in NZ each week. Among those that have downloaded the app, statistics show only 40 per cent have the Bluetooth functionality activated all the time. The figure is slightly less than usage of the NZ Covid Tracer app, which is roughly 50 per cent according to data provided by New Zealand’s Ministry of Health.

“Overall, we are very pleased with these current usage numbers for both CookSafe and CookSafe+,” said Chamber chief executive Eve Hayden.

“We have full confidence in the system and the CookSafe+ app is seen as an excellent complement to CookSafe, to cover both people and places.

“However, we would like to remind everyone who has downloaded the app that to properly activate it they should also make sure they have their Bluetooth and location services turned on at all times.”

Hayden said statistics can also be affected by other factors, such as users who turn their phones off overnight, as well as visitors and residents who have left the Cook Islands but kept the app on their phone.

Eve Hayden said: “We do know that prior to the travel bubble around 40 per cent of local smartphones had downloaded the app and the important aspect we keep an eye on is the continued growth, as more and more visitors download the app.

“In general, the opening of the travel bubble also heightened local awareness of the importance of the ability to contact trace as well.”

According to a report in MIT Technology Review, many public health authorities have made it a goal to have 60 per cent of their populations using contract tracing apps.

While few are reporting that level of usage, an Oxford University study found that tracing apps at usage levels as low as 14 per cent can help protect the public from transmission of Covid-19.

A 56 per cent usage rate and a reduction in infectious contacts by 20 per cent considerably slows down the epidemic, the report says.

Hayden said the Chamber is continuing to promote usage of both tracing systems to residents and visitors through a range of mediums, including social media, television, and radio.

“CookSafe and CookSafe+ are being promoted both in the Cook Islands and New Zealand through official channels, as well as on inbound Air New Zealand flights through onboard announcements read out to passengers by the Inflight Manager and staff,” she said.

“The presence of Chamber’s CookSafe staff at major events, gatherings and social centres has also helped reinforce the importance of using CookSafe and CookSafe+.”