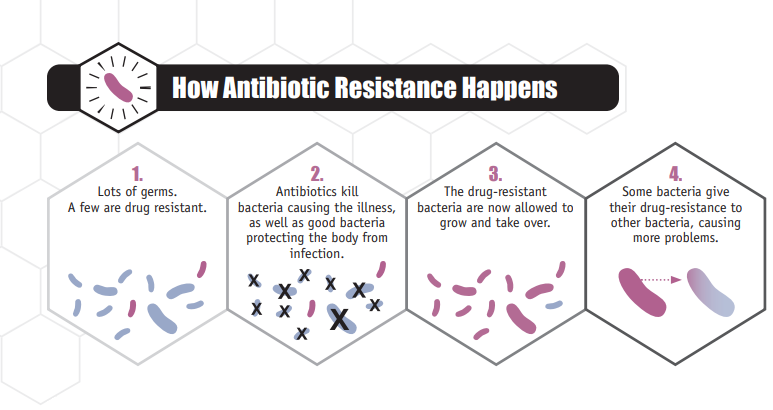 From: Antibiotic Resistance Threats in the United States, 2013. Centres for Disease Control and Prevention, U.S. Department of Health and Human Services, www.cdc.gov/drugresistance/threat-report-2013/pdf/ar-threats-2013-508.pdf/22111835

In October, when Te Marae Ora (TMO) Pharmacy Staff surveyed 434 people on what they knew about antibiotics, they found that a lot of people thought that antibiotics are used to treat infections caused by bacteria, or viruses, or fungi, and nearly half the people surveyed thought antibiotics helped to treat the common cold.

But antibiotics only treat infections caused by bacteria, like wound infections or pneumonia.

Andrew Orange, TMO chief pharmacist, said: “Antibiotics don’t work for infections caused by viruses, like the common cold, influenza, or Covid. They also don’t work for fungal infections like white spots and ringworm.  They won’t make you get better any faster from these conditions.”

Using antibiotics to treat infections caused by viruses could damage good bacteria that help to defend us against infections, says Orange.  “If the good bacteria are damaged, the bad bacteria could get out of control, causing problems like long-lasting diarrhoea.”

“We need to use antibiotics wisely to keep them working. We need to make sure we don’t take antibiotics for the common cold or other viral infections that will probably get better by themselves with rest, fluids, and healthy food.  Your doctor or nurse practitioner is the best person to decide what is causing your infection (bacteria or virus) and if antibiotics are needed. It’s always best to check with them.”