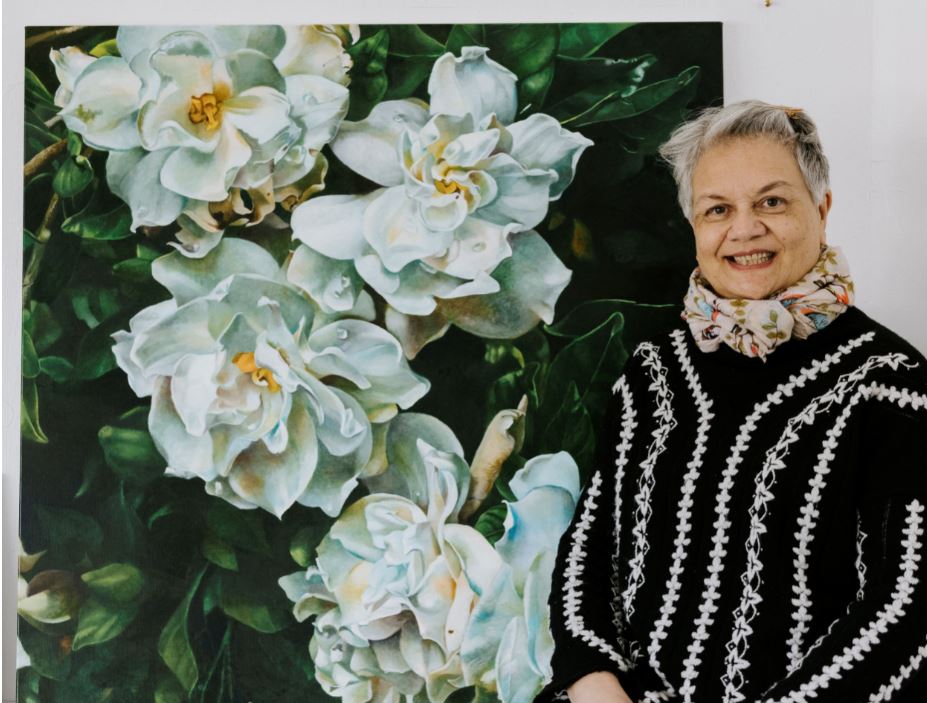 When the Aotearoa Art Fair opens in Tāmaki Makaurau Auckland on Wednesday, November 16, it will be a celebration of Cook Islands Va‘ine for Bergman Gallery. By Rachel Smith.

Artists Tungane Broadbent, Mahiriki Tangaroa, Sylvia Marsters and Nina Oberg Humphries all feature at the art fair this year, the fifth that Bergman Gallery has been selected to participate in.

For Tangaroa and Marsters the timing is significant, coinciding with their solo shows on opposite sides of the world – Tangaroa in Venice and Marsters in Auckland.

“The work is based on the ocean, looking at traditional culture, the links that we had with neighbouring islands, the shared linguistics, art objects, and systems that were in place at the time,” says Tangaroa. “The exhibition in Venice has impacted greatly, in terms of opportunities, and it’s been somewhat of an incentive, being approached by international institutions to purchase and acquire work.”

“Having a solo exhibition in Auckland after a long hiatus (2007) made me realise the significance of my time in the Cook Islands; it’s almost 20 years since I first set foot on Rarotonga,” says Marsters.

“I began painting figures when invited to participate in Sunday Girl, an exhibition for women artists. It gave me freedom to explore and step outside of my gallery representation. Working on this solo exhibition in Auckland, the figures naturally began appearing, at first emerging through the foliage and then two small paintings completely dedicated to this new narrative.”

Tangaroa and Marsters will present new work at the art fair, as will Tivaivai artist, Broadbent, who is teamed with senior Aotearoa artist Reuben Paterson. It is the second time the artists have shown work together, the first in the 2017 show, Today, Tomorrow & Yesterday,at Bergman Gallery in Rarotonga. Paterson will again respond to Broadbent’s Tivaivai, which will include Manu (two tone), Tataura (embroidery) with a series of his glitter works.

“They are radically different mediums,” says Ben Bergman, director of Bergman Gallery. “It’s the conceptual elements that bind them – the themes they articulate are similar.”

On debut with Bergman Gallery at the art fair, Oberg Humphries’ staff god sculptures were part of the opening group show at Bergman Gallery Tāmaki Makaurau Auckland, earlier in the year.

Developed during her 2020 Pacific Artist in Residence at the University of Canterbury’s Macmillan Brown Centre for Pacific Studies, each staff god sculpture consists of a “stick” at its centre, topped with a “found” Tangaroa, and wrapped in layers of material Pacific culture such as plastic woven mat, tapa, fake fruit and plastic bags.

Her work at the art fair will include one of her staff gods, alongside a new series of her intricate “moulded” sculptures.

Following the art fair, Oberg Humphries has a solo show at Bergman Gallery Rarotonga in June 2023.