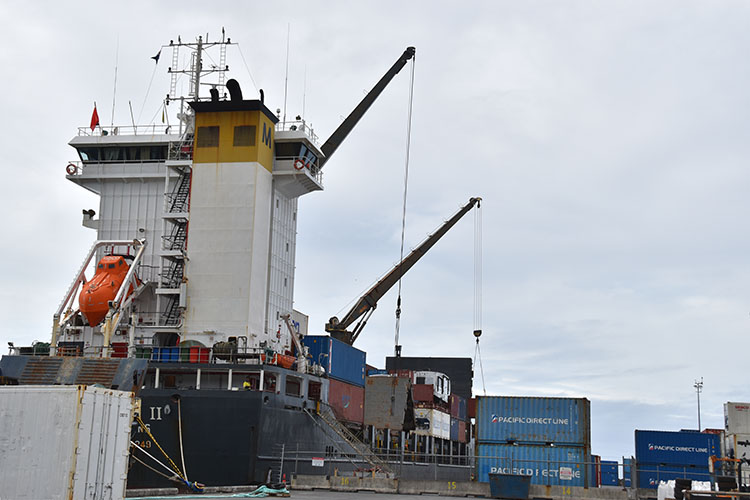 The Cook Islands Chamber of Commerce says government economic figures for the coming year may be optimistic. Pictured here is the cargo vessel Liloa II. 21030909

The Chamber of Commerce reacted to yesterday’s unveiling of the budget with a warning that businesses could be forced to lay off workers in the absence of government financial support for vulnerable companies.

In announcing government’s spending plans for the 2021-22 fiscal year, Prime Minister Mark Brown confirmed Government will be ending the wage subsidy and the bulk of measures that were included in the Covid-19 Economic Response Plan.

In its place, it has set aside $22.5 million to assist businesses in the event of a border closure or renewed economic hardship.

Eve Hayden, the Chamber’s chief executive officer, said many local businesses continue to suffer, despite the opening of the travel bubble with New Zealand last month.

“… we remain concerned about the wage subsidy concluding at the end of this month, at a time where many businesses remain 50 per cent or more behind in revenue when compared with the corresponding pre-Covid period,” Hayden said.

“Even in July with seven (initial) flights compared with 23 pre-Covid, there simply won’t be the trading revenue needed to keep existing staff employed.

“Shedding staff now when some recovery is underway will be a difficult call, but many businesses will need to do this if the wage subsidy finishes.”

Hayden said the Chamber is seeking a continuation of the wage subsidy for businesses that can demonstrate a 50 per cent or more reduction in revenue when compared to similar pre-Covid months.

Additionally, she said the Chamber had more conservative revenue estimates for the 2021-22 fiscal year, compared to the figures presented by PM Brown on Tuesday.

During his address to Parliament, Brown, who is also the Minister of Finance, said Government is estimating gross domestic product to grow by 8.8 per cent in the coming 12 months. Taxation revenues are also expected to grow to $107 million – a 32 per cent increase from the previous year.

Hayden said: “If flights from NZ increase towards pre-Covid numbers, and if we open a bubble with Australia, that will clearly change the landscape and increase revenue.”

“Yield per visitor may also take a while to realign with pre-Covid numbers as deposits on accommodation have already been paid in many cases and therefore ‘new’ revenue may only be 70-80 per cent of the spend.”

Parliament was adjourned yesterday, and the Appropriation Bill referred to the Public Accounts Committee, which is a change of process from previous years.

“It should also mean that the general public will be able to ask questions,” he said. “They want it to be a robust process.”