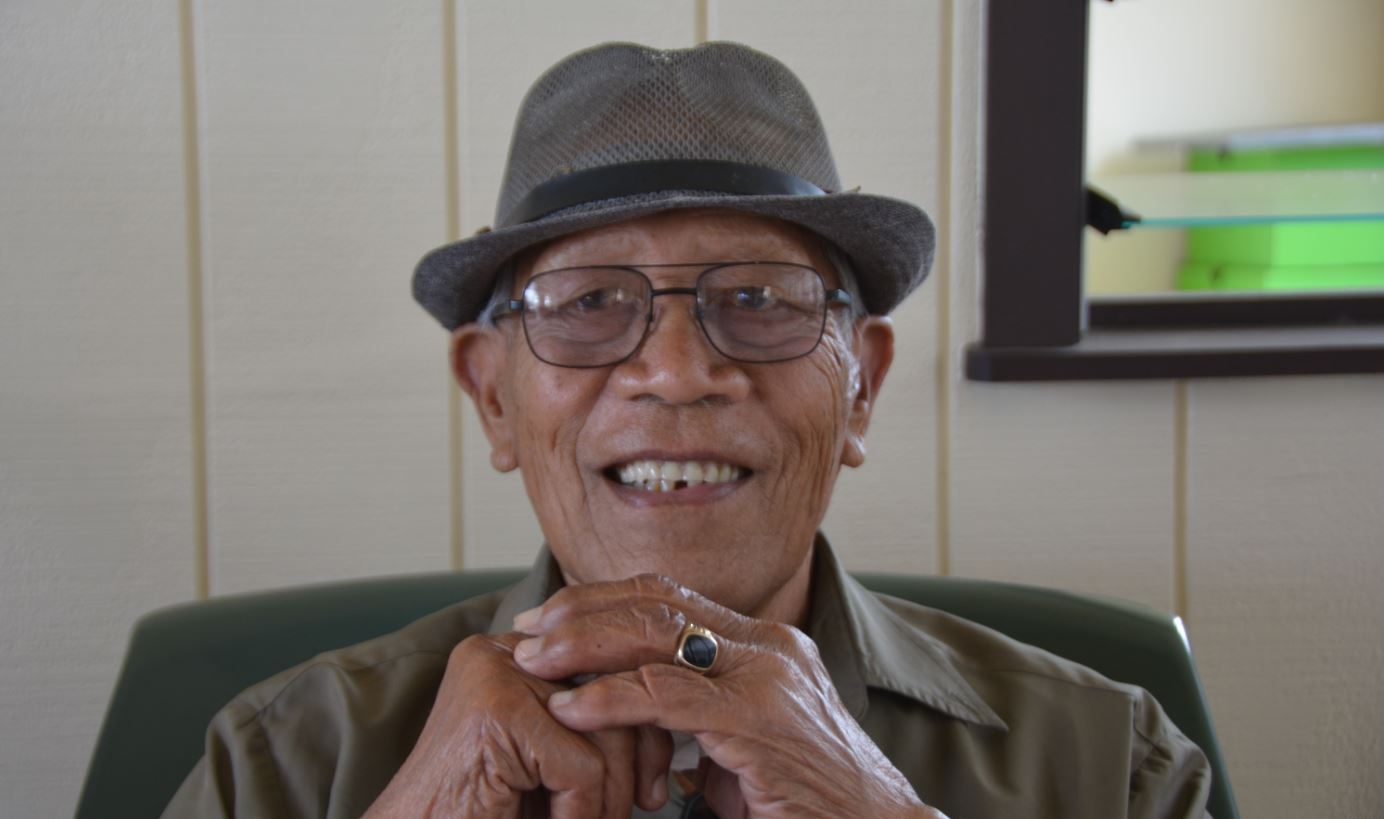 Rongo Ezekiela attends the Are Pa Metua group each week. 22102826

At the age of 91, Rongo Ezekiela is trim, energetic and agile, and continues to watch his food intake and mobility routine. He shares his healthy lifestyle journey, and his work experiences with Government in the 1950s taking care of the transmitter masts and stations, with senior journalist Melina Etches.

Rongo Ezekiela has a happy outlook on life and proudly says he does not suffer from medical conditions like Non-Communicable Diseases (NCDs). However the only thing he finds difficulty with is sleeping “which comes with aging”.

“I don’t drink beer, I never did, and I think beer is very damaging, I know it’s not good for the body and I don’t want to do that,” says Ezekiela.

“I work, I like working in my garden, to keep moving, and I don’t really eat too much because I try to keep my weight down to avoid putting stress on my knees.”

Some years ago he fell off a ladder, damaging ligaments, while pain in his knee is caused by years of using it to brace himself when planting taro.

“I know that my body carrying heavy weight is not good for my knees, so I adjusted my food and I knocked my weight down from 75 kilograms to 60 kg to help my knee problems.”

Admittedly, he says most of his life he didn’t drink a lot of water daily, this changed when he was taken to the hospital and was told he was dehydrated.

“I didn’t have enough water in my body because when I work, I forget about eating and drinking water.

“I still like to do my lawns, and for a long time I haven’t been sick, I never had the flu but now and then I get a minor headache but I fix it myself.”

His mother Tangata, from Aitutaki, passed away when he was very young.

“I don’t really remember her, I was about two-years old when she died.”

His father Ezekiela Tamuera from the Makirau line in Arorangi, died three years after his mother.

He spoke fondly of his eldest brother Tukua who helped to take care of their siblings. “He was the man who cared for the animals and I learned a lot from him.”

Ezekiela attended school in Aitutaki until the headmaster made an announcement which motivated him to quit school – in Grade 5.

“I went to school one day and the headmaster came around and said there are a lot of children coming to school, but we don’t have any room, so if any of you can make way … so I did, I left.”

Ezekiela has no regrets about leaving school.

He was happy to be at home, learning how to fix engines and “anything” with the guidance of his brother Tukua.

“My schooling was at home, it didn’t really worry me.”

In the early to mid-1950s, he moved to Rarotonga to start his new job at the short-wave broadcasting service stations.

“I managed to do all the things that were given to me to do like checking the engines, battery charges, the batteries and checking that the battery acid temperature was fine. I knew what to do.”

Things got more interesting when he was asked to climb the pole mast antenna.

The highest transmitter mast Ezekiela climbed was at Black Rock, which he says stood at about 220 metres.

“I had to check the tension of the stay wire of the mast, that’s the reason why I had to go up the mast.

“And when we found out the airport was to be built, they told us the tower at Black Rock had to come down because of the landing of the plane. So, bit by bit I pulled that down to about 100 feet,” shares Ezekiela.

He recalled another young man who had climbed up to assist him but couldn’t stop talking – which Ezekiela had no time for.

Before the tower was pulled down bit by bit he had mentioned to his boss that it was wasting time and to “just pull it down in the direction where it won’t hit the house, but he didn’t listen … so it took a while to pull it down, then I did the last bit my way”.

His responsibilities also comprised of “fixing up bad engines”.

Each of the Pa Enua were supplied three engines and radiators which charge the batteries to keep the station working.

When an engine stopped working, he would travel to the island to fix it, or the part would be sent to Rarotonga.

“So, I’ve been right around to all the islands except Pukapuka/Nassau and Suwarrow to fix things.”

Before he retired, the radio stations ran out of work. He then moved to the airport to work for a year and retired after 33 years of service, at the age of 51.

Not one to remain idle, Ezekiela got into farming and used to plant four to five acres of produce.

He married his wife Temaui Arii James Vahua (nee Vahua) in Rarotonga – at the time she worked as a “translator” for the government.

They have 12 children. Two of their children passed away when they were both adults.

These days, Ezekiela spends three days a week at the Are Pa Metua elderly centre. He is one of the longest surviving members since the organisation began.

Ezekiela is also one of only two men who attend the centre, all the rest are women and he would like to see more men be part of the group.

“There’s no men here (Are Pa Metua). Sometimes I’m busy at home but I still come along, Puna comes sometimes but usually, its me and ladies,” he says with a smile.