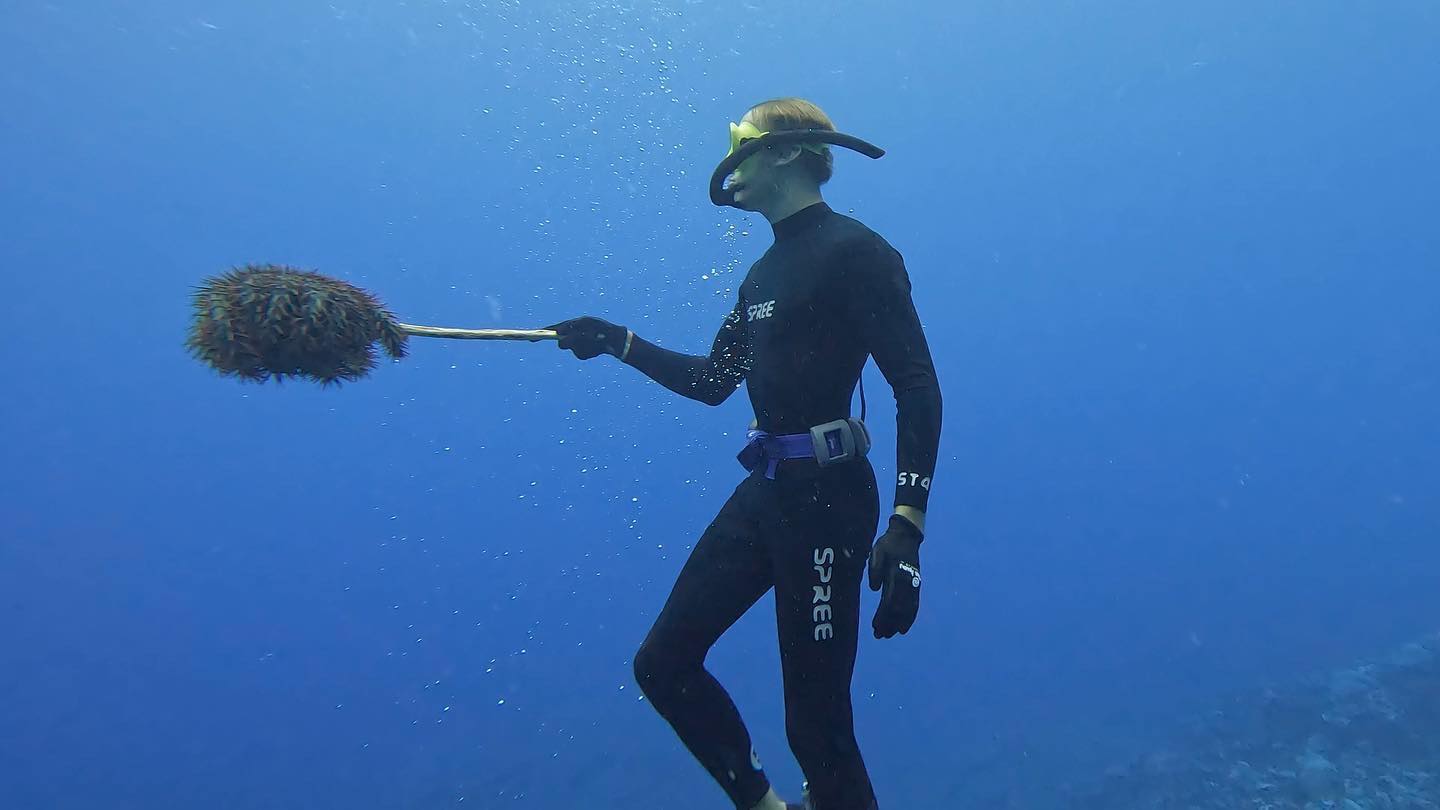 Local divers go out to save Rarotonga’s reef from Taramea (crown of thorns starfish) on Thursday as part of CNN’s Call to Earth Day, journalist Caleb Fotheringham talks to some of them.

Its tricky business removing destructive starfish Taramea from the reef. First divers have to spot them which can be a challenge, with the starfish often sitting in small crevasses. Then they need to slide an ironwood stick under the starfish to pull it off, being careful not to rip it in half, damage the coral or get pricked. If the starfish does split during the process, it can regenerate from its parts.

It’s a hard job, but one that’s been undertaken by local free divers and scuba divers since 2020 after a crown of thorns outbreak was discovered in 2019.

More than 5000 taramea have been removed from Rarotonga’s reef since it started.

Over 30 divers and six boats departed Avatiu wharf on Thursday afternoon as part of CNN’s Call to Earth Day. The result was 103 Taramea collected.

Many of the divers were young, including 10-year-old Luca Rossouw who recently got his open water scuba licence.

For free diver, Apolo Johnson, it was his first time going out.

“It was pretty interesting because I do a lot of spearfishing, and we don’t see a lot of the crown of thorns,” Johnson says.

“We may have spotted them once or twice but I was so shocked when we went out, actually looking for them was a totally different experience because we spotted 10.

“I was quite shocked how we could spot them easily.”

Johnson is happy to have joined the group and wants to continue and also help out the outer islands.

“Doing this is a great thing for the reef and the marine life.”

Seventeen-year-old, Pareu Pera was one of NGO Kōrero o te ‘Ōrau’s students who took part in the dive.

“It was really good,” Pera says after the dive.

“It’s really good seeing a lot of us going out there and getting this stuff of the reef.”

Two of the younger members also in attendance was Katherine Lowry, 15, and Caroline Marsters, 17, who both got their open water scuba certificates at the same time last year.

Marsters says the “vibe was awesome” collecting the crown of thorns starfish.

“This actually helps, it does a big thing for the reef, and it’s fun, you get to socialise with people, you get to learn new things.”

Marsters and Lowry didn’t manage to find any Taramea but they both say they will continue going out.

“It’s hard to get your eye into it but once you start spotting them then you can see where the bleached areas are on the coral, then you understand what to look for and you find quite a lot,” Pegg says.

“A lot of them are tucked away in tiny little crevasses so you really have to be looking underneath everything.”

Lisa Barker, also working for Dive Rarotonga, says she had dived in the Philippines for the crown of thorns.

“It was much worse over there, they were a lot easier to find. It was really hard to find them here, where there (in the Philippines) they were very obvious,” says Barker, who is also from the UK.

“They’ve been working on this patch so they were making an improvement.”