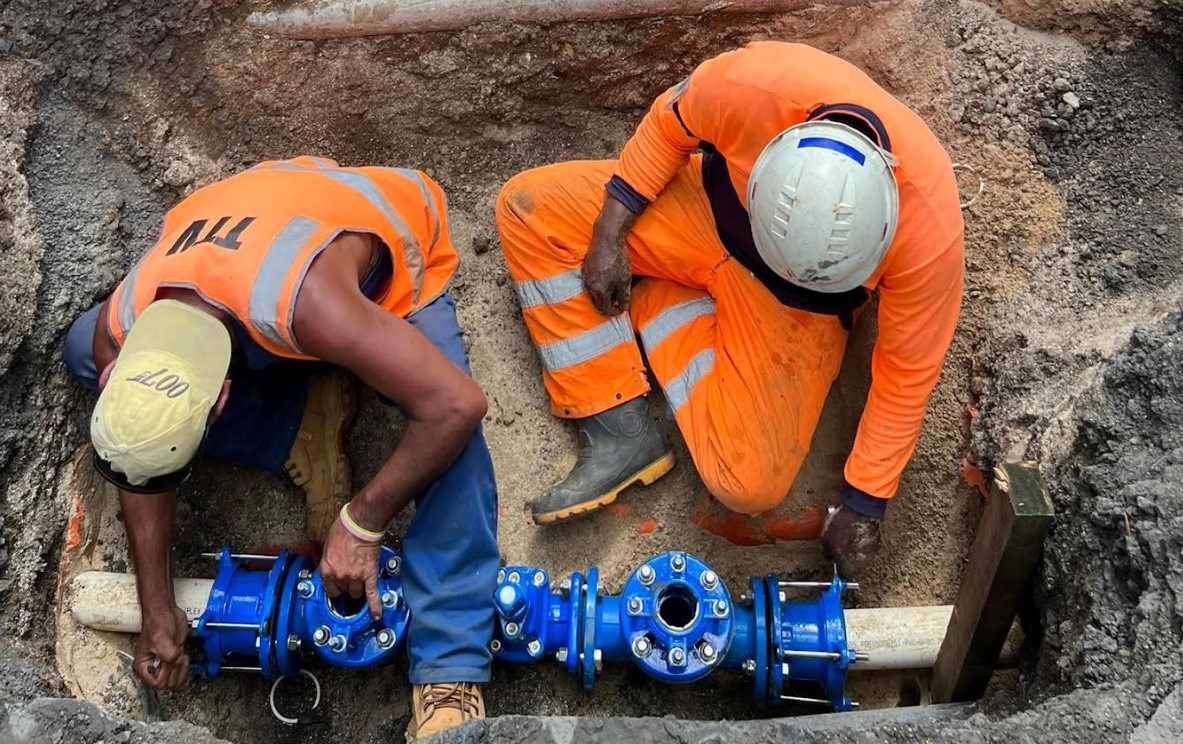 To Tatou Vai is tasked to manage and operate the public water supply for Rarotonga. TTV/22102307

Over the weekend the heavens opened and down came the rain, filling the catchment intakes, increasing water pressure in households and bringing much needed relief to the dire water shortage the island has been experiencing. But more rain is needed to replenish the drying intakes.

A good steady amount of rain in the central high country for several days or a week is needed to recharge our stream, says Walter Tuarae-White, To Tatou Vai’s customer service and resolutions supervisor.

Since August, To Tatou Vai – tasked to manage and operate the public water supply for Rarotonga – had put out notices about conserving water in the community.

As of last Friday (October 21), seven of the water plants (intakes) were operating at 50 per cent below their design output, said r Tuarae-White.

The Avana intake which is the most productive catchment was flowing at 17.8 litres per second, when usually it runs at 30-35 litres. This catchment feeds a large area from Avana right around the island to Black Rock.

Puaikura’s Ngatoe intake is the only catchment that supplies the back road districts from Rutaki to the hospital and was flowing at 7.9 litre per second compared to its usual 12 litres+.

“These decreases in stream flows have a great impact on water pressure reaching some locations in that zone during a dry spell,” said Tuarae-White.

According to Tuarae-White, the low water levels are not usual at this time of the year.

With an annual rainfall of 2000 millimetres – two thirds of this comes from November to April (which links to our tropical cyclone season) while the remaining third during the driest period from May to October – explained Tuarae-White.

For Rarotonga, the driest months are the cooler months of July and August.

“However, when we are in a La Nina episode, the cloud cover is reduced, thus reducing also the amount of rainfall for the country.”

During a dry spell people needed to be mindful of their usage of water, he said.

Rarotonga’s reticulation network has never been metered “so that hard data isn’t available and anything published arguably wouldn’t be accurate”.

According to Tuarae-White, it takes a recommended 50 litres per day to meet one person’s basic water needs.

The average per person water use varies across locations/countries, in New Zealand it is 220 litre per day, Australia 179 litre and Samoa 165 litre.

To Tatou Vai is currently trialling and zone metering an area to determine water usage at households to collect important water usage data.

“We live on an island with rain being our only source of water, so from that perspective we need to be mindful of how we use water regardless of seasons.”

Tuarae-White says most of the water loss or waste are from hoses that are left running all day every day coupled with faulty unrepaired pipes.

Some leaks are caused by land clearing, grass cutting or because of the deterioration of the old pipes/hoses.

“The leaking hoses or pipes can be found all over the island on vacant land, plantations and all sorts of properties. The property owner is responsible for repairing their leaks,” said Tuarae-White.

Produce farmers need water for their crops, so far TTV have not seen very many tanks in plantations.

“It’s been frustrating to see some irrigation lines left running continuously and we urge those responsible to do better.”

With international borders reopening in January this year, Tuarae-White said they anticipated accommodation operations consuming a greater amount of water due to their services and occupancy.

Some of the larger hotels have storage and rainwater catchment but privately owned pools are filled from water mains, he said.

“We are in the process of doing an island wide survey to determine storage, capacity, rain water harvesting and general usage which is a mammoth task.

“Without the proper instruments in place anything would be a guess.

“Given our situation we have reached out to Cook Islands Tourism who have responded positively in communicating with the industry.”

During the two years of Covid-19 when the nation’s borders were closed, the water usage was still high despite the decline in the population, said Tuarae-White.

“The 10 catchments produce an average of 18-20,000 cubic metre per day at optimum – when the stream flows are good.

“We were still consuming around 50 per cent (9000-10000m3) and with the increase of visitor numbers on the island particularly peak months June – September it’s only logical consumption would be higher. The extra demand coupled with our low stream levels naturally stresses the network.”

To Tatou Vai’s daily output in the past few weeks is around 11,500 cubic metre per day.

“We are extracting everything that comes from our streams without any overflow going over the weirs,” he said.

“We are not here to point fingers at specific sectors rather we seek consensus and cooperation from all of our community including industry, agriculture, government bodies, residents and right down to our children to come together and look after our water.”