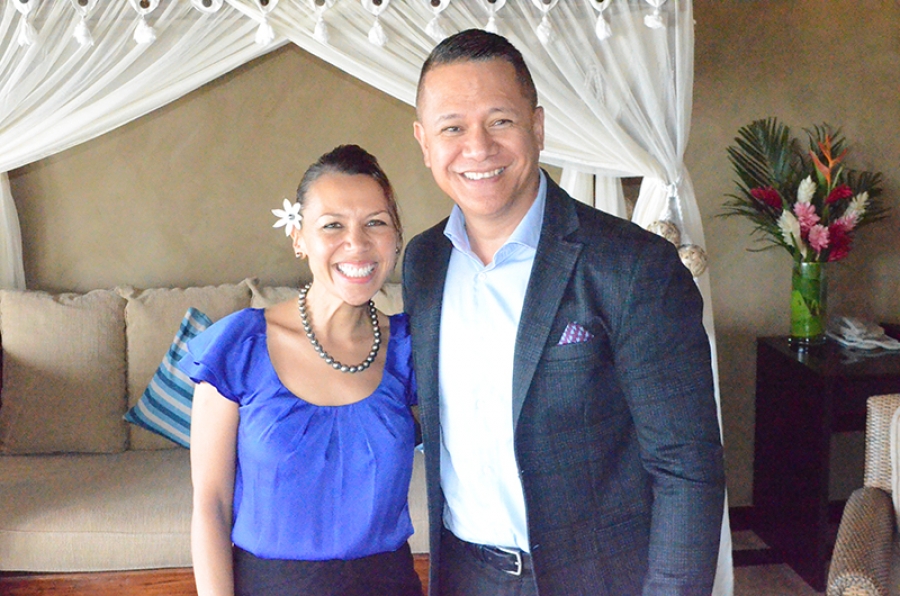 Natalie and Jeff Tikitau have returned to the Cook Islands after living in France. 17110310

Cook Islands power couple Jeff and Natalie Tikitau have returned to their island, after taking the real estate world on the French Riviera by storm.

Both hotel managers by trade, Jeff is a local by way of Arorangi and Nikao, as well as of Tahitian decent, while Natalie French, Samoan and Kiwi.

“So we both have French passports and New Zealand ones. So we’re both French, and we’ve lived in French Polynesia and managed resorts over there for seven years. We’ve got 35 years combined experience in hotel management,” Jeff Tikitau said.

Jeff also has quite the family history in Tahiti and the Cook Islands, as his grandfather was Tinomana Ariki the third, while his aunty is Pa Ariki of the Cook Islands. The couple became involved in real estate as recently as 2015, after they booked a one-way ticket to live and work in Nice, France.

“While we were over there we marketed ourselves differently. We looked at how all the applicants were marketing themselves, by just sending in their normal CVs, so what we did was, we took a photo of ourselves dressed professionally, put it in the paper and on websites up there.

“Natalie is a sales and marketing director, and the feedback we got was that our CVs was very strong, and the real estate chief executive of Nice Pebbles, Gayle Roberts, actually flew over from London to meet us.

“She was intrigued after meeting us and wanted to use our skills, and create positions in her company as she felt that we would be assets to her leading British company.

When the Tikitaus sent through their CVs they didn’t have any expectations; they just wanted to be different from everyone else and when they saw an opportunity in the industry, they exploited it.

“I said to Gayle that we would be happy just to be cleaners in your villas, but in fact she gave us a position running real estate sales. We worked hard and did well. It was obviously new for us, and in that environment you either sink or swim.

“Because there are people from all over the world competing against you. It became a passion for us. And as with anything in life, you don’t give up. As a couple we don’t give up.

“And it was a challenging environment too, because during the time we were there was Brexit (Britain’s decision to exit the Euro, as well as the US election.”

Although the French Riviera lifestyle is totally opposite to that in the islands, the transition was made easier for the couple thanks to their time in French Polynesia, as they already spoke French, and had worked in French hotels.

Jeff also brought his island pride with him to France, much to the amazement of the people he met over there.

“You never forget who you are, where you came from, and in fact when I was in France, I did a lot of free advertising for CI Tourism. Because a lot of the people over there were intrigued by me.

“A lot of our clients, they realised that we weren’t from here and when we showed them where we were from, they said “that’s where we want to be”.

“We had a lot of high profile clients from Dubai, Russia, UK, US and Middle East, and none of them had heard of the Cook Islands. So that’s why I advertised my island. I showed them Muri Beach and Aitutaki.

“And when they asked about Aitutaki, I said that it was like Bora Bora, but better,” Jeff says with a smile.

Having returned to Rarotonga for family reasons, the couple want to continue to bring that same work ethic, compassion and island pride to their business over here.

The business is Jeff Tikitau Real Estate Cook Islands, which also specialises in property management, and they believe they will bring a fresh, new, innovative, professional approach to the island.

“The passion for real estate was the reason behind our launch, to bring our international realty experience and professionalism back to the island. And we want to continue that journey here, with the same passion, the same drive

“As taught by my parents Tua and Estelle Tikitau, The Cook Islands culture is all about people, and being interested in people. I’m passionate about people. I’m about providing a professional service, and fulfilling people’s dreams.”

You can also phone 53658, or visit the website at www.jefftikitaurealestate.com.