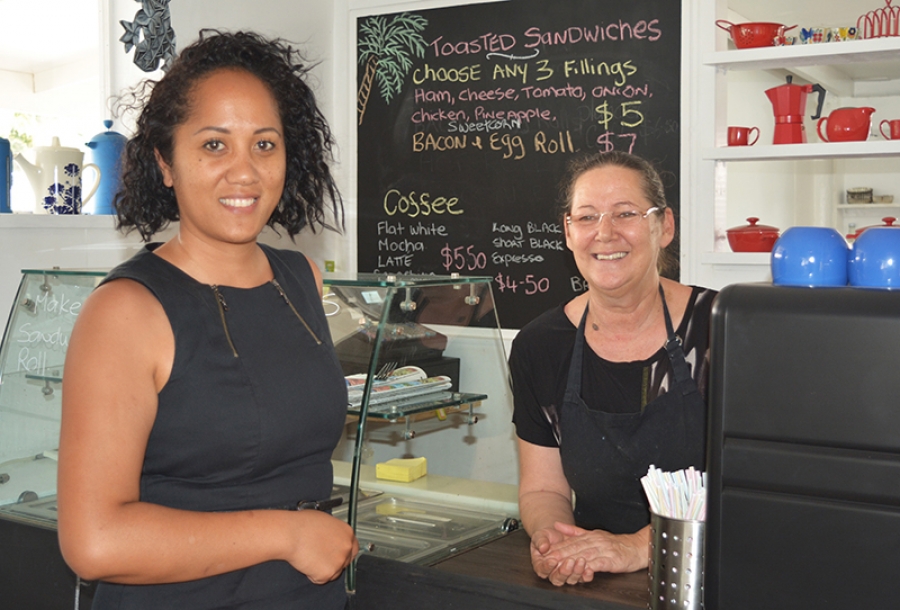 Chiavanni Le'Mon, left, dropped by to say “thank you” for the sandwich she enjoyed earlier during the day. 17092913

“Give me two minutes, please,” said a busy Tina Daly before disappearing in the kitchen.

It was little after lunchtime, but Bus Stop Café at the Cooks Corner was still bustling with customers.

I tried to avoid the hustle and bustle, only to find myself in the centre of café. It wasn’t the perfect spot to get myself out of the way, but probably the best place from which to make some observations.

On my right were three older men, cracking jokes about each other as they waited to be served.

They asked for a cherry top, Monique obliged, and returned with the topping of their choice.

“Much better,” one quipped, before they indulged in their hearty dessert.

I was in no hurry and used the time to catch up with a friend in New Zealand via Facebook to discuss politics.

“So sorry for making you wait this long. It’s been a busy day,” said Daly while settling down on a nicely-cushioned stool opposite me, before starting out on how the business she now manages, began.

“This opportunity came up when this space became available and the landlord, Ben Bergman asked me if I was interested in taking it. I said to him that I would like to think about it…

“I remember the days when this place was run by Maureen and Garth Young. They ran it as a coffee café, very similar to what we are doing.

“I have actually gone back a little bit old school, I’ve gone back to what I remember this café once was. Home baked pies and quiches, sausage rolls, sandwiches, scones ... easy and convenient meals.”

The Bus Stop Café started a month ago with the intention of mainly catering to those travelling in and out on the buses, with quick and easy meals.

The place is owned by Moana Matapo, who also owns the neighbouring Courtyard Café and managed by the energetic Daly and her hardworking team.

On busy days, she has support from family members, including sister Maria File whose art works are on sale at the café.

“Back in the days when we opened up a café at the airport in 1991 or ’92, the only cafes or fast food places were the Palace Takeaway (and) Mamas Café which was next door to Foodland. Then there was this one run by Maureen and Garth at that time and the Bluenote Café.

“That was basically all that was back then,” Daly said.

“And you look at it today, my goodness, you have little cafés everywhere. So we’re trying to do something little bit different to what others are doing.”

The concept of Bus Stop Café was born out of an experience Daly had few weeks ago.

During one of her Sunday drives around the island, she stopped by a café for a quick bite. She was disappointed to find they did not serve ready-made quick meals.

“I don’t like waiting. What I wanted was to stop somewhere and grab a sandwich or a pie. Just walk in, pick, pay at the counter and back in the car on my way.

“Well, we stopped all the way around the island and there was nothing. Even the eateries that had café signs, it was all menu food so you have to go and sit there, read the menu and then order and they will cook for you. That takes a while.

“That (experience) inspired me to what we are doing here. We are trying to put out a menu where people don’t have to wait. They just walk in, pay and eat.

“We really don’t have to cook for anybody unless they want a bacon and egg roll or a toasted sandwich but that only takes about five minutes.

“We do breakfasts here as well, and that doesn’t take long at all to do.”

The business hasn’t got off to an easy start. In fact, it was a bit of a bumpy ride for the Bus Stop Café, which initially started without a coffee machine of its own.

Instead they did percolated coffee before local coffee brewer Neil Dearlove loaned them a small coffee machine.

Four weeks later, they finally have their own espresso machine up and running.

“We still have a few teething problems but we’re getting there.”

After over two decades in the food business, no problem is insurmountable for Daly.

She ran a café at the airport for 18 years and has been cooking roast lamb, lasagna, roast pork and similar dishes for about 25 years.

“The response we are getting is amazing. What really surprises me is that a lot of locals are coming down, and what they are pleased to see is just the very basic home cooking like scones, toasted sandwiches and filled rolls.

“We do have a subway kind of service which next week will be turned into a subway and a salad bar so then people can come in and they can choose their salad.

“Our food and service is very convenient for tourists and locals especially those who are in a hurry.

“Since Courtyard Café is part of us, we also take orders for meals they serve and bring them to our customers for their convenience. Courtyard Café does the same with the meals we serve.”

The friendly Bus Stop Café is open 6am to 4.30pm from Monday to Friday and 6am to 2.30pm on Saturday.