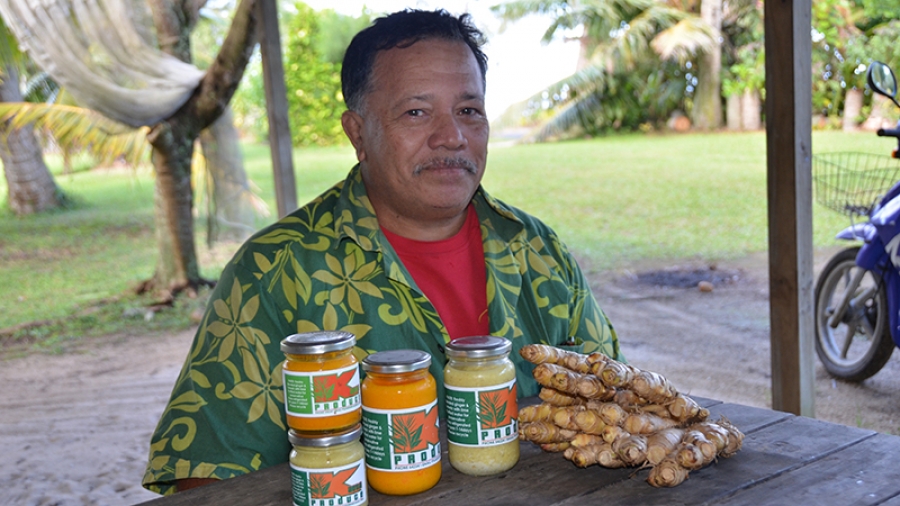 GO LOCAL: Kaota Tuariki saw beauty in ginger (kopi teatea) for the first time when he was shown the root crop by the late Robert Wigmore.

He was intrigued by the beautiful plant, Wigmore explained its health attributes and assured him the particular variety was the best local grade ginger.

Renga (turmeric), a cousin of the ginger plant, grows wild on the island. It is an ancient superfood that's been used for thousands of years as both a herb and cooking ingredient.

Inspired by the plants, Tuariki planted his first small sized crop in 2005. Each year he would replant and replant.

In 2010 his labour of love with turmeric and ginger was rewarded: he had enough crops to harvest the root extracts and started selling at the Punanga Nui Market.

Born on Rarotonga, Tuariki was brought up in Rutaki. His father Tuariki Takave and his grandfather is Takave Tuiti were planters. “We grew oranges, tomatoes and bananas; our jobs as kids was to weed the plantations and pick the oranges when they were ready.”

His wife Poko Mazel’s father was also a planter, “I learnt from him too.”

“Planting was the easy part, but it’s the maintenance of the crops, like keeping the weeds down that is labour intensive.”

In 2012 he participated in a Ministry of Agriculture processing workshop to learn how to make chutneys and jams.

The workshop inspired him to look into crushed tumeric and ginger – and so, the Kaota Produce label was created and ginger and turmeric were pulped.

“This is an easier option for people and saves time, and the bright yellow turmeric root extract can stain your hands.

“Add a teaspoon to a cup of boiling or cold water to drink, or to your soups and cooking to help keep the colds away in this winter season,” said Tuariki.

There are no preservative additives to the pulp, so the product must be refrigerated soon after the jar has been opened. Another trick is to pour the pulp into ice cube trays and freeze, and pop out the cubes as you need them.

Tuariki is grateful to his sister-in-law Teumere Tairi who sells his produce at the market and William Wigmore who has assisted with jar aspect of the business.

Bags of ginger and turmeric pulps frozen and vacuum packed are also available but only on order.

A special pink ginger that is popular with the sashimi dishes, will also be at the market for the first time on Saturday.

His produce can be found at Wigmore’s, the CITC Kavera Store and, on Wednesdays and Saturdays, at the Punanga Nui market in Avatiu.