Will Crummer croons away the years 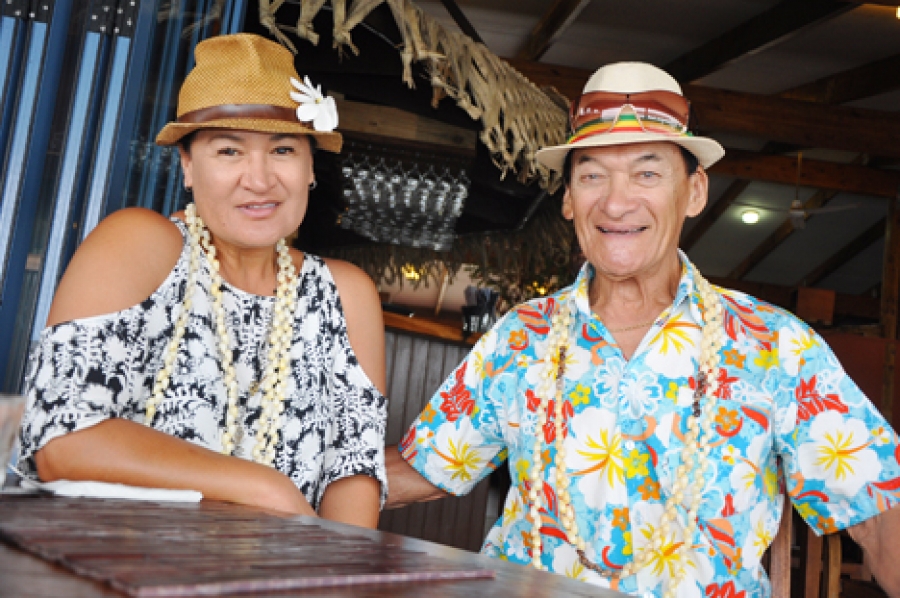 Annie and dad Will Crummer pictured during their candid interview with Cook Islands News. The pair performed at two successful New Year Concerts in Muri and in Aitutaki where Will's smooth, soulful classic Rarotongan songs took older people in the crowd back to their youth.

“I’m back in the race, I’m racing and I love it baby!” are the enthusiastic words Rarotonga master singer Will Crummer uses to describe a singing career that started many years ago, and continues to grow.

Regarded as a living Pacific treasure, the 70-year old entertainer returned home to Rarotonga after an absence of 55 years to kickstart the 50th anniversary of the nation’s self-governance.

He was accompanied by his band the Royal Rarotongans and his talented daughter Annie Crummer – one of New Zealand's most successful and best-loved singing stars.

“Te ruperupe nei rae to tatou ipukarea,” he says of the unspoilt paradise home he left all those years ago for greener pastures in New Zealand.

While Papa Will couldn’t say exactly when he left Rarotonga, he recalls growing up in Turangi surrounded by music including his mother’s singing, his grandfather's wind-up gramophone and the ukuleles and handmade percussion of the local string bands.

The radio brought him exotic voices from across the seas: Nat 'King' Cole, Jim Reeves, Pat Boone and Elvis Presley were a few of his favourites.

From these rich sources he developed his own personal singing style, blending the crooning of the pop stars with the rich and romantic tradition of Rarotongan songs.

In Auckland’s thriving Polynesian music scene in the ‘60s, Will Crummer quickly became a household name, singing at popular inner-city nightspots such as The Orange Ballroom and The Reefcomber.

Family life slowed down his professional career, while his daughter Annie Crummer’s singing career began to take off.

With encouragement from his daughter, Will returned to the stage eight years ago bringing back his classic soulful Rarotonga songs.

“I love it baby,” he says of being back in the busy music industry.

He admits that after a long break he needed to re-train his voice. But his dance moves were never forgotten.

“It’s our culture to dance and I dance in between sets and dance while I’m singing and people love it,” says Will who nodded approvingly when he was described as the Mick Jagger of Polynesia.

“Other people just stand around on the stage. Not me, I ura; this is part of entertaining and of course it’s our culture!”

He says crowds in New Zealand and even in Penang, Malaysia where he performed last year love his shows because of his dancing. Daughter Annie adds that the crowds love Will because of his passionate singing style that comes straight from the heart.

“I sang for a big crowd at the Auckland Town Hall and they gave me a standing ovation. even though they didn’t understand the words of my Rarotongan songs!”

Papa Will’s enthusiasm and energy was there for all to see when he danced his way off the plane to the pulsating beats of island drums on his return home to kick off the Cook Islands New Year celebrations in style.

“You’ve got to keep fit to be in this business,” says Papa Will, a member of several running clubs in Auckland.

His dancing routine off the plane on his return home was not an act he had to train for.

“I came off the plane and heard the pate (drum) and my heart just leapt for joy and my joy danced its way out. I just couldn’t help it!”

His energy spread across the 2000-strong crowd that turned out to Nukupure Park for the Tarekareka concert and the 300 who enjoyed his soulful songs in Aitutaki.

For Will both concerts were very emotional.

“My heart cried tears as I watched our people dancing and singing my songs back at me!”

He says he had to fight back the tears and keep singing, as people of all generations serenaded back at him.

“I couldn’t believe that even the mapu, the young people knew the words to my songs and were singing with me!

“Dad still has a quality voice that’s as young as ever!” chips in daughter Annie.

The highlight for the music stars was watching the mamas at both the Rarotonga and Aitutaki concerts dancing among the crowds.

“You could see from the stage when these mamas got up to dance, the years melted away and they danced as if they were 20 again,” says Annie.

“It was just amazing to see these women walk and dance up towards the stage with their arms outstretched to dad, it was just beautiful.”

Annie says her dad is proof that anyone can do anything they want, at any age.

With the ‘business’ side of their visit to Rarotonga successfully completed, Will and Annie are spending quality time with family on Rarotonga for a few more days before returning to New Zealand to prepare for upcoming gigs at the Auckland Festival and Waitangi Day celebrations.

The pair also plan to work closely with creative company Motone Productions, who organised the Tarekareka concert, for more regional events and maybe another homecoming concert.

“We love Motone – they are just so professional and wonderful and we look forward to working with them in future events,” says Annie.

Keep tuned for a possible return of Annie Crummer and the energetic Will Crummer.