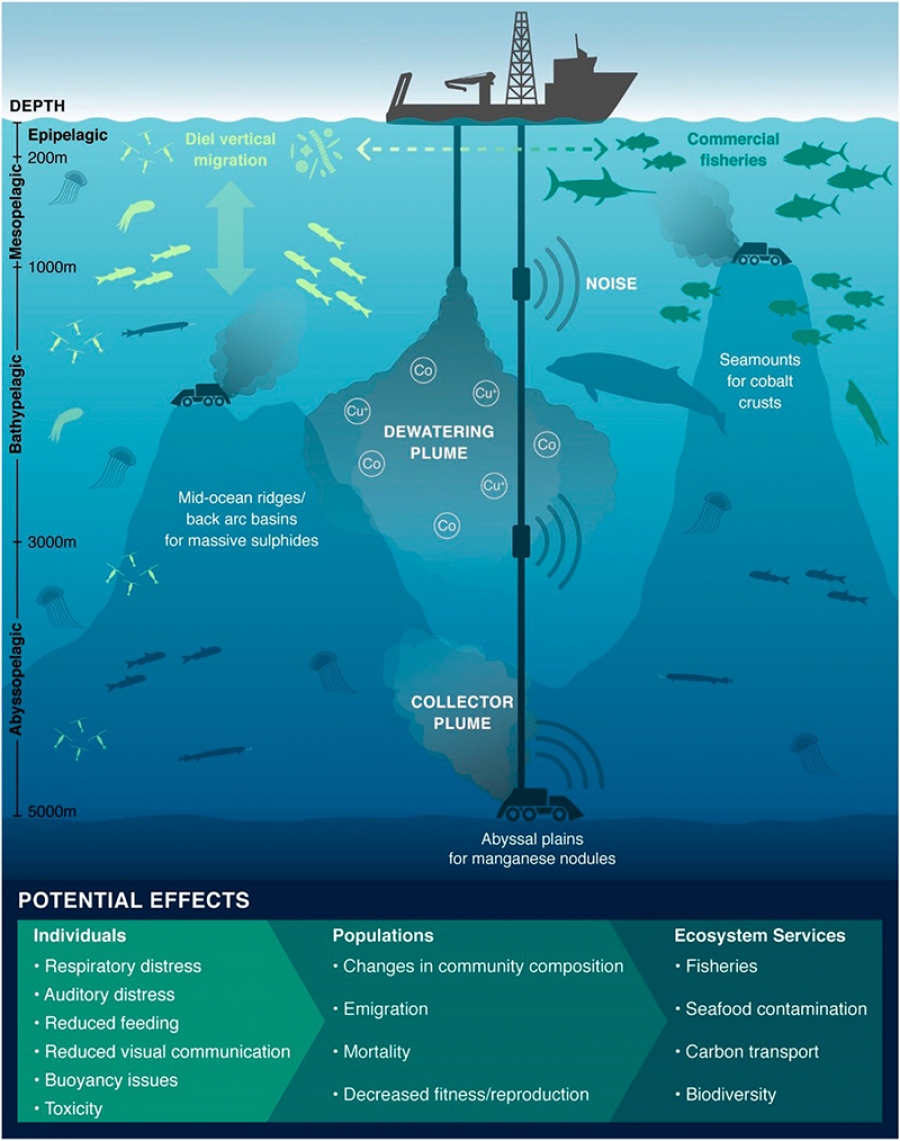 OPINION: Deep seabed mining could cause irreversible harm to our oceans, from the seafloor to the surface and the midwater columns in between.

Industrial scale deep seabed mineral mining (DSM) has never successfully occurred anywhere in the world. This is due, in part, because the deep oceans are poorly understood.

The immense pressure, at depths of 200 metres and more, makes it difficult to access and expensive to explore and monitor. However, for over a decade, scientists have been warning the international community of the alarming shifts the ocean’s water column is experiencing, and is expected to experience, as a result of climate change.

The deep-sea water column (&gt;200m) makes up roughly 93 per cent of habitable ecosystem for the entire planet, land and sea, and plays a vital role in sustaining marine biodiversity. It has only been in the last decade that we have begun studying the shallowest part of this immense ecosystem: the mesopelagic water column (200-1000m), also known as the twilight zone. Current modelling predicts that the twilight zone’s fish populations are abundant. A 2016 report by the National Institute for Water and Atmospheric Research (NIWA) for the Pacific Community (SPC) highlighted sediment plumes and ecotoxicity as “consistently important, and uncertain, threats to fisheries” in the Pacific.

The importance of this water column on global biodiversity cannot be understated. It is therefore vital that we recognise and seek to fully understand the unavoidable impacts DSM will have on this region and the consequences of those impacts on the rest of the ocean systems, specifically the Cook Islands fisheries. To ensure effective protection of the marine environments, and to comply with the United Nations Convention on the Law of the Sea (UNCLOS) requirement to avoid causing “serious harm”, the Cook Islands must ensure a precautionary approach to any mineral activity, including exploratory mining activities.

The precautionary approach has been established as a valuable tool for environmental protection within international law. Article 15 of the 1992 Rio Declaration on Environment and Development states:

In order to protect the environment, the precautionary approach shall be widely applied by States according to their capabilities. Where there are threats of serious or irreversible damage, lack of full scientific certainty shall not be used as a reason for postponing cost-effective measures to prevent environmental degradation.

It is possible that permitted exploratory mining activities, even cautiously applied, can cause irreversible harm due to a lack of scientific certainty. In fact, it is generally accepted that DSM activities will inevitably cause irreversible loss of marine biodiversity with still unknown flow-on effects to the rest of the ocean system. It is therefore important that the Cook Islands fully understand the “threats of serious or irreversible damage” that exist prior to issuing mining licenses and approving applications.

It is crucial that we take precaution-based steps to understanding the impacts of DSM, not only on the deep seabed but throughout the midwater column, our shallow water shorelines and our beaches.

To fully comprehend the risks of rushing this process and the importance of supporting the international calls for a 10-year deep-sea mining moratorium, it is useful to look at other experiences in the Pacific. We will look at these case studies in our next article in this series.

This is the fourth article in a series on deep sea mining.