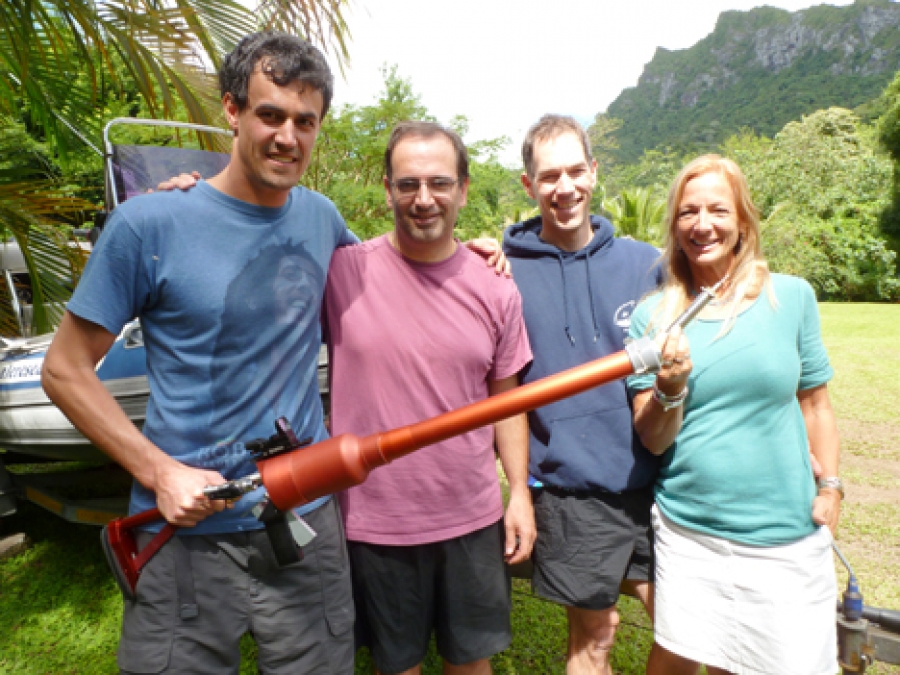 Three scientists and an expert shooter are out on the water performing the highly dangerous task of tagging 10 humpback whales off Rarotonga this week.

It is only the second time satellite transmitter tags have been deployed on whales in the Cook Islands, with the aim being to gain valuable information about the endangered mammals.

Hauser, Director of the Center for Cetacean Research and Conservation, said the tags have to be fired at each whale from between two and five metres away, placing the boat and crew in a precarious position.

“I’m the driver and if I do one thing wrong we’re dead. It’s the most dangerous thing I’ve ever done. We have a back-up boat with emergency care and a whole evacuation plan set up in case of injuries.”
Sucunza, who has flown across from Brazil, is something of a legend when it comes to whale tagging.

“He has a gift. It requires quite a bit of training,” Zerbini said.

He said that because each tag has to be deployed at a right-angle to the whale’s body, the taller the shooter the better the penetration.

“Federico has the height. An extra 20cm of height makes a huge difference sometimes.”

Each tag costs $3600 and it’s taken Hauser years to save enough money to buy seven of them. An eighth tag has been donated by Muri Beach Club Hotel and two more by Peter Seligmann, head of Conservation International.

Horton said this will be only the second time the endangered Oceania Humpback whales are tracked from the Cook Islands.

The last documented track, recorded by Hauser in 2007, showed several whales moved directly from Rarotonga to American Samoa before making the long journey from their tropical calving grounds to feeding grounds in the Antarctic.

“We still lack basic knowledge about humpback whale movement, but past research indicates that Rarotonga largely serves as a stop-over site for whales in transit to other areas across Oceania,” Horton said.

Deploying transmitter tags on whales as they pass through Rarotonga will offer a better understanding of how these whales disperse and what migration corridors they use, he said.

“One of the key things we’ll try to gain from this data is testing different hypotheses with respect to how they navigate,” Horton said.

Zerbini, who has been involved in tagging whales all over the world for the past decade, said the tags typically last for around a year before splintering and falling off.

Each whale’s movements can be monitored in real time using data from the Argos satellite system. The tags can only send signals when the whales come to the ocean surface.

The tag has to be set at a specific point on the whale’s body, just below and just ahead of the dorsal fin. If the tag misses or bounces off the whale skin, it’s goodbye to $3600.

“We’re so careful. We wait till we know it’s going to work,” Zerbini said.

Hauser said the team will study each whale carefully beforehand, to monitor its behaviour, make sure it’s safe to tag and check it has enough blubber for the tag to bite.

“We only do really fat whales,” Hauser said.

To keep track of the whale tagging programme, follow Hauser’s blog at www.nanhauser.com and Horton’s blog at www.megaptera14.blogspot.co.nz.