Thursday 10 May 2018 | Published in Environment 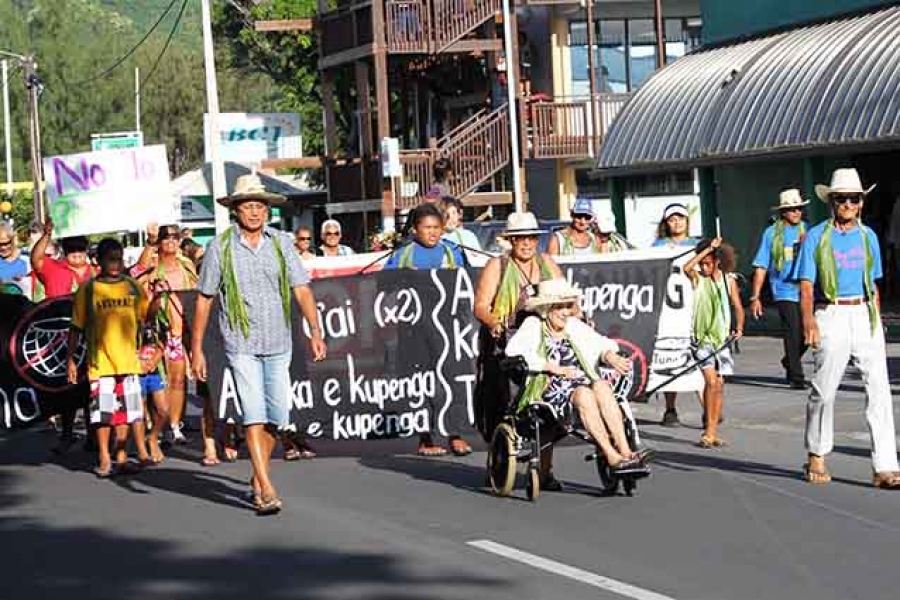 Protests against the purse seine partnership last took place in April 2016. At the head of the march (in wheelchair) is the late Dame Margaret Karika Ariki. PHOTO: TIS. 18050905

An appeal regarding the development of the Cook Islands purse seine fishery in partnership with the European Union (EU) is close to being decided.

Last week, the Cook Islands Court of Appeal heard a case presented by the Aronga Mana of Te Au O Tonga and Te Ipukarea Society for judicial review to be made regarding government decisions relating to industrial purse seine fishing in Cook Islands waters.

The Aronga Mana and Te Ipukarea Society are seeking orders setting aside the government’s decisions to enter the Purse Seine Fishery Plan and Regulations, as well as the Fisheries Partnership Agreement with the EU.

The appeal argues that the government has failed to conduct an environmental impact assessment before making the Fishery Plan and Regulations. The appeal says this is a breach of customary international law, international fisheries treaties, the Marine Resources Act 2005 and the Environment Act 2003.

It is also said that the decisions did not comply with the precautionary approach and were not based on the best scientific evidence available.

The court was also told the government had failed, in breach of the Fishery Plan, to carry out annual consultations with key stakeholders and biennial reviews of the plan. The Aronga Mana and Te Ipukarea Society argued that they are key stakeholders who are required to be consulted.

The appellants in the case say they are pleased with how the appeal went.

“I was impressed with counsel for the appellants and how they were able to articulate aspects of the Akono'anga Tupuna to the court,” says Manavaroa Mataiapo Philip Nicholas.

“It was good to see many of the Aronga Mana at court to support the case,” Nicholas said.

A purse seine fishing licence discussed during the hearing “suggests the government has failed to implement the restrictions on the use of fish aggregating devices (FADs) that are required under the Purse Seine Fishery Plan” says a release from the Aronga Mana and Te Ipukarea Society.

The Fishery Plan imposes a four-month ban on FAD use between July and October each year, but the licence issued to a South Korean vessel in February 2016 only imposed a three-month ban from July to September.

The Aronga Mana and Te Ipukarea Society say they are “very concerned” that the government, “appears to have issued illegal licences”.

“This clearly shows the need for greater transparency from government in relation to the access they grant to foreign fishing vessels to fish in our waters” says the technical director for Te Ipukarea Society, Kelvin Passfield.

“It is crucial that the environmental impacts of large-scale industrial fisheries are properly assessed and that proper restrictions are placed on the use of FADS,” says Passfield. The release says FADs are known to significantly increase the by-catch of bigeye tuna and other vulnerable marine species.

The government has already conceded that it is required to conduct an environmental impact assessment before making decisions, but later sought to withdraw that concession during the Court of Appeal hearing.

The court has made directions for the parties to file further submissions, addressing a number of issues including an international law issue that also arose during the hearing. Final submissions are due on July 5, 2018 and the court’s decision is not expected until after that date.