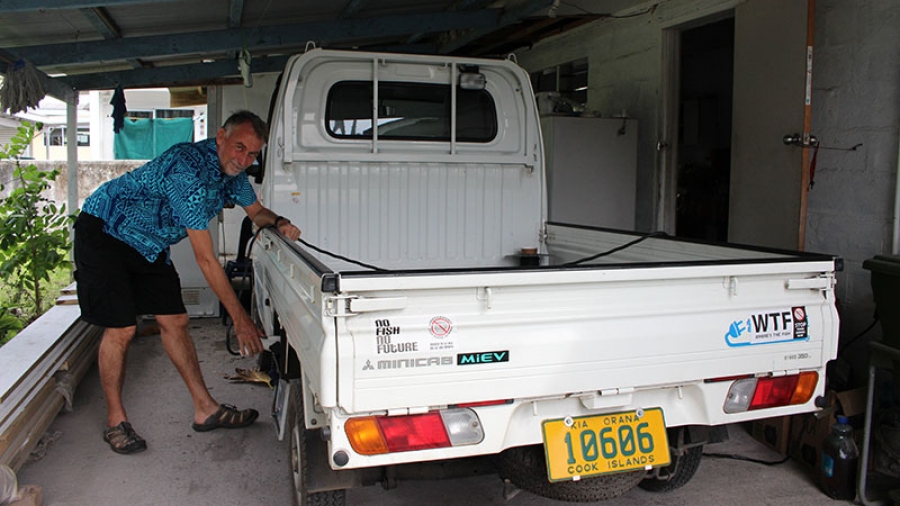 Electric vehicles or EVs are perfect for a place like Rarotonga with a speed limit of 50kmh and a circumference of 32km – and advocates believe they could help both our community and our environment.

Thriving flower and vegetable gardens, solar panels and a fleet of EVs and E-bikes tell the story of Magic Reef Bungalows owners Lawrence Holder and wife Simonne’s dedication to looking after the environment.

The main reason they decided to leave their life behind in New Zealand and relocate to Rarotonga two years ago, was because there was a lot more freedom and less restriction to do the things they were passionate about.

He and his wife Simonne pride themselves on their eco-friendly approach.

Coming from Waiheke Island, in the Hauraki Gulf off the coast of Auckland, they know a thing or two about living a self-sustaining life. On Waiheke, there were a number of people who own electric vehicles and have a solar generated power source.

As a mechanic with 36 years’ experience, Holder has turned his attention from combustion motors to those powered by electricity.

He has put his money where his mouth is and has built a solar charging-station. It’s the only charging station on the island other than the one at Te Aponga Uira.

The bungalow he, Simonne and their little girl Talulah live in has solar panels and the solar charge station also powers an icemaker and the resort’s swimming pool.

On Wednesday, EV owners were invited along to Magic Reef to take a look at the charging station and share their thoughts and concerns about highlights and issues surrounding EV ownership like replacing batteries.

When Holder speaks about solar power generation and EVs enthusiasm oozes from him.

His ultimate goal is to see about 50 per cent of vehicles on Rarotonga running on electricity. This includes passenger cars, vans and one day he says taxis.

“If we could do that within five years could you imagine the creditability that would give us as an environmentally focused island?” he says.

What Holder and his wife love most about Rarotonga is that the people have a “positive get it done attitude”.

They have a deep connection to their culture and to their environment, he says.

The next step for him he says, is to talk to Cook Islands government about looking at how they can further promote EVs, and encouraging an exemption on solar power for residential homes.

Every vehicle that is powered by solar will reduce government expenditure on fuel from overseas, and “that’s got to be a good thing”, Holder says.

And as far as promotion of Rarotonga as an eco-friendly tourist destination goes, Holder believes Cook Islands could be leaders with the Mana Tiaki accreditation and more and more accommodation providers and resorts purchasing and using EVs.

“Anything we do for the environment is going to reflect very well for anyone who comes here,” he says.

Battery bars are everything to EV owners. “We all know how precious we are about our bars don’t we?” Holder says.

Being a mechanic, he also brought all his equipment with him. His future plan is to obtain a premises to work from with a real focus on EVs.

“We aren’t in this for the money. I’m willing to help anyone who wants to purchase the right EV at the right price, a good reliable vehicle that will last at least 10 years,” he says.

Peter and Jolene Heays have “his and hers” Nissan Leaf electric vehicles and were some of the first owners on Rarotonga.

It’s not about saving the world because people just don’t buy into that stuff, Peter says.

But there is a general misconception that an “EV” is gutless, he says.

Peter says his way of converting people is by inviting them to “come and have a drive” and putting the pedal to the metal.

Without sound it’s hard for people to believe that EVs have any power, but it’s definitely there.

When they return for holidays to New Zealand, Jolene says it’s an unusual and weird feeling having to go to a service station to refuel a rental car.

“I usually only go there to buy ice cream,” she says.

Te Ipukarea Society’s technical director Kelvin Passfield has long been an advocate for EVs on Rarotonga.

Not only does he own a Nissan Leaf for his family’s use, but his work truck is a Mitsubishi MiEV minicab.

There are currently about 60 EVs on Rarotonga, he says, four on Aitutaki and at least one that he knows of on Atiu.

In five years, he has only had to fix his Leaf once – when Lawrence Holder discovered a nest of ants in it!

A number of businesses and government owned entities have also jumped on the EV bandwagon including Te Aponga Uira, Vodafone and most recently the Bank of Cook Islands, which has a brand new electric Outlander.

Some Ministers have Hyundai government-issued electric vehicles which is a step in the right direction, Passfield says, but with a price tag of about $60,000 each, a Leaf would be just as good.

Like Holder, Passfield could stand and talk about EVs and solar power all day.

He says there were only about a third of owners at the gathering at Magic Reef.

Passfield says the solar powered charging station could be a real game changer for the e-mobility on the island.

Anyone interested in becoming part of the Cook Islands EV movement or is an EV owner is welcome to get in touch with him at Te Ipukarea Society.