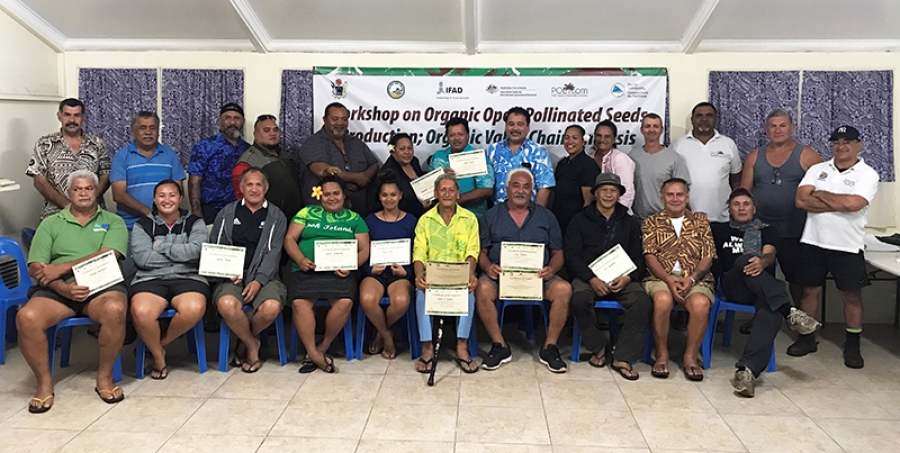 The group of participants who attended this week's workshop on organic open pollinated seed production with organisers and staff. Ten of these participants received organic certification. 18081701

A number of organic farmers gained organic certification at an award ceremony held at the Ministry of Agriculture last night. The awards were presented by Agriculture associate minister Patrick Arioka.

The ceremony was a landmark occasion as the only certified organic growers in Rarotonga up to now have been noni growers. The newly-certified growers also represent a new way to gain certification.

Previously certification was through a third party foreign certifying body and was expensive. This news system, through the Participatory Guarantee System (PGS) means that farmers can certify themselves. A peer review is conducted once or twice a year by farmers themselves to check that farmers are following the rules and regulations set out by the Pacific Organic Standard.

Organic farmer Ray Preston has also been approved for organic processing of dehydrated bananas and other fruits.

There is a growing market for organically grown food, particularly among the tourist population and providing the seeds, equipment, fertiliser, labour and having healthy soil are all important factors, says Pacific Organic and Ethical Trade community coordinator Stephen Hazelman.

“Soil has now become our most important resource,” he says. “We have been killing our soil by adding NPK fertilisers but ignoring its water holding capacity and ignoring its biology. He says with TGA compost now holding certification status as well, it can be used in organic farms and nurseries.

Wayne Mitchell became interested in organic farming during the 28 years he was in Australia.

“I just did the backyard thing over there,” he says. However, a farming programme called “Land Line” attracted his attention.

“They talked about land management and land care. That took me back to my childhood days, where I saw my father and others respect and honour the land, because it keeps us going.”

Now he has half an acre that produces the same amount as 1.5 acres.

“I farm it intensively; you can do that when you look after your soil. It means the plant doesn’t have to struggle for food, the food is right there for it. Let mother nature take care of it.”

Mitchell grows a range of organic herbs and vegetables for the resorts and restaurants. He also uses techniques such as companion planting and also plants macuna which draws and fixes nitrogen into the soil.

“It also kills tarapi, which is a pest. I would say to anyone wanting to start up organic farming, do some research, find out what people want and then get into it.”

Farming has been in Io Vakapora’s family for generations and he remembers helping his father as a young boy.

“At first we were just naturally organic and then the non-organic thing happened everywhere with all the fertilisers, but now we have made the choice to return to organics. It is my passion, my plot of land.”

Vakapora grows and harvests choko, beans, taro and taro leaves. He says open pollination of his tomato and watermelon is something he has been involved in for some time. Vakapora met his wife Missy, a florist, in Auckland.

“Io was in vegetable distribution and I was a florist,” says Missy. The couple now sell their organic produce at Ooa Clinic in Te Papa.

The Natura Kuki Airani organic group will hold its annual general meeting later this month and new members are encouraged to join.

While some farms are in the conversion phase, Stephen says more farmers are welcome to start the organic process by contacting Natura Kuki Airani coordinator Ngairinga Kotrine Iro by emailing ngairingakotrineiro@gmail.com or phone 71778.