Can Muri Lagoon be saved? 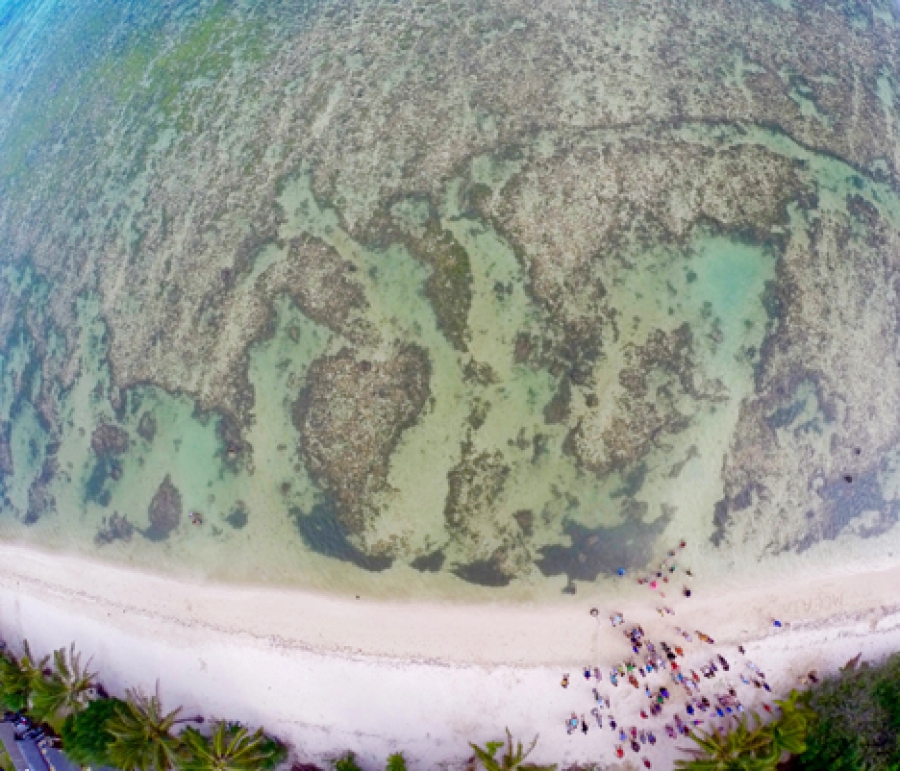 This aerial view showing the current state of Muri lagoon was taken by photographer William Tuiravakai of Island Photo. 15110822

Muri beach and lagoon are considered the crown jewels of Rarotonga – but there are now deep concerns whether this magnificent stretch of sand and water is beyond saving.

For many years international experts have repeatedly warned successive governments that protection of Rarotonga lagoons can only be achieved if high density coastal areas are reticulated to a central sewerage treatment plant or cluster facilities around the island.

One such report by the Asian Development Bank released in 2009 stated doing this would remove all nitrogen and provide appropriate effluent disposal.

The ADB further warned the lagoon is suffering algal blooms primarily as a result of increased nutrient flows from on land sources, causing public health and environmental problems as well as a potentially serious impact upon tourism.

“Algal blooms appear to be restricted to areas where the reef and lagoon are wide with the Muri area appearing to suffer the worst”, stated the ADB report.

That report, and several others have been ignored and the recommended central reticulation system, or cluster facilities around Rarotonga never eventuated.

Instead, the quick fix path of upgrading septic tanks was taken, says businessman and engineer Des Eggelton who has luxury accommodation villas on Muri beach.

“The powers that be targeted private septic tanks rather than high profile tourist accommodation, restaurants and so forth”.

He believes a reticulation system for Muri has been ignored because “some consultant came here and offered a quick solution being the upgrade of septic tanks”.

Eggelton agrees that something had to be done promptly because past investigations showed around 90 percent of septic tanks within 100 metres of the lagoon edge were in very poor condition and not operating correctly.

“NZ Aid jumped on the band wagon quickly and said they would fund. During discussions around the time of the approvals, Eggelton says New Zealand wouldn’t budge on funding septic tanks – “plus no one in government was prepared to stand up and challenge this or attempt to get the focus onto a reticulation system”.

With NZ Aid of $10 million over four years, WATSAN (Water, Waste and Sanitation unit of the Ministry of Infrastructure) was established in 2011 to oversee the sanitation upgrade programme, beginning with Muri and Avana.

Since 2011, the condition of Muri lagoon has deteriorated, nutrient levels have risen and an invasive green algae (Caulerpa cupressoides) is quickly creeping over the lagoon floor covering an area about 50 metres wide and spreading from the Muri Beach Club to the Crystal Blue Lagoon.

A community effort last month collected 1.5 tonnes of the seaweed from a just a third of a 25 by 25 metre test area. The ADB warned seven years ago “the algal blooms have a potentially serious impact upon both tourism and public health”.

Walk along Muri beach and dig a couple of inches below and dark grey, foul sulphur smelling sand appears.

This occurs from the Pacific Resort towards Titikaveka and stops just before private homes. In the opposite direction, grey sand below the beach is found directly outside tourist accommodation along the entire stretch except for the beach area opposite Nukupure rugby field. At low tide the lagoon gives off an unpleasant odour. The worst areas are those infested by the seaweed, the black anoxic sand the algae grows on gives off a repulsive smell.

Eggelton agrees with past reports that a number of satellite sanitation systems would work best “given the islands’ make up and that some reports have recommended this format”.

The 2009 ADB report estimated such a system to cater for Muri and Titikaveka would cost $5.59 million. Between 2011 and 2014, the septic tanks of 239 private property upgrades were completed totalling NZ Aid funding of $ 4.7 million.

All commercial properties along Muri are expected to have upgraded their septic systems by 2016, with some having already installed expensive systems. Treatment by these systems produces a greywater which is used to irrigate the gardens of some of the accommodation properties.

Eggelton says with this effluent discharging to gardens and so on, some of this discharge finds its way to the water table and into the lagoon.

He points out that some of the smaller rental commercial properties with septic tanks were not included in the recent upgrades because they were considered commercial operations. “They were advised that their upgrades had to be self-funded,” he says.

A 2009 study established that lagoon pollution by residential properties to be between 40-45 percent, commercial 30-35 percent and farming 12-15 percent. WATSAN still estimates 40 per cent of pollution into Rarotonga’s lagoon results from contaminated ground water caused by “unsuitable or outdated residential septic tank systems”. WATSAN does not deal with commercial properties.

Current figures for commercial operations could not be obtained from the National Environment Service as the agency told Cook Islands News it doesn’t collect this data, nor Public Health as staff were undergoing a health inspectors workshop this week.

Since 2009 at tourist accommodation has increased by at least 80 extra beds, four new restaurants and new lagoon tours on Muri beach alone.

Eggelton gives the 600 room Fijian Hotel on the Coral coast as a good example of a large property managing its sewerage system well. All greywater is pumped inland and irrigates a huge planting area and taro plots.

“Our problem is generally insufficient land availability but no one here has tried very hard to really do it well”.

Given the current condition of Muri lagoon, Eggelton says no one can say at this time whether upgrading septic tanks has been a success or not, ‘although the present results would suggest not’.

“I’m not sure it’s a total failure – rather the project never went far enough”.