Saturday 16 May 2020 | Written by Melina Etches | Published in Entertainment 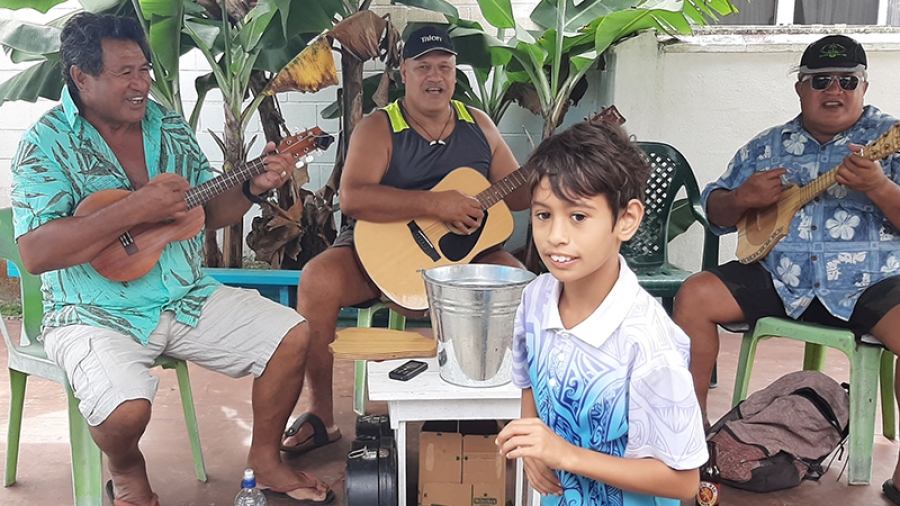 The Carton Band of Steven Kavana, left, Rupe Rima and Tokoa Tairea at the Mooring Fish Café at Avana. 20051580

Steven Kavana reckons he was born into island music, “I’m an islander, I love it, it makes me feel like home, I’m back here, my home land.”

It’s been a long few months of social distancing, with schools, churches, restaurants and bars closed for much of that time.

But tomorrow afternoon, others have that chance to feel at home, when Kavana’s “Carton Band” performs at the Mooring Fish Café – owned by his wife Jillymae.

Kavana is a singer, musician, composer and dancer – and as his alter ego Captain Moko, he’s a fisherman.

He joins up with friends Rupe Rima, Steven Peyroux and Tokoa Tairea to form the Carton Band, and entertain on Sundays.

He loves the old songs from when he was growing up, “songs my parents would sing when entertaining, we grow up with music.”

His appreciation of music began as a child growing up in the village Tutakimoa, in town central.

Surrounded by neigbouring homes of families from Rakahanga, Manihiki and Penrhyn communities, he loved the different styles of song and dance, “and would run from one house to the other, trying to decide who was the best.”

Kavana is grateful he had the opportunity to visit the Pa Euna with his parents, Dr Steven Kavana and mum Tai, who was a nurse, “I had the chance to be right there to listen, see and learn about their cultures.”

The first instrument Kavana played was his dad’s guitar.

“My father was a very good guitarist, I would watch him, then steal it from where he would hide it … he would know, and I’d get a growling. That’s I started enjoying and learning how to play.”

His favourite though, is the ukulele – it’s lighter, smoother and easier for the island tunes.

But he has one unfulfilled dream: “I always dreamed of learning to play the saxophone!”

To name his special songs is difficult – there are too many.

His all-time favourite used to be “Enua Manea”.

But singing the popular song over and over again for 30 years as a member of the Taakoka dance group, he now tires of it.

Now his favourite song is “Fakateretere’ by Tahitian singer Gabilou – which he sang at his wedding to Jillymae.

“We don’t get paid, so please support us and make use of the bucket we have.”