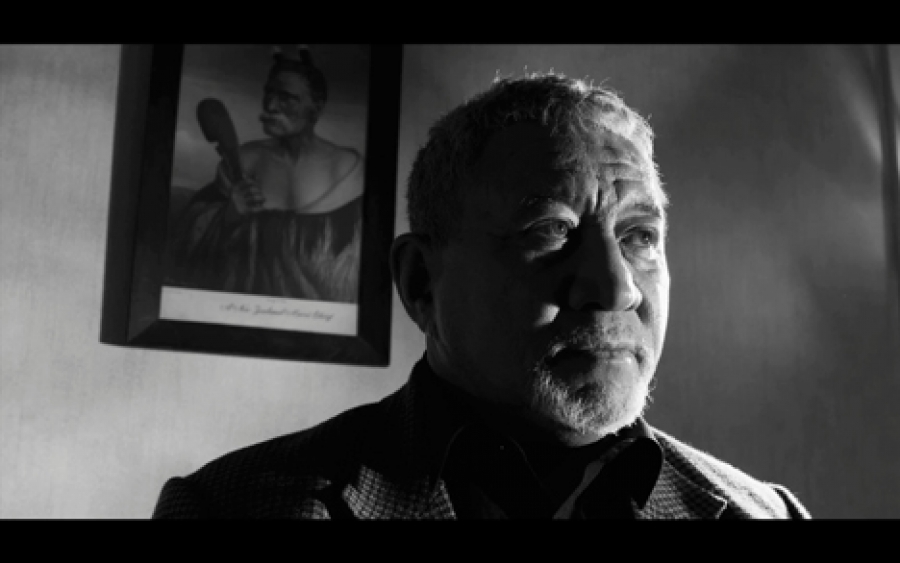 A New Zealand movie featuring a Cook Islands actor has been entered in the International Film Festival to be held in Los Angeles next month.

It has also been entered in the New Zealand International Film Festival to be held in Auckland from July 16 to August 2.

The eight-minute film, which has already received an enthusiastic reception at the Wairoa Film Festival in New Zealand, harks back to the ‘old days’ of movie-making as it is black and white and silent. Marsters plays the father of central figure Mrs Mokemoke.

“The story is, my son-in-law tries to cheat me and my daughter out of my family farm, and in the end he kills my daughter and tries to kill me, but he dies instead,” he says.

“The film has subtitles and great lighting effects – and, of course, the best actors!

“It had great reviews at the Maori Awards at the Wairoa Film Festival, which was held from May 29 to June 1. We got great feedback, specifically around lighting, the use of silent and film noir conventions and the characters.”

Mrs Mokemoke isn’t Marsters’ first venture into the world of film. He has previously had a bit part in the popular New Zealand television series Outrageous Fortune and has featured on long-running TV series Shortland Street three times.

“Each time I have worked on Shortland Street I have appeared as a dying Samoan man: the first time with a bad heart, the second suffering from cancer and the third time with diabetes, and in a coma. Robby Mangasevea played the doctor attending to me.”

His involvement in the film industry started about 12 years ago when his son, Louis returned to Auckland from Rarotonga and featured on Outrageous Fortune.

“He had no car and I was his transport to the studio or to wherever scenes were being shot out of town. It got me thinking then, ‘man, I could do this’.

“So I signed up with Louis’ agent, Fresh Talent and I got a part on the show as a prison officer.

“And that is how I became involved in the New Zealand film industry. I continued working on and off through my agent, but when the work dried up. I got involved with students who were learning how to make movies at the New Zealand Film Academy at AUT. Mrs Mokemoke is the latest one.”

Marsters says he auditioned for the part on Starnow, a global website for actors and film-makers.

“That is how Tia found me, she rang me and invited me in for an audition and I got the part of the father of Mrs Mokemoke.”

Marsters, who has been semi-retired since 2012, is business manager for Tulele Marsters Ltd, contractors to Auckland City Council waste and recycling management operations.

“We plan to start work on the building on Rarotonga by February next year,” he says.