Blast from the past: The circus came to Rarotonga 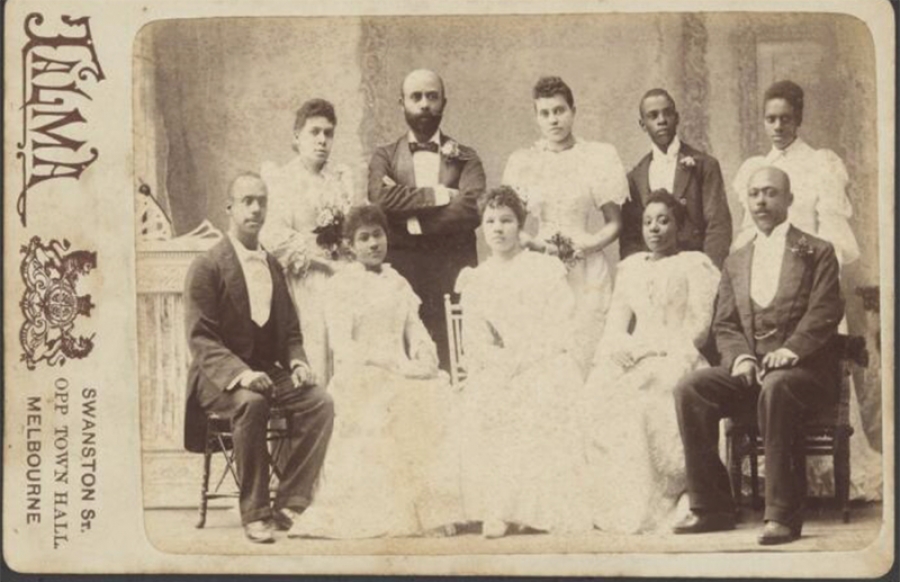 Orpheus M. McAdoo, (front right) leader of the Georgia Minstrels who performed in Rarotonga and Mangaia in 1899. 20101622

Life in Rarotonga in the LMS (London Missionary Society) era wasn’t all work and prayer. Thirty years after its conversion to Christianity, Rarotonga was playing host to some of the biggest names in international showbusiness.

The Alleghanians, were a quartet of popular American vocalists and Swiss bell-ringers, who visited Rarotonga in January 1860 during a four-year world tour.

Rarotonga was not yet a money economy, so concert tickets were paid for in pigs, turkeys, chickens and baskets of fruit and vegetables.

The venue was the Avarua School House (now The Beachcomber) and a grand total of 1961 tickets were sold in return for goods worth $5000 (around $155,000 in today’s money). The Rarotongan population at the time was less than 2500.

The sold-out audience listened politely to the singing but were more interested in the Swiss bells. As the American bass singer James Boulard noted, “it was evident from their looks and actions, that our bells, …62 in number, of all sizes…. up to the size of a large water pail …. really filled their minds with the greatest wonder….”

“After singing two or three pieces, we commenced with the bells, playing a ‘Grand March’. … The audience presented a picture of the widest open-mouthed astonishment, during the performance of this piece, I ever beheld”

In those days it was not the habit in Rarotonga to applaud performances but the missionary Rev. George Gill gave the hint by clapping and “every subsequent piece vocal or instrumental, received the most enthusiastic applause”.

A finale of ‘Rule Brittania’ and ‘God Save The Queen’ on Swiss bells, brought the show to a close, after which one of the Orometua asked the audience to reciprocate with an imene. The first hymn was followed by four others. The Americans then returned to their accommodation at Takamoa.

White women in crinoline dresses and hooped petticoats were still something of a novelty in Rarotonga, and “the women and young girls instantly rushed around (the female vocalist) Miss Carrie Hiffert all eager to clasp her in their arms and rub their noses against hers….After nearly 100 had embraced Miss Hiffert (they had) rubbed the skin completely off one side of her nose….”

Mademoiselle Aeola “the human cartridge” was fired each night from a cannon into the outstretched arms of an aerial acrobat called King Ohmy “who hangs suspended from a trapeze in mid-air.” “The lady enters the mouth of the cannon, her head and arms alone being visible … a fuse is touched and the lady is propelled (29) feet through the air into the arms of Ohmy.” (Nelson Evening Mail, 25 June, 1887).
Ohmy was world famous for his slack rope act (anearly form of bunjee jumping). This involved dropping from the roof of the circus without a safety net (making it appearhe’d slipped) then pulling up short of hitting the ground. The audience shout of “Oh My!” gave him his name.

Two years later, Hamilton’s Circus visited Avarua. The circus troupe comprised clowns and trapeze artists, including nine year old ‘La Petite Estele’, as well as acrobats, jugglers, a contortionist, trick horses, the dashing bareback rider Charles Brillianso, plus Laddie “the highest jumping dog in the world” (who managed to leap nine feet into the air) and Sovereign, the card playing pony. Sovereign played a hand of euchre with members of the audience “and got the best of the deal” (Goulburn Evening Penny, 29 June, 1895). So confident was Sovereign’s trainer, Professor Hyland, of his pupil’s skills that “he will back the quadruped over a biped every time” (The Bendigo Independent, 21 May, 1895).

Charles Brillianso’s bare-back riding act included jumping through hoops with his feet encased in baskets. It was suggested “Mr. Brillianso would – with very little training – develop into a first-class politician.” Sadly, he died in Auckland a year later, aged just 29 (The Truth’s, 21 July 1895).

In September 1895 Bernard’s Circus arrived on Rarotonga on the steamship Richmond (Auckland Star, 27 December, 1895). Their agent, Mr. Bosco Wilson led a troupe of nine circus artists plus trick horses. The Auckland Star reported August 31, 1895, “This is the fourth trip which Mr. Wilson has made to the islands and it certainly speaks well for circus ‘biz’ in those parts.” La Petite Estele returned, this time as ‘Boneless Ethel’the contortionist (NZ Herald May 2, 1896). Laddie “the jumping dog” also made his Rarotongan return.

In 1901 a puppet show arrived, sponsored by the famous Australian St. Leon Circus. Alfred St. Leon recalls – “The marionettes just looked like little people. The natives thought they were little people. One day, one of the watchmen … fell asleep and the natives came in and saw they were worked by strings.” After that there were “no more attendances.”

‘Direct from America’ an African-American musical ensemble, the Georgia Minstrels and Alabama Cake Walkers, led by the famous Orpheus McAdoo visited Rarotonga and Mangaia in 1899 (The Bulletin, Sydney, 5 August 1899). At this time, the population of Mangaia exceeded that of Rarotonga.

On Mangaia, “part of the performance consisted in McAdoo playing cards with a trained dog. According to the laws of Mangaia, playing cards is an offence punishable by law. Judge Meringatangi – a most erratic character there – proceeded against McAdoo and wanted to fine him ten dollars for breaking the law. Fortunately, the Rev. Mr. Cullen, the resident missionary, heard of the matter and very sensibly stopped the proceedings.” (New Zealand Observer and Free Lance, 24 June, 1899). Rumour has it that the principal offender continued to set upmorecard games and, having cleaned out his opposition, ended up in the umu.

The Georgia Minstrels introduced Rarotonga to plantation songs, like “Swanee River” and “My Old Kentucky Home”, as well as the Cakewalk dance (“the latest American, English and Sydney craze”) and Ragtime, a precursor to Jazz.

………….
Finally, in 1904 a group of Samoan acrobats arrived and “gave several performances to large numbers of our native population, but our local friends were not content to allow the Samoans to have their own way. So a (Rarotongan) opposition troupe was put into shape, a brass band was engaged, and for a week or two great rivalry existed: but alas the performance grew stale, and I am told that on the last evening the rivals performed to audiences of four and seven respectively.” (NZ Herald, 1 December, 1904).

Improved shipping links and a severe economic depression in Australia had prompted the influx of performers into the islands. As the economic position of Australia improved, the number of travelling artists declined. Already a new entertainment craze was on the horizon. Circus and vaudeville would quickly be eclipsed in Rarotonga by 'moving pictures'.