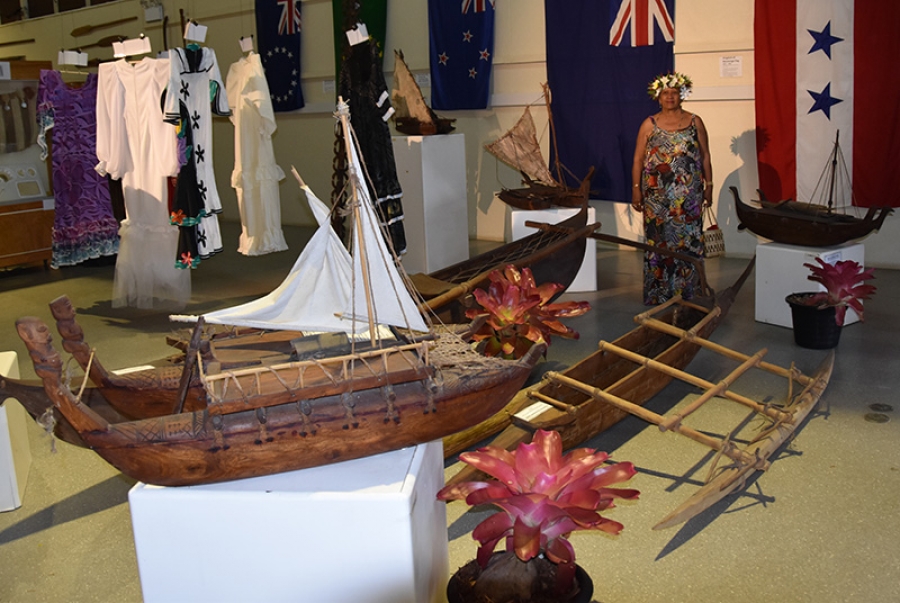 Looking at the artefacts of Vaka Takitumu including its bow, and photographs and paintings of Cook Islands vaka brought him to the realisation that he, too, would like to pay homage to Pa Tuterangi Ariki Sir Tom Davis for launching the renaissance of voyaging in the Cook Islands.

Timoko revealed to guests at the opening that he had first seen Vaka Te Au Tonga on the movie Johnny Lingo on television in New Zealand and it had made a deep impression.

“I thought, “Wow what a beautiful vessel.”

Timoko, who has lived on Rarotonga for 10 years, revealed joining the Voyaging Society six years ago had changed him.

“Voyaging has changed me, as a person…it’s a great job, not an easy one.”

He recalled the devasting fire in September 2017 that destroyed the starboard hull of Vaka Marumaru Atua.

She was restored to her glory in New Zealand with the help of government, supporters and people of the Cook Islands.

The vaka sailed back to Rarotonga earlier this year in June, and has recently returned from Aitutaki.

“We want to share her with the Pa Enua, there will be more visits to the Pa Enua next year.”

Cook Islands National Museum/Runanga Pakau director, Justina Nicholas, said the second section of the exhibition was in partnership with the Voyaging Society.

It shares the history of the revival of the voyaging vaka, and the valued contribution of the late Sir Tom Davis to the country, the formation of the voyaging society, and the launching of Vaka Te Au o Tonga, Vaka Takitumu and Vaka Marumaru Atua, said Nicholas.

Exhibition themes include traditional navigation, the role of the Cook Islands Voyaging Society and the Okeanos Foundation in the Pacific and the historic two-year voyage of Te Mana o Te Moana (The Spirit of the Ocean) from 2010-2012, which culminated with the gifting of Vaka Marumaru Atua to the people of the Cook Islands.

Footage of modern voyaging events and images are also on display.

The photographs will be auctioned in April to raise funds for Marumaru Atua’s planned voyage to Hawaii.

The exhibition runs until June 5 next year.