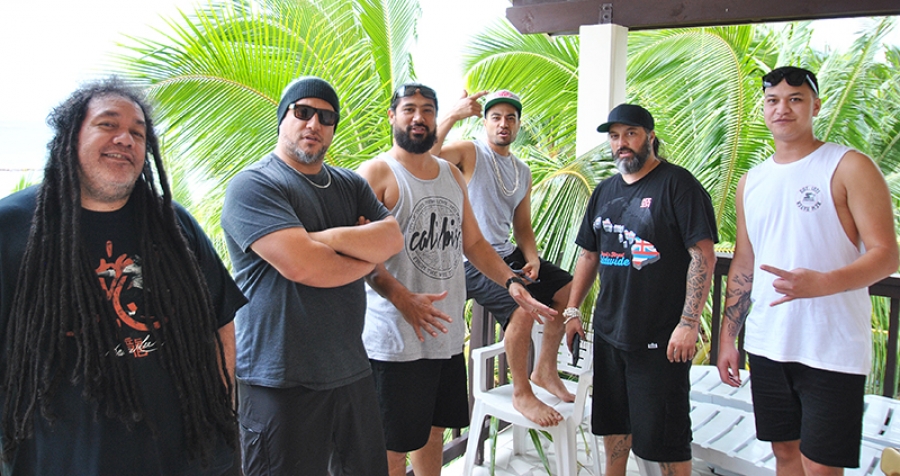 The all Maori band first formed in 1997 and claim “Uncle Bob” is their biggest musical influence.

They admire Marley’s lyricism, political views, and the struggles he overcame on the path to success. Even the band’s name is an ode to Marley’s breakout album ‘Catch a Fire’.

Lead vocalist and rhythm guitarist Logan Bell says the band’s mutual love of music is “the nucleus that pulls the band together”.

“This is what we do for a living. This is how we support our families…. It’s what we love to do.”

Drummer and vocalist Jordan Bell says waking up to a view of the lagoon in Rarotonga is one example of why he loves his job.

“If you can find something that you love to do and make it your work, you’re winning,” says Logan.

However, both admit that being away from their families for extended periods is the hardest aspect of their work.

“We all have families and it’s pretty strenuous on our home life,” says Logan.

“Thank goodness we’ve got some solid foundations at home to allow us to be out here” Jordan adds.

It is only the band’s second performance in the Cook Islands, their last being in August last year.

“I absolutely fell in love with the place the first time we came here” says Logan.

He has strong ties to his genealogy and believes many of his predecessors stopped over in the Cook Islands on their way to New Zealand.

“The Pacific was a highway. We all integrated.”

“South Pacific reggae is pretty much our identity” says Jordan.

“I like to think we’ve been a part of this big revival (of reggae music) here in the South Pacific” he adds.

There’s no big corporate chains or things like that”.

The band has a full schedule of activities while on the island. They are planning on hiking and going on a lagoon cruise, among other things.

The band’s new album, Legacy will be released on June 1. They last released an album in 2013, which was a compilation of their best work.

Jordan says Legacy is some of Katchafire’s best work yet.

The band has collaborated with Grammy award winning artists and producers for the album.

“We’re really excited to bring some new material after six, nearly seven years of touring. We’re excited to share this chapter of our legacy. We’ve had to record it while we’ve been on the road, so it’s got that worldly, eclectic sound” says Jordan.

“We’ve grown a lot as individuals, men, husbands, brothers, and as fathers over the last several years. I hope that comes through in the music. We’re about quality, not quantity” says Logan.

The band has been practising a new set which they will perform tonight. The set includes some new songs, which they are yet to play live.

“It’s definitely going to be a funky reggae party. We’re going to get you singing and dancing. If that’s not enough, Logan can always strip down to his undies,” jokes Jordan.

The show begins tonight at 8pm at the Rehab Nightclub in Avarua. There is a limited number of tickets left, so get in quick.

Rehab Nightclub and Reefside will be selling tickets until 4pm today.

There will also be door sales beginning at $70.00 for general admission.

Stan Walker is opening the show with Katchafire, beginning at 9pm.