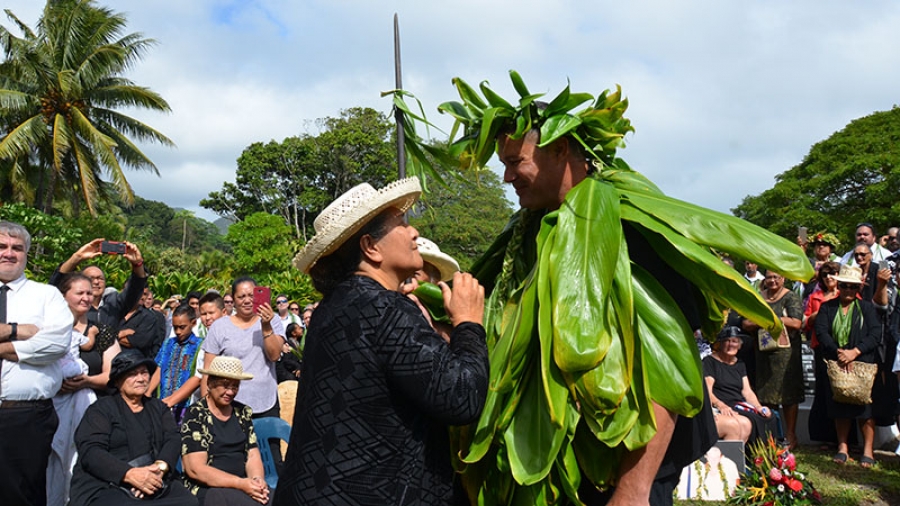 And immediately afterwards, witnessed by hundreds of people who attended the funeral pay their respects, his son Makea Vakatini Phillip Ngamatoa Ariki was invested as his successor.

It has been many years since a deceased Ariki is laid to rest, then the new Ariki invested at the same time at the burial ground.

Although it was difficult to say goodbye to his father, Makea Vakatini Phillip Ngamatoa Ariki was humbled and appreciative to be bestowed the honour of chief of Ngati Vakatini.

Te Ara Rangatira Mark Brown cut off the head of the pig and offered the ear to the new Ariki to bite, a tradition that was performed effortlessly.

Brown said Ngati Vakatini wanted to bring back that tradition: “This was done through the kopu Ariki, we want to show the rest of the Matakeinanga and the Ui Ariki that this is how Vakatini had planned their succession, and to demonstrate that this is the way we have set it, for future generations as well.”

That meant not just waiting until somebody dies, but setting in place the succession, to plan who will take over so that next in line will automatically come up to assume the role when the title holder passes on.

At the investiture, Poko Henry from Te Ora Rangatira protested at not being included in the decision-making.

Brown acknowledged her objection – that they were putting their voice forward about not being included.

But he said they had yet to invest their own Te Ora Rangatira, and their delay had been because they were divided.

It was up to them to look amongst themselves to who will carry the Teora Rangatira title, and when they do then they can join in the family meetings, Brown added.