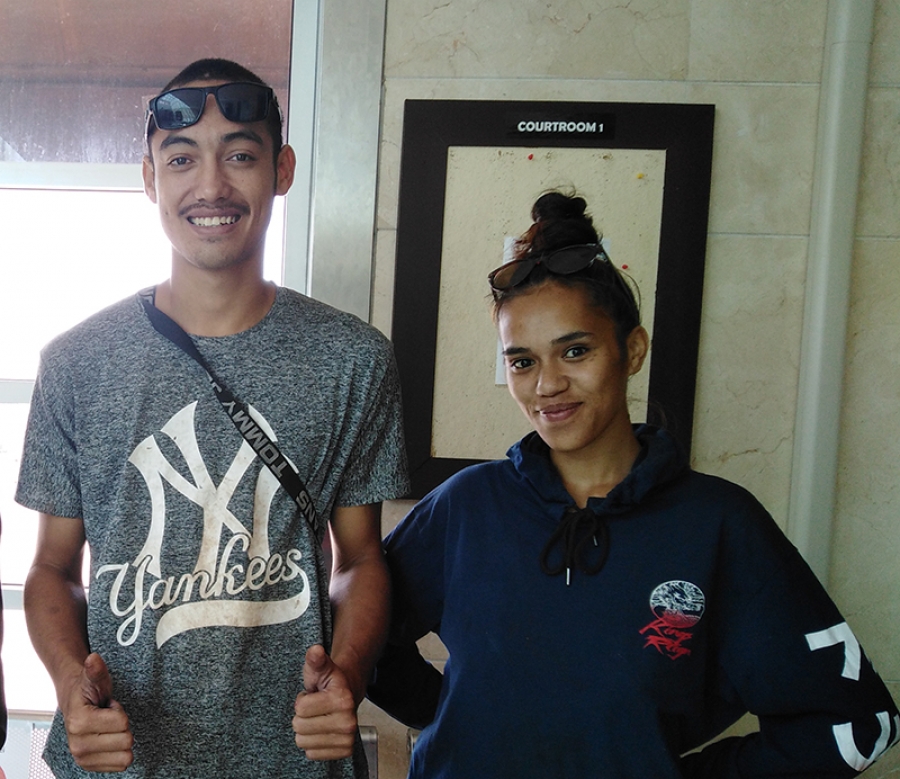 Theft charges involving just a sack of lemons have raised a bigger question: what happens if people steal to feed themselves in tough times?

Justices of the Peace have cleared a young couple accused of stealing 10kg of lemons – but say it’s because they were interrupted before they had a chance.

JPs Carmen Temata, Georgina Williams and Bernice Manarangi said there was not enough evidence for a conviction.

A smiling Jonathan Bailey and girlfriend Naomi Ann Holmes welcomed the not guilty verdict in the High Court yesterday.

“Thanks to the Lord,” said Bailey.

“Thank you to our lawyer, for helping us win our case,” said Holmes.

Defence lawyer Andrew Ahsin said he hoped to not see the couple in court again.

* Going back to basics

“For trials, everyone has the right to be presumed innocent until proven guilty,” he said. “They had their trial and I always believe that the truth will either set you free or come back and bite you, at the end of the day, God has the final say.”

The same day, another man Mataora Ngametua was convicted of stealing assorted foods including milk, butter, mincemeat, lamb chops and sausages, as well as two cartons of cigarettes. He said he was suffering hardship.

Chris Denny, director of Cook Islands Security, warned that as times get tougher, produce will more often be a target of theft. “And you will see locals organising themselves to protect their crops,” he said. “

“Anything not bolted down will start to go missing soon, guaranteed. We all have to be vigilant to protect what is ours.”

Police spokesperson Trevor Pitt said Rarotonga had ongoing issues with the theft of crops, such as bananas, taro, and citrus – even without the threat of a pandemic.

“Some people say there's no excuse to go hungry here,” he said. “Food security is more likely to be threatened if there was a major disaster, especially in the outer islands. Rarotonga tends to have fairly secure lifelines.

“Right now I don't see a high risk of produce theft. But unfortunately gone are the old days when you could trust everybody.”

Bailey and Holmes were accused of the lemon thefts before the Covid-19 crisis bit.

Bailey was accused of unlawfully taking the lemons from a Wigmore farm in Titikaveka, and Holmes charged with helping him, on October 6 last year. But the court heard they had been supplied the lemons from a garden in Ngatangiia.

When a worker confronted them at Wigmore Farms, they had been there just minutes. They were parked up there so their relationship would not be discovered by Holmes’ uncle, they claimed.

JP Williams said it was believable that the lemons in the sack were picked from somewhere else – but it was highly likely they did plan to pick lemons at the Wigmore farms as the farm employee sighted Bailey’s shoes under the lemon tree.

It was probably only the arrival of the employee that stopped them from taking lemons, she said.

In the High Court, JP Williams said they were dealing with circumstantial evidence in the lemons case.

The defendants did not deny they were discovered parked in the lemon plantation but they said they parked at the plantation so their relationship would not be discovered by Holmes’ uncle, in the Napa family.

Holmes said she was heading to her uncle’s place to pick up her shoes.

They said the lemons in the sack were not picked from the Wigmore plantation but from Ngatangiia, and they were in the plantation for less than a minute when an employee of Arama Wigmore approached them – this was too short a time for the two to be able to pick 10kgs of lemons.

In reviewing the police statement it was clear that the two defendants did not cooperate and Bailey even denied being in the plantation.

However, the couple were consistent that they were there to retrieve shoes from the Napa home, and they were in the plantation for less than a minute and the lemons in the sack were not from the Wigmore farm.

JP Williams said the Wigmore employee said he approached the defendants not long after he saw them drive into the plantation, in fewer than five minutes. The employee acknowledged he did not see them pick the lemons.

In the absence of the evidence of the lemons, they were persuaded that intention of the accused was twofold: to retrieve Holmes’ shoes, as well as take the lemons.

It was unfortunate that no photographs of the lemons were produced by the police –and according to the constable who handled the matter, she had no idea what happened to the lemons.