The Irish make their own luck 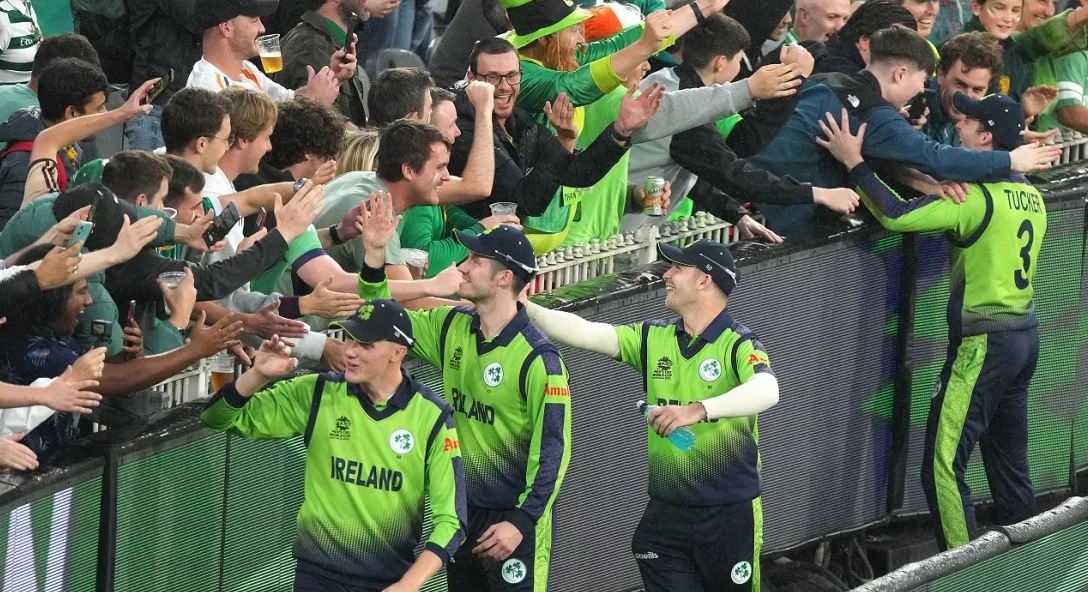 Ireland players celebrate their victory with their fans. CRICINFO/22102606

Day five of the T20 World Cup Super 12 stage saw the biggest upset of the tournament so far with Ireland beating tournament favourites England by 5 runs in a rain affected match. The game between New Zealand and Afghanistan was abandoned without a single ball being bowled due to some wet and miserable Melbourne weather. Analyst Rahul Patil looks back at all the action from Australia.

England vs Ireland - England won the toss and bowled first.

There is a saying that ‘fortune favours the bold’ and Ireland were definitely the bolder team in their game against England. Put in to bat first Ireland, for three quarters of their innings dominated the England bowling and looked set to finish with a total in excess of 175. But from 132 for 3 in the 16th over they lost 7 wickets for 25 runs to be bowled out for 157 in the 20th over.

Andy Balbirnie top scored with a captain’s knock of 62. For England Mark Wood bowled with pace and aggression but was also wayward at times. Liam Livingstone was the pick of the bowlers picking up 3 wickets for 17 in his 3 overs of spin.

Although they would have been disappointed with their final total, Ireland came out with some real intent in the field and picked up 3 quick wickets which resulted in a slow and cautious start for England. They consolidated for a while through Harry Brook and Moeen Ali and were just beginning to press the foot on the accelerator when the rain arrived and the game had to be called off. At that time England were 5 runs short of the DLS par score which meant Ireland were declared winners and awarded the crucial two points.

New Zealand vs Afghanistan - Match abandoned without a ball bowled.

After losing their first game to England, Afghanistan were really keen to get on the park and have a shot at causing an upset. The weather gods though had different plans and they had to split the points with New Zealand.

Both the above results really open up Group 1. New Zealand still sit at the top of the table with 3 points followed by 4 teams, all with 2 points and only separated by their respective net run rates. Australia will probably be the happiest with the Ireland vs England result as it makes their chances of making it to the semis more realistic.