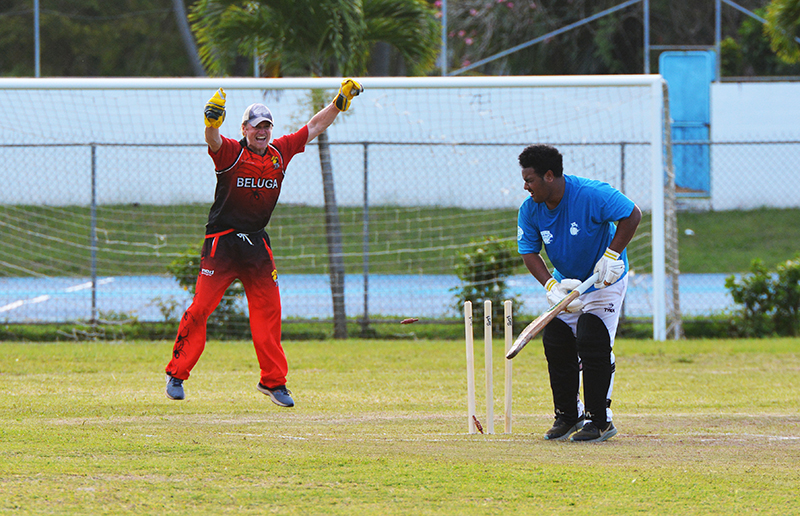 Arorangi men’s side maintained their unbeaten run in the Rarotonga Cricket Club competition after a hard-fought win at Raemaru Park on Saturday.

In the match of the round, the Tupapa K-11 side took on the mighty Arorangi Redbacks in a bid to create an upset by disrupting the latter’s unbeaten run in the weekly competition.

The home side batted first and scored 160 runs, thanks to a superb 42 run from Dan Simpson who top scored for Arorangi.

In reply, Tupapa K-11 started the run chase well with their top four batsmen scoring 112 runs between them.

It was a masterclass batting display from Richard Davey hitting the Arorangi bowlers to all corner of Raemaru Park, scoring a quick 52 runs that swung the game in Tupapa K-11’s favour.

However a batting collapse from number five to 11 including the likes of veterans Ray Roumanu and Davis Teinaki and some brilliant bowling and fielding from the hosts gave back the game to Arorangi.

Tupapa K-11 lost to Arorangi in the last over after being bowled all out for 152 runs with only eight runs short of the Arorangi total.

In the other men’s match, Muri defeated former champions Matavera by three wickets.

Matavera batted first and scored a decent total of 130 runs. Tom Buckley was their top scorer with 64 runs.

In reply, Muri had to work harder for their runs and managed to reach the Matavera total in the 15th over.  Yet again Muri allrounder Pakia Wichman showcased his batting prowess top scoring with 54 runs.

Turangi batted first and scored 191 runs from their 2 0overs. Top hitter Richard Piakura managed 74 runs. In reply, Tupapa were bowled all out for 106 runs.  Turangi won the match by 85runs.

Teinaki said: “Arorangi and Turangi haven’t lost a game yet but they will be playing this weekend to decide who will be top in the men’s points table with one more round to go. Nikao has cemented their third spot winning against TKV. Tupapa K-11 and Muri will be battling for a spot in the top four.”

In the women’s competition over the weekend, Muri defeated defending champions Matavera by seven wickets.

Matavera batted first and managed only 75 runs before losing all their wickets.  Tina Mato top scored with 24 runs.

Pick of the bowlers for Muri was Lina Taufahema who managed four wickets and a maiden in the 2.3 overs she bowled. She only conceded seven runs.

In reply, Muri eased through their run chase reaching the Matavera total in the 12th overs. Daena Kataina top scored with 29 runs.

Nikao won their match against TKV, the result of Tupapa versus Turangi was not available.