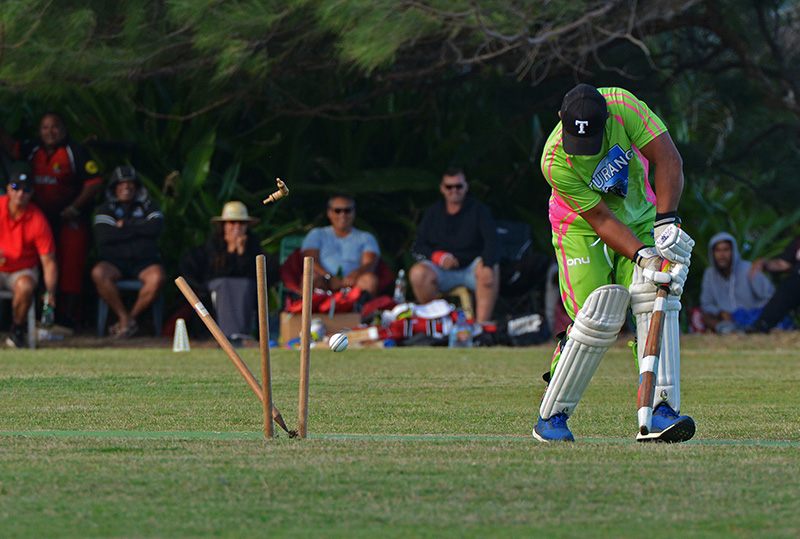 A Turangi batsman is out for a duck against Arorangi Redbacks (bowled by Tomasi Vanuarua) at Turangi Oval on Saturday. RASHNEEL KUMAR/ 21102624.

Arorangi Redbacks finished on top of the Rarotonga Cricket Club men’s competition after a massive win in the top of the table clash over the weekend.

In the final round of the weekly club competition, the Redbacks were hosted by the previously unbeaten and defending champions Turangi on Saturday.

The match was to decide who tops the men’s competition heading into the knockout rounds, starting this Saturday.

The Redbacks batted first with openers Glenn Hori Miller and Shane Munokoa setting a good pace but were bowled out in the first four overs after hitting 14 and 25 runs, respectively.

Dan Simpson, who completed the Redbacks’ top order, put in a man of the match performance after smashing 127 runs from 46 balls that included 15 fours and eight sixes.

Simpson was well supported by lower middle order batsman Tomasi Vanuarua, who scored a quick 71 runs, amassing a mammoth 290 runs for Turangi to chase in the second inning.

After some heated exchange over who should be umpiring the second inning, Turangi started their chase but the total seemed too much to handle especially with the loss of their top order batsman, who went out for a duck.

The hosts managed to score 183 runs from their 20 overs, handing the Redbacks a well-deserved 107-run win.

The two teams will meet again this Saturday in the top two qualifiers with the winner heading straight into the final and loser playing the winner of 3rd/4th playoff match in next week’s semi-final.

Against TKV, Muri batted first and scored 124 runs. Daena Kataina top scored with 33 runs, followed closely by Phillica Maruariki on 32 runs. In reply, a great inning from Vasi Poila of 41 runs gave TKV the upper hand in their run chase. However she didn’t had any support from her batting teammate as they succumbed to another defeat. Muri won the match by 35 runs.

The scorecards of other matches were not available.