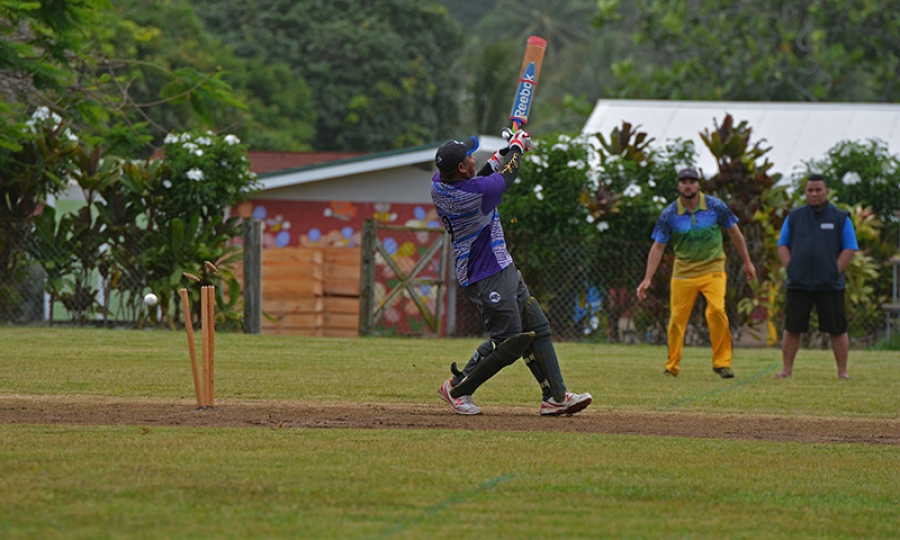 Tupapa loses a wicket against Matavera in the men's final on Saturday last week. 19120805

Cook Islands Cricket eyes grassroots development in a bid to improve the profile of the sport in the country.

The future of cricket in Rarotonga is in good hands, says the Cook Islands Cricket chief executive officer Davis Teinaki.

Teinaki said the 2019 season which ended last week was one of the best, bringing out top performances from a good mix of young and experienced players.

Teinaki said a number of teams fielded younger players building them up for future local and international competitions.

“Most of the teams playing in our competition have young players in their playing team which is a good sign for the game as we targeted younger players to play our game.”

The 2019 season ended on Saturday with an exciting battle in the men’s and women’s finals.

Matavera claimed a historic win after becoming the first team in the competition to win both titles. The teams also finished the domestic competition unbeaten.

In the women’s final, Matavera played Turangi with the latter batting first, managing only 65 runs.

In reply, an experienced Matavera side reached the target in nine overs after losing four wickets to record a six wicket win.

In the men’s final, Matavera batted first and managed a massive 227 runs for six from their 20 overs.

Rain halted play at Matavera Cricket Ground and hesitant Tupapa, who complained about poor pitch, returned only to score 128 runs before losing all their wickets with four overs remaining.

Davis Teinaki said in the women’s competition, Matavera were the team to beat after a dominant performance throughout this season.

Undefeated through the round robin, he said the side set a new benchmark by winning the title for second year in a row.

“All in all, the women’s competition is more competitive nowadays and the skill levels that they have is of high quality of playing cricket,” Teinaki said.

In the men’s competition, Tupapa has been the most dominant side for many years.

Recently, Teinaki said they have seen the rise of the Turangi side winning the title in last few years.

“This year Matavera really surprised many people by becoming the champion of champions in the men’s competition finishing undefeated.

“This is good for the game, a good implication that game’s knowledge has been pass on to other clubs and the younger generation.”

Teinaki said the Rarotonga cricket competition was not all about intense matches.

It was also an opportunity for local players to enjoy and have a bit of fun while battling it out for top runs and wickets on the pitch.

“Cricket is the only game where you have a grandfather, father and a son playing in one team. That’s the beauty of it. But if we look at the competitive side of things, that’s where development and high performance comes in,” Teinaki said.

“Although being competitive and winning is important but I’m all about clubs or teams having fun and enjoy playing cricket.”

However, Teinaki said their holistic approach was based on the development of the sport from the grassroots level.

“That comes with a lot of hard work, funding and volunteers just to mention a few things. The future of cricket really is to establish some kind of junior development programme at the school level and create some competition for the kids to enjoy and learn more about the game of cricket.

“But for these things to happen first and foremost funding is very crucial to push and support whatever programme you need to establish. No money, no business.

“Secondly a support group is needed to implement and assist in whatever way possible. The future of cricket is gradually moving forward to where it is needed to be. A few more years of hard work will get us there.”