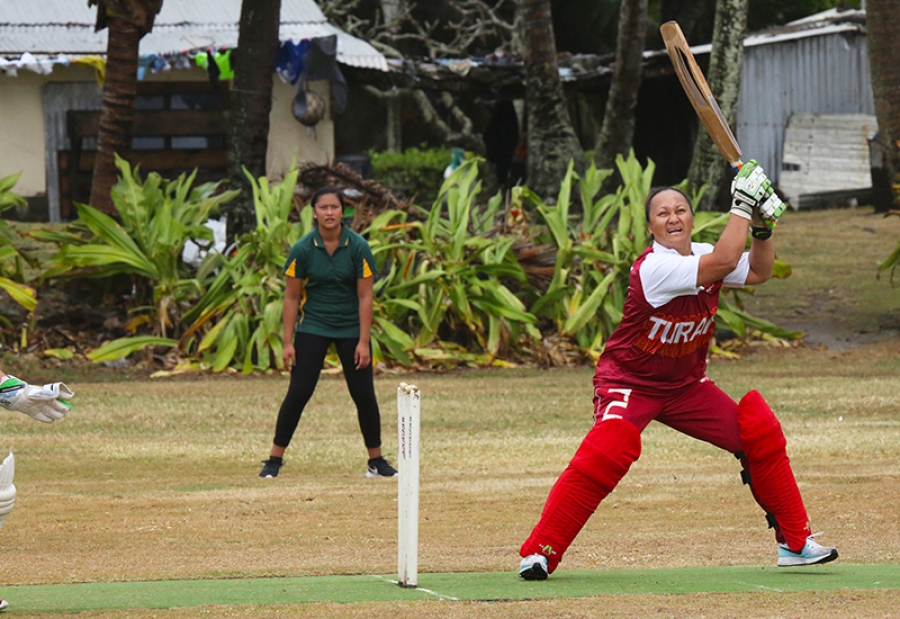 June George of Turangi cracks away a skywards shot and watches to see where it lands in the 2018 competition. She scored her second century om Saturday. 18092515

Turangi’s June George became the first female cricketer to score two centuries after smashing 121 runs – including 10 sixes – against Avana in the opening round of the women’s competition on Saturday.

Her feat was followed by another milestone achievement – Turangi batsman David Piakura blasting a 36-run over, a first in the local competition – against Avana men’s side.

George, who scored her first century in 2016, is the second female cricketer to score more than 100 runs.

Punanga Kaveao holds the record for the highest run scorer in women’s competition after hitting 138 runs in 2016.

George said: “It feels good to start the season on a high. We always go into the match hoping to score centuries but it’s no easy feat. The plan is to stay in the field as long as you can.”

“I hope this will inspire other female cricketers to step up and believe that they can also achieve such feats. There are some women out there who can really hit, they just need to find their day I guess.”

George’s 121 runs not out and Teremoana More’s 73 helped Turangi amass 218 runs in 20 overs with a wicket down.

In reply Avana managed 134 runs for five in 20 overs, giving Turangi an 84-run win. Grace Rea was the top scorer for Avana after hitting 52 runs.

Turangi’s Josephine Maoate was impressive with her bowling after picking three wickets from four overs. She conceded 27 runs.

In the men’s match, the undefeated Turangi ran rampant after scoring 309 runs in the opening inning.

Opener Vane Tangimetua Jr fell short of his first century this season after scoring 96 runs. Tutu Tangimetua scored 72 while David Piakura smashed 71 runs, including the historic 36 runs in an over.

In reply, Avana managed only 72 runs.

The unbeaten Turangi leads the men’s competition after beating Arorangi and Takuvaine in their earlier matches.

Meanwhile the Rarotonga team for the end of the year Mangaia tour has been named. The selected players are requested to attend their first training session this afternoon at 4pm at Turangi Oval.