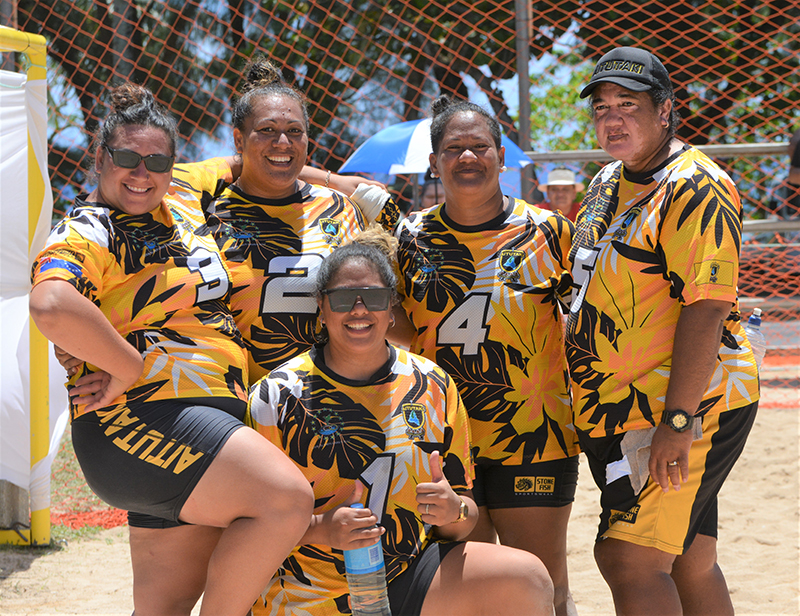 Happy ladies of Team Aitutaki despite missing out the bronze medal in the Open Women’s beach volleyball semi-final. 22101437

Football and cycling will bring down the curtain to the 2022 Cook Islands Games this afternoon.

All sports for the Cook Islands Games wrapped up yesterday except for the football finals and cycling codes which will take place today.

Full results were not available when this edition went to press last night. Cook Islands Sports and National Olympic Committee yesterday said: “To keep things interesting the medal tally will not be updated till after the closing ceremony. Islands are still making moves and we want the final results to be a bit of a surprise.”

There were thrilling netball games at the National Indoor Arena in the finals yesterday. Team Rarotonga defeated Aitutaki to win the U14 and take home the gold.

In the women’s and men’s beach volleyball, both Pukapuka teams claimed the gold medals. Rarotonga settled for silver and Palmerston managed bronze in women’s while in men’s Atiu managed silver and Rarotonga claimed bronze medal.

Team Mangaia is tipped to claim the overall title after leading the medal tallies in all divisions as of Thursday.

Mangaia fielded one of the biggest teams in the Games competing in all codes.

Team secretary Annie Kauvarevai said: “Our overall aim was to bring all our families together, not everyone is able to come together for functions so we thought to use this Games as a way to bring our people together as one big family. We are happy to have achieved that.”

“Our aim was to focus on all divisions from masters aged 45 to 70 and 80 years and our youth. We also had some youth reps playing in opens division.”

Kauvarevai said while they were favourites to claim the title, they will wait for the final announcement tonight.

“Whatever results come, we are happy,” she said.

“We have a combined church service on Sunday at 10am at Avarua Church and our wrap up at Edgewater Resort from 1pm to 4.30pm.

“We would like to thank all our supporters and managers from here, Pa Enua, New Zealand, Australia and abroad on behalf of our head Numangatini Ariki.