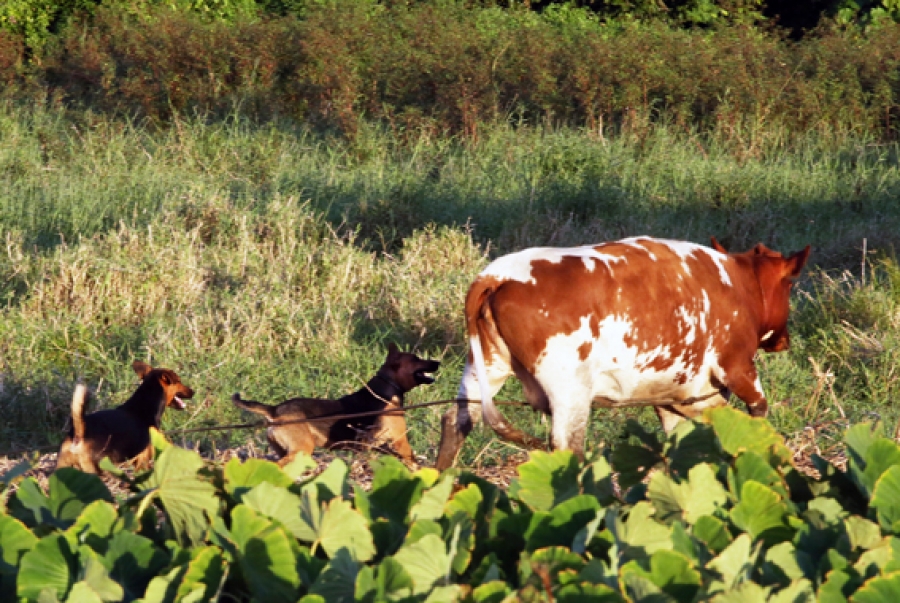 Roaming dogs attack a cow tethered in swampland by the airport runway in 2017. FILE PHOTO/17051501

While an animal desexing programme designed to tackle dog issues on the island looks set to continue amid ongoing problems in getting the matter under control, two separate incidents over the long weekend have added pressure.

On Friday, a goat was reported to have been attacked by three dogs at Black Rock while a tourist was reportedly bitten by a dog while riding a motorcycle through Tutakimoa on Sunday.

“In terms of the dog attack incidents, the (dog) owners were identified,” police spokesman Trevor Pitt said on Monday.

“So far, only the dog versus tourist case has been resolved, we need to speak to the other owner.

“I’m told the dog cases are still being dealt with today (Monday).”

Te Are Manu Vet Clinic, under the umbrella of the Dog Registration and Animal Control Committee, completed its second round of desexing clinics on the island – 20 in total across the punas, last week.

An estimated 350 dogs have been desexed across the 20 clinics, of those 150 were females. The service is free of charge.

On Wednesday, committee member Christian Mani said continuity of the programme is an effective way of managing the dog population on the island.

The weekend’s reported incidents started off with the arrest of a woman late Thursday afternoon, following a complaint of a dangerous driver, who appeared intoxicated.

When detained at Tupapa, the woman became abusive and uncooperative, police reported.

She was arrested and charged with drunken behaviour and using profanity then remanded into jail.

She was then bailed on Friday to appear in court this coming Thursday.

A blood specimen was also sought for analysis.

There were multiple noise complaints on the nights of Thursday, Friday, and Saturday.

Pitt said: “In some cases these did not require any intervention as they had been wound up by the time officers got there.”

Other road incidents included one report on Friday of a dangerous driver, allegedly a tourist on a motorcycle, at Papaaroa.

Two youths on a motorcycle were stopped by police on Friday, and one person was forbidden from driving late Saturday night.