CHURCH TALK: You shall be my witnesses 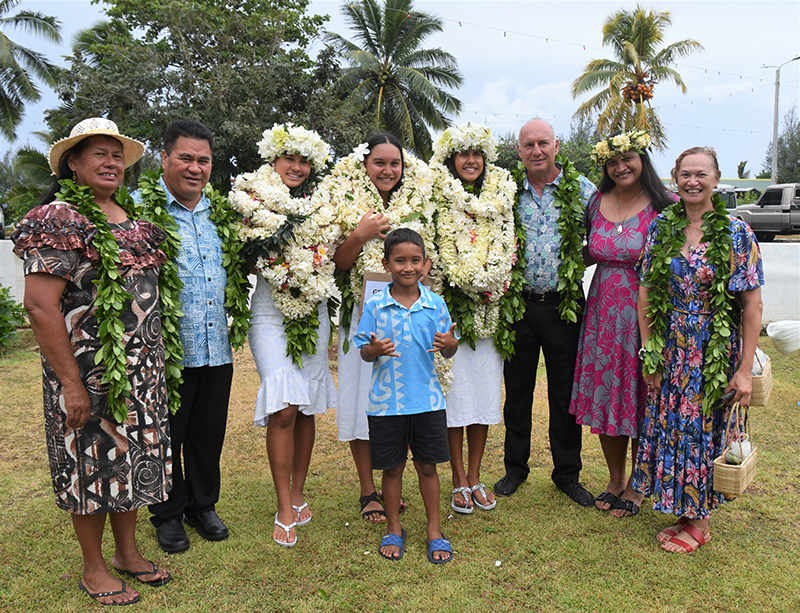 Kubethreana Taripo, Teremoana Macquarie and Teuraarii Macquarie who received the sacrament of confirmation on Sunday last week, with their families. MELINA ETCHES/22102412

Last Sunday in our Cathedral Church in Avarua, 11 youth together with an adult received the sacrament of confirmation. The ceremony consisted of three parts, writes Bishop Paul Donoghue of the Catholic Church.

The first required the candidates to publicly renew their baptismal promises, stating that they rejected Satan and all his works. Then I as Bishop called down the Holy Spirit upon the candidates. And the third part was the anointing with oil, showing that the candidate is strengthened to witness to God’s love and might in word and deed. I ended by offering the candidates the peace of Christ. The overall aim for the candidate in this ceremony was to complete the initiation that first occurred at their baptism; then when they made their first communion, and now being initiated responsible member of the church at confirmation.

In this article, it is my aim to elaborate on what is involved in being a responsible and a fully-fledged member of a church and what it means to witness to God’s love. How are we, the disciples of Jesus Christ, expected to be Christ’s witnesses to the ends of the earth with the help of the Holy Spirit in the year 2022 and beyond?

Each baptised person is called to a mission in the church. Consequently, mission is carried out together, not individually, in unity with all the church’s community, and not on one’s own initiative. The witnessing of Christians to Christ is first of all communitarian in nature. Hence, in carrying out the mission, the presence of a community regardless of size is important.

In preaching the Word of God, the example of the Christian life and the proclamation of Christ are inseparable. One is at the service of the other. They are the two lungs with which any community must breathe if it is to be missionary.

In telling his disciples to be witnesses, the risen Lord also tells them where they are being sent. “Not only in Jerusalem, but throughout Judaea and Samaria and indeed to the ends of the earth.” Acts 1: 8 Here we clearly see the universal character of the disciples’ mission. The disciples are sent not to proselytise but to proclaim the good news. The Acts of the Apostles speak of the missionary expansion, and provide a striking image of the Church “going forth” in fidelity to her call to bear witness to Christ the Lord, and guided by divine providence in the concrete conditions of her life. When persecuted in Jerusalem, the early Christians then spread out through Judaea and Samaria bearing witness to Jesus everywhere. (Acts 8:1, 4).

Something similar still happens in our own day. Due to religious persecution and situations of war and violence, many Christians are forced to flee from their homeland to other countries. As I write this, I hear on BBC News that Russia is warning Europe to expect more refugees from Ukraine as winter sets in. On our part, we are grateful to those countries that don’t remain locked in their own hardships but bear witness to Christ and to the love of God and are open to accepting refugees.

Signs of the time

More and more, we are seeing the presence of various nationalities now enriching the make-up of church membership. It was clear for everyone to see in the nationalities of those making confirmation on Sunday – Cook Islanders, a Fijian, Filipinos and a Samoan. This fact was highlighted by the Prime Minister in his speech on the closing night of the Cook Island Games. His point was that the recent granting of permanent residence was reflected in those competing in the games. Surely this is a reminder to all our churches in the Cook Islands that the pastoral care of migrants should be valued as an important missionary activity that can help the local faithful to rediscover the joy of the Christian faith they have received.

When the risen Christ commissioned the disciples to be his witnesses, he also promised them the grace needed for this responsibility. “You shall receive the power when the Holy Spirit has come upon you; and you shall be my witnesses.” (Acts 1:8)

Two days ago, we had the public holiday for Gospel Day on Rarotonga. Next year Rarotonga will be celebrating 200 years of the arrival of the Gospel on the island. One might say that when the Gospel arrived on the islands of the Cook Islands it had reached the ends of the world. One could conclude that the work of the Holy Spirit was thus ended. As we look at our current membership, we note the empty seats of members who no longer bother about the Gospel in their lives. The Gospel is considered irrelevant. Some today use the argument that they can practise their religion at home by themselves. I mentioned at the beginning that our witnessing is for the sake of the community.  If we are at home by ourselves, we are not witnessing. We are no longer missionary.

As I stood before the candidates for confirmation on Sunday, I asked myself if anything has changed since I made my own confirmation sixty years ago. For one, I don’t think the small farming community in the south Waikato where I grew up would have been too different to living in a village in the Cook Islands in the sixties. Each day we saw the same neighbours. We knew everyone we were going to school with, who we were playing sport with. There were no strangers; no foreign workers; no aliens. The only exception would have been our fathers, who had all been to war in Europe or in the Pacific and had their eyes open to another side of humanity. A darker side that these men were not prepared to talk about, even with their wives.

The world of 2022 is a hugely different place from the world of the 60s. With the internet, the youth of today live in a world where there is easy access to a multitude of points of view politically, morally and culturally – religious beliefs that now extend to non-Christian religions, music and art that bombard them with promises of happiness and true love. For our candidates to say publicly that they believe in God, his only Son Jesus Christ and the Holy Spirit is indeed a challenge. Previously it was taken for granted that children would continue in the religion of their parents. But that is not the reality today. More than ever, our youth need an advocate to reveal the truth to their minds and to keep their feet rooted to rock and not sand.

“I have said these things while still with you; but the Advocate the Holy Spirit, whom the Father will send in my name, will teach you everything and remind you of all I have said to you. Peace, I bequeath to you, my own peace I give you, a peace the world cannot give, this is my gift to you. Do not let your hearts be troubled or afraid.” John 14: 25 – 27.