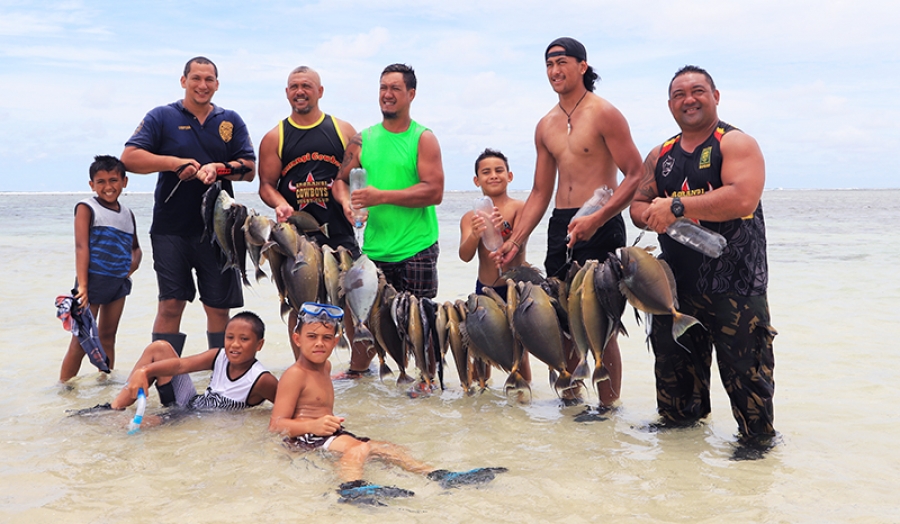 The Marine Resource Bill aims to provide sustainable use of the living marine resources in and around the Cook Islands. This photo of a happy bunch of local fishers was taken in Vaimaanga in January this year.

Further delays are expected in the passing of both the Crimes Bill 2017 and the Marine Resources Bill 2017.

The select committee dealing with these important bills has put its work on hold in preparation for the General Election on June 4.

The Crimes Bill and the Marine Resources Bill have been put before the committee for public consultation. The final decision regarding these bills will be made in parliament based on the committee’s report

Committee chairman Mona Ioane said work on the bills had been put on hold to allow the MPs time to prepare for the elections.

The remaining public consultations on both bills depended on who was elected to Parliament at the June election, he said.

“The current committee’s ongoing work on the bills will be determined by which of the committee members get voted in for the next term. It will also depend on the government which is formed after these elections.

“If there is a new committee then we will have to present them with a progress report from the consultations we have held so far, to allow work on the bills to continue.”

Ioane said they had completed most of the consultations on the Crimes Bill which will modernise the Crimes Act 1969 – the legislation currently followed by the Cook Islands justice system.

Most of the consultations on the Marine Resources Bill, which is aimed at providing sustainable use of the living marine resources in and around the Cook Islands for the benefit of the people, have also completed.

“For the Marine Resources Bill, we have covered Rarotonga and other southern group islands except Mangaia. We were supposed to travel to Mangaia in the same week the elections was announced,” Ioane said.

“About three weeks ago, we visited the islands of Mauke, Atiu and Mitiaro where we consulted public on both the Crimes Bill and the Marine Resources Bill.

“The turnout was great and we are also pleased with the feedback we received from our people on these islands.”

The committee visited Aitutaki a fortnight ago to present the Marine Resources Bill and held two meetings on the island.

“Again, the turnout was good and there were lot of suggestions given to the committee by those in attendance.”

Ioane said the future of the select committee and the bills would be determined by the parliament sitting after the elections on June 14.