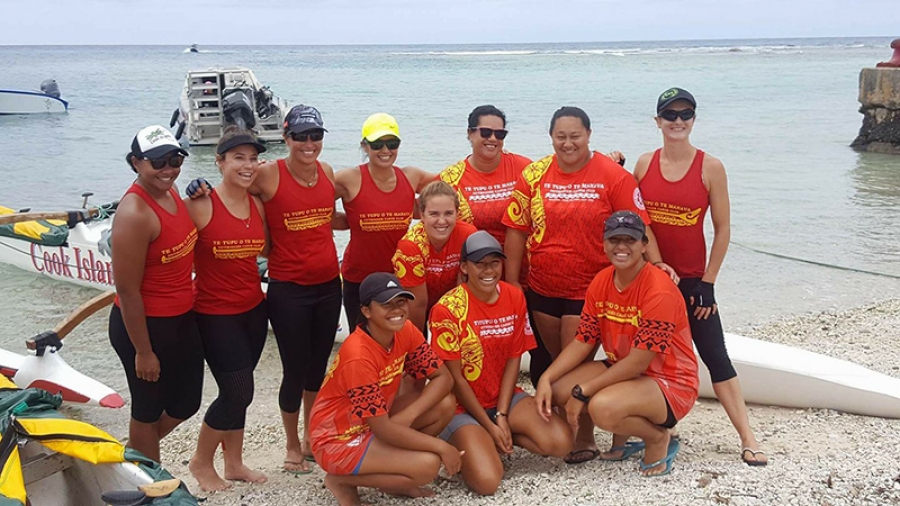 Members of the Te Tupu o Te Manava open women's team which is led by their new member Serena Hunter, third from the left. 17111638

Top female paddler Serena Hunter has made a switch to Te Tupu o Te Manava open women’s team ahead of this year’s Matson Vaka Eiva which starts next week.

Hunter has boosted the campaign of the women in red by taking up the reins as the team’s coach/paddler.

She was part of the Ngakau Toa team and featured for the side in the past Vaka Eiva and other domestic and international events.

Joining Hunter in her new team is Lotu Vea and Paulina Beddoes who have also made the switch this year.

The crew also includes talented youngsters Kimi Tangirere (16 years), and sisters Tevai (16) and Mahea Samuel (15), who were excited to paddle in their first-ever Round Rarotonga National Relay last week Saturday.

The three junior paddlers were also part of the junior Cook Islands V6 crew who competed in the Tahiti World Champs in July. Hunter said she was enjoying paddling with the awesome group of paddlers in her new team.

“We’ve just had two months of training together towards Vaka Eiva, so we’ve had some good intense catchup sessions, but I’m really happy with how all the girls have stepped up to the job,” Hunter said.

“It’s so great to have paddlers return to the sport, and there’s great potential in the crew especially with the young ones.

“There’s not many 16 year olds who would be spending their Saturday mornings doing two hour plus training sessions on the water!

“Tevai steered us most of the way around the island in the November Round Raro nationals, and Kimi is proving herself a very capable stroker, and Mahea is outstanding as our youngest paddler.”

Te Tupu’s senior masters women’s crew have been joining the open women teams in their training sessions too.

Meanwhile, Ngakau Toa also won the men’s race in the Round Rarotonga Relay after clocking 2 hours 46:38 minutes ahead of Te Tupu who finished the race in 2 hours 47:29 minutes.