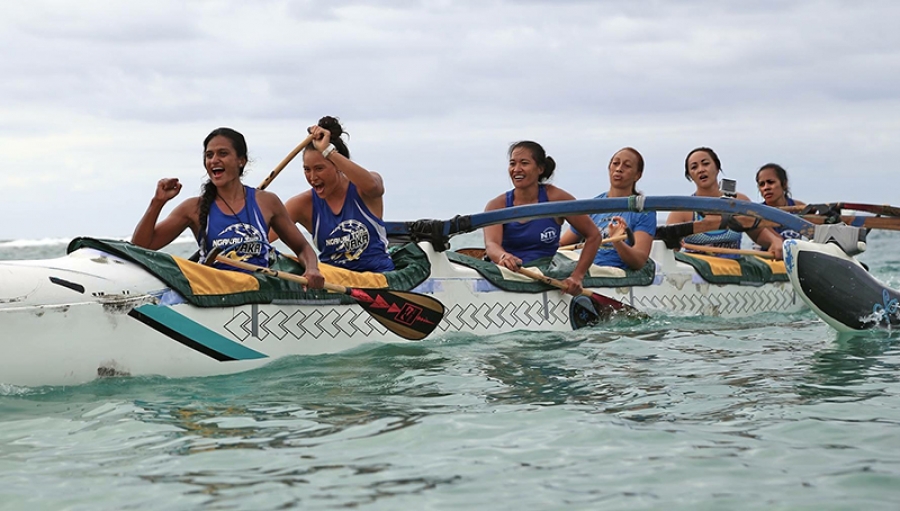 Ngakau Toa Vaka women's team will be hoping to replicate their past success at this year's Vaka Eiva. 17112439

The threat of wind and rain for next week’s forecast is certainly not dampening the spirits of the Ngakau Toa Vaka paddlers.

The local club remains energised and eager to get out on the water for the first of the Vaka Eiva races being held today, fielding teams in the 18km Iron fleet.

Having been gearing up all year for Vaka Eiva during the local race calendar against rival club Te Tupu O te Manava combined with Live Free, the teams are excited to race alongside visiting international clubs and other local teams from Aitutaki.

Development of paddlers has always been a priority of Ngakau Toa Vaka and now more than ever, with both of the clubs men’s and women’s teams being coached under the leadership of new and young coaches.

Tupuna Amo, a decorated paddler for the club since joining as a junior and later representing the Cook Islands at many international paddling events with impressive podium finishes, oversees the men’s team.

Both teams are set to field open and mixed iron this morning, mixing the experience of the club’s long time paddlers with the youthful energy of juniors and those new to the sport of oe vaka.

Always passionate about developing junior paddlers, Melvin’s ongoing support and guidance is a source of inspiration for the junior paddlers joining the open teams.

Recently returned from the K1 and Surf Ski Championship in New Zealand and the epic Te Aito race in Tahiti, international champ and club member Ioana Puna will be a welcome addition to the six-strong women’s crew hitting the water today.

Mixing it up certainly won’t be fazing the NTV Men’s team either. Joining coach and top local steerer Tupuna Amo in the iron race will be a combination of under 19’s, open and master paddlers.

Still energized by the double wins at the recently-held round Rarotonga change over race, both teams are keen to see how their successful combinations stack up against the battle of the iron, an 18km marathon race towards Avana Passage and back into “Jack’s Harbour”, with some impressive surfing opportunities on the cards.