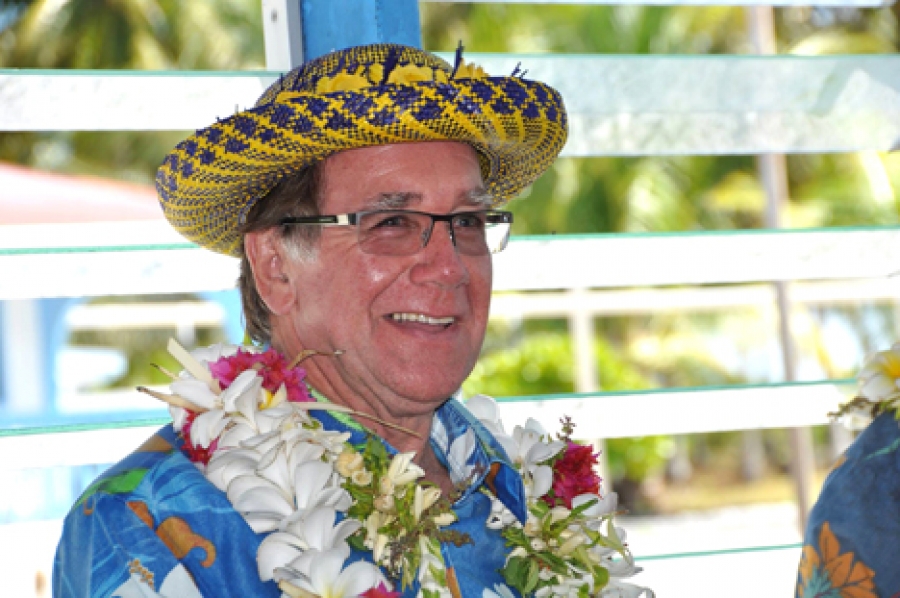 It is said that being grateful is one of the key’s to happiness.

If this is so, then the isolated Pa Enua communities of the Cook Islands are without a doubt some of the happiest people on the planet.

Last week a delegation of local and New Zealand government officials made a special visit to the northern group islands of Penrhyn and Manihiki for the opening of the ‘Huira Natura ke Tokerau’ solar projects.

On both islands, the delegates were at the receiving end of island gratitude.

The visiting delegation to the north was led by Prime Minister Henry Puna and included members of his Cabinet and New Zealand delegates including Minister of Foreign Affairs Murray McCully, MPs Winston Peters and David Shearer and Pacific Economic Ambassador Shane Jones.

The $20.5 million solar project, funded by the New Zealand government, is part of an ambitious overall plan by the Cook Islands Government to have the island nation powered 100 per cent by renewable energy by 2020.

Initially, the project was met with some concerns of its impact on the lifestyles of the communities however as the island residents learned of the benefits of generating their own electricity through solar power – the project rolled out smoothly across the north.

The completion of the projects on Penrhyn and Manihiki was cause for colourful celebrations and the opening ceremonies were an opportunity for the island residents to show their gratitude.

Before last week’s opening ceremony, the communities on both islands spent months preparing the programme for the solar project opening ceremony, including the careful management of food resources in order to serve up the finest northern group delicacies and weaving iconic rito hats.

As the delegates arrived for the milestone occasions, residents took off their hats to say meitaki and in doing so, gifted close to 100 intricately woven rito hats among other gifts of crafts.

In both Penrhyn and Manihiki, political leaders were adorned with tiers of stunning natural and coloured rito hats.

Valuable hats that represent the essence of the people of the north for the time it takes to prepare and weave a creative rito hat from the resources available to them in their far-flung communities.

Preparations of materials for a rito hat can take a month of more from gathering the tender unfurled fronds of a coconut tree (rito), stripping the material, soaking, re-stripping, drying, dying in readiness for weaving.

A skilled weaver can take five full days to create a rito hat which can also be adorned with pearls and shells.

Skilfully crafted rito hats can fetch up to $350 and the gift of more than 100 rito hats to the visiting delegates clearly shows the gratitude of the northern group communities to government officials for successfully rolling out the solar projects.

As well as large Cook Islands feasts and fine hats, impromptu dancing, singing and contagious joy was all part of the gratitude-showing events in the north for the special guests.

Images from the grand opening events and gift giving ceremonies, shared by Aitutaki businessman Michael Henry, have generated a storm of pride on social media from Cook Islanders all over the globe.

“Wow those hats are absolutely stunning!” wrote one follower of the image gallery from the north posted by Henry.

“I hope they know how valuable those hats are, I’m jealous!” wrote another.

In some families, rito hats are reserved only for the elders of the clan, symbolising their status and drawing respect for the wearer.

Henry says there was certainly overwhelming generosity by the communities at the events on both Penrhyn and Manihiki.

He was on the trip as a member of the steering committee for the northern group solar project and to assist with the fireworks display which he suggested would be a great addition to the traditional blessing ceremony for the solar projects.

For many of the children in the two isolated communities, it was the first time they had ever seen a fireworks display.

On Penrhyn the fireworks were let off after the official delegation departed for Manihiki and the task of setting of the fireworks was given to the island’s police officer, Ben Rangi.

“The whole area was full of kids and parents – full!” Rangi wrote.

“They loved it and when the fireworks started to fly, the kids and people shouted with joy!”

He then passed on the message that the kids have asked to have another fireworks display.

“This is the first time this has happened on Penrhyn and they told me to tell you to send some more up for Christmas!” says Rangi.

“Mike thanks you very much – it was a big night in Penrhyn, everybody came to watch the fireworks and it was beautiful.”

The fireworks on both Penrhyn and Manihiki were funded by the Cook Islands and New Zealand governments along with Powersmart who designed and built the solar-powered hybrid energy systems and McDowell and Beca.

As the solar panels kick into action and the projected outcome results in people benefiting from less reliance on expensive fuel-generated power, the gratitude of the north will continue to flow for generations to come.

CI News would like to thank Michael Henry for sharing his stunning images from the north of the opening ceremonies for the solar projects and of the beautiful people and communities of the north.