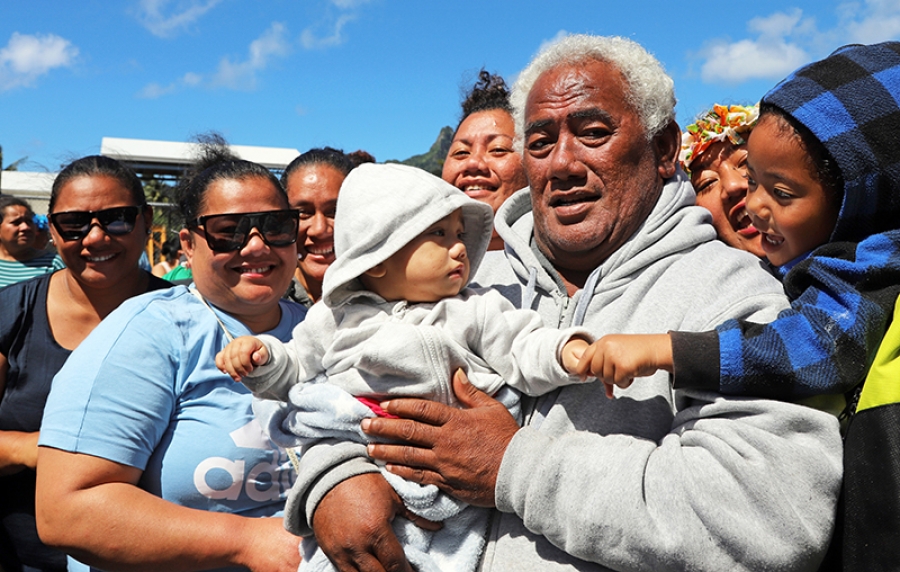 Emotions ran high at Avatiu wharf yesterday afternoon as 390 northern islanders, including this group, said a tearful goodbye to family and friends before boarding the vessel Nivaga III for their return voyage to Pukapuka and Nassau. Hundreds crowded the wharf to farewell them, among them prime minister Henry Puna and a number of Cabinet ministers and high-ranking government officials.

There were tearful embraces and red-rimmed eyes aplenty at the departure of the Nivaga III for Pukapuka, Nassau, Rakahanga and Penrhyn yesterday – but also smiles, laughter and happy faces too.

Departing outer islanders and the family and friends farewelling them thronged Avatiu Wharf, even as last-minute items of cargo were also being loaded onto the waiting vessel.

“I think everybody really enjoyed themselves here – especially our people from the outer islands,” Turua said of this year’s Te Maeva Nui.

“For some of them, this is their first time being here (in Rarotonga), and it’s a milestone for them to be here – especially the young ones.

“Now they’ve seen the bright lights and they’re all heading back to their islands. And it’s business as usual when they get back home.” Once the Nivaga III was loaded up with all its northbound passengers and freight for the islands of Pukapuka and Nassau, General Transport’s Layar Mas barge was ready and waiting to slide into place for loading with Rakahanga and Penrhyn-bound cargo.

“The barge should leave either tomorrow or Wednesday,” explained Turua, adding that there was still some Manihiki cargo left waiting on the wharf that hadn’t been able to fit on the Tahiti Nui, which departed on Saturday.

“I think it’s been quite successful,” he said of the loading. “The operation has been really quite tight, and a lot of people have been working long hours, just to try and get all the cargo on the boat.”

As for the people of the pa enua: “We’ll be looking forward to seeing them again at the next celebration in two or three years’ time,” said Turua.